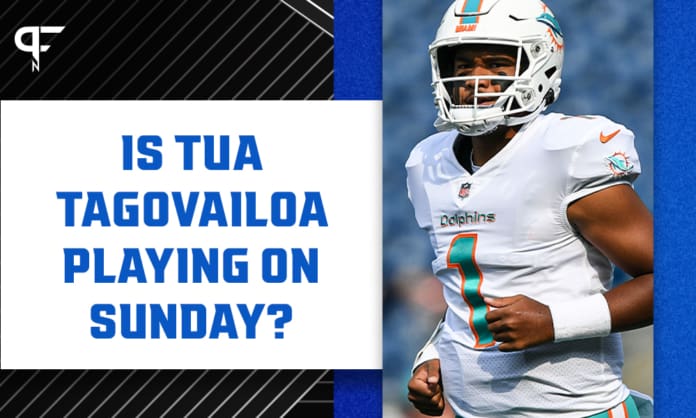 The Miami Dolphins may be without star QB Tua Tagovailoa on Sunday vs. Las Vegas. Here's the latest on the Dolphins QB ahead of Week 3.

By Cam Mellor
September 22, 2021
What's in this article? Click to show
Tua Tagovailoa exits Miami’s game vs. Buffalo
The latest on Tua’s ribs
Will the Dolphins QB play against Vegas in Week 3?

The Miami Dolphins are but a few players away from competing in the AFC East. However, the Dolphins certainly cannot compete without a competent QB, and the latest injury to Tua Tagovailoa has the 2021 season seemingly paused. Tagovailoa’s status will be the talk of the NFL as the Dolphins prepare for a battle with the 2-0 Las Vegas Raiders in Week 3.

Tagovailoa was in the game for just 9 snaps against Buffalo in Week 2. The Dolphins QB went out after Bills DE A.J. Epenesa rocked him from his blindside and slammed him into the turf. Tagovailoa laid on the ground for a few agonizing moments before eventually making his way to the sidelines.

Tua left the field on a cart later in the first quarter and was not seen on the sidelines in the second half. He was ultimately diagnosed with bruised ribs after undergoing tests.

Prior to the injury, Tua had attempted 4 passes, completing just 1 for 13 yards. He was sacked twice on a short afternoon, and the hapless Dolphins were shut out, 35-0. Jacoby Brissett filled in as the Dolphins QB, finishing the day completing 24-of-40 for 169 yards and 1 interception.

Brissett was sacked 4 times by the Bills, having to scramble away from pressure on multiple occasions as well.

“I think as a team we all struggled,” Dolphins OT Austin Jackson said.

The latest on Tua’s ribs

After leaving the game and undergoing tests, Tua’s initial diagnosis was good. It was said he had bruised ribs though he was in significant pain. Considered day-to-day, head coach Brian Flores explained on Monday that X-rays came back negative.

Despite not being seen on the sidelines against the Bills, Flores also mentioned Tagovailoa had attempted to return to action on Sunday. He’ll continue to be monitored throughout the week, especially when the team hits the practice field on Wednesday.

However, on September 22, it was revealed that Tua has fractured his ribs.

Will the Dolphins QB play against Vegas in Week 3?

The burning question remains for the Dolphins in Week 3: Will Tua start in Week 3?

The answer has become more clear as the week progressed. As it stood early in the week, Flores was hopeful that Tua would practice on Wednesday. However, ahead of Wednesday’s practice, Flores broke the news that Tua had fractured his ribs and would not be available in Week 3.

With Tua unable to play, Miami is left with Brissett and perhaps activating Reid Sinnett from the practice squad. Miami couldn’t muster a single point with Brissett at the helm. Now, they rank 31st in the NFL in point differential at -34. Only the Atlanta Falcons have been outscored more at -49.

We will continue to monitor Tagovailoa’s injury status as the weeks progress. Stay tuned to Pro Football Network.