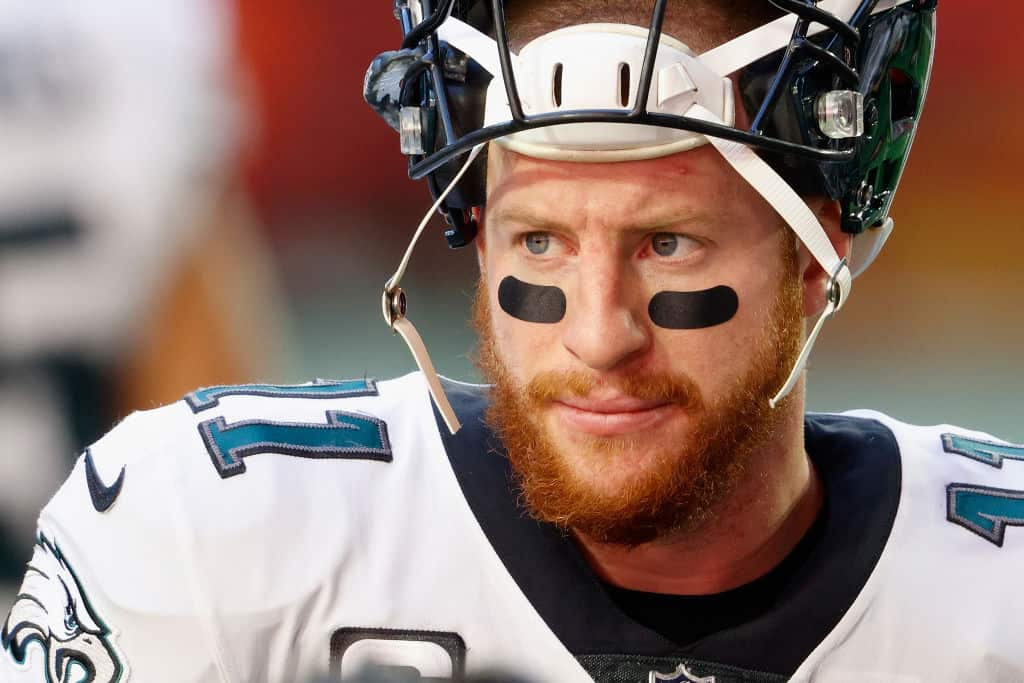 Sick of the Philadelphia Eagles/Carson Wentz soap opera? Well, bad news, buddy — nothing has even happened yet! Carson Wentz trade rumors and speculation are likely to continue for another week or two now that the Eagles and their potential trade partners (most notably the Indianapolis Colts and the Chicago Bears) have retreated to neutral corners to ponder their plans.

So, whether you are hoping Wentz is your team’s quarterback in 2021, hoping he’s your hated division rival’s quarterback in 2021, eager to see what Jalen Hurts can do as the Eagles’ starter, or just hate it when week after offseason week is dominated by the same handful of storylines, you’ll just have to wait a little longer for Wentz resolution.

In the meantime, here’s some straight talk about what’s going on, why so little is happening, and what an inevitable Wentz trade is likely to encompass.

Why the Carson Wentz trade is taking so long

The entire Wentz trade saga can be summed up in 62 simple words.

If Carson Wentz can be repaired, then he can become one of the NFL’s best quarterbacks. Yet, the Eagles appear to have lost all interest in repairing Wentz. And reports suggest that he may not be interested in repairing himself. Potential trade suitors are factoring the Eagles’ willingness to part with Wentz into their offers for Wentz. However, the Eagles are not.

The Eagles appear to be taking the everyone’s-a-sucker-but-us approach to trade negotiations: “Sure, Carson Wentz cratered, took the whole team with him, handled the Hurts competition terribly, got a coaching staff full of guys with Super Bowl rings dismissed, and shoved all the goodwill he built up over four previous seasons as the face of our franchise down a garbage disposal in just a few weeks. But hey, he’s perfect for you!”

You can’t really blame the Eagles for trying to tout Wentz as much more than he currently is. General manager Howie Roseman was with the organization when they traded what was left of Donovan McNabb to Washington for a second-round pick plus some change in 2010.

Roseman then traded the unheralded Kevin Kolb (McNabb’s initial chosen successor) for Dominique Rodgers-Cromartie and a second-round pick in 2011. Roseman also netted a first-round pick from the Minnesota Vikings for Sam Bradford at the start of the 2016 season.

The Eagles have a knack for getting other teams to pay for the right to haul their quarterback mistakes away. Consequently, Roseman saw the Detroit Lions get two first-round picks and Jared Goff for Matthew Stafford, noted that overmatched Chicago Bears general manager Ryan Pace was still employed and in need of a quarterback, then went into hard-sell mode.

The 2021 QB market still has plenty of options

Unfortunately, the Eagles were unable to create a false sense of urgency with their “someone else was checking out that station wagon an hour ago and just ran home to get their checkbook” tactics. There are simply too many variables on the quarterback market right now for even Ryan Pace to make hasty decisions.

Veterans like Russell Wilson and Aaron Rodgers are murmuring their displeasure with their current teams. Names like Kirk Cousins and Matt Ryan are floating on the breeze. Second-tier draft prospects are getting first-round buzz. And the chipped-and-dented aftermarket features plenty of names from Sam Darnold to Cam Newton.

It was one thing for Stafford and Sean McVay to click over quesadillas and margaritas, resulting in an expedited blockbuster. It’s quite another thing to try to extract multiple first-round picks in exchange for an unwanted quarterback from a general manager who could instead get Jameis Winston for an incentive-heavy one-year deal, Florida’s Kyle Trask in the middle of the first round, or Deshaun Watson if he waits until Jack Easterby’s charm spell wears off.

The latest reports have the Colts offering two second-round picks for Wentz. Such a deal would make sense for both sides. The Colts have the cap space to swallow Wentz’s salary, Frank Reich on hand (along with former Eagles assistants Press Taylor and Mike Groh) to rebuild Wentz’s delivery/confidence/everything else, and a roster strong enough to absorb the loss of some Day 2 picks.

The Eagles need draft picks that can turn into affordable starters as they shed salary for 2021. “Two second-round picks” sounds impressive enough if you say it really quickly for Roseman to save face.

The Bears trade rumors that circulated last week looked more like headache-for-headache deals. One rumor — Wentz for Tarik Cohen, Nick Foles, and a first-round pick — had a devious logic to it, with the Bears trading away one failed Eagles-based quarterback solution for another and the Eagles bringing Foles back for the sheer meme value as both teams swapped regrettable contracts and damaged goods.

A first-round pick is worth more than two years of second-rounders. Cohen is an exciting player in theory if not in practice. Yet, Pace appears to have figured out that he was negotiating against himself.

The Eagles have until the start of the league year to trade Wentz. With no overwhelming offer on the table, they may wait a week or two for official 2021 cap numbers to be finalized, restricted free agent tenders around the league to be made, rumors about disgruntled Wilson-level quarterbacks to simmer down, and other housekeeping chores that will make everyone’s cap situations clearer.

At the same time, a $10 million bonus kicks in if Wentz is on the Eagles’ roster a few days after the start of the league year. Roseman and the Eagles cannot afford to dilly-dally in the hopes that Washington suddenly enters the bidding, only to discover that the Colts nabbed Marcus Mariota for a third-round pick, the Bears opted for Darnold, and the Wentz market has suddenly dried up.

What happens after the Carson Wentz trade

Things will likely get off to a rocky start. The Eagles will still be about $25 million over the cap after they trade Wentz. They have lots of key players from the Super Bowl era who are in their 30s and disenchanted.

And if you checked out on Hurts after he led the team to victory against the New Orleans Saints, you missed the part where he finished the 2020 season with just a 52.0% completion rate. The Eagles are not trading Wentz because Hurts was outstanding; they are trading Wentz because he responded disastrously to the Hurts challenge.

Which Wentz do you get?

Any team that trades for Wentz faces the possibility that they are getting the “uncoachable” guy described in Jeff McLane’s Philadelphia Inquirer report on the disintegration of the Eagles/Wentz relationship. The Colts’ and Bears’ offensive staffs are full of coaches who have worked with Wentz in the past. Neither team would make an offer for Wentz if they felt he was beyond help.

At the same time, coaches often overestimate their own excellence. If Colts assistants Taylor and Groh really were “Wentz whisperers,” everyone would be living happily ever after in Philly. Similarly, if Bears passing game coordinator John DeFilippo were the crackerjack quarterback repairman he is billed as, the Bears would be signing Mitch Trubisky for $120 million this offseason.

There’s a chance that even a modest Carson Wentz trade ends up hurting both parties. That said, it’s unusual for a quarterback with Wentz’s accomplishments and potential upside to hit the market. The team that eventually acquires him can be forgiven for trying to “buy low” on someone who would have been untouchable 12 months ago.

The trick will be getting Wentz for as low a cost as possible. After all, neither the Bears nor Colts really need to make a trade. The Eagles, on the other hand, left themselves with no other choice.