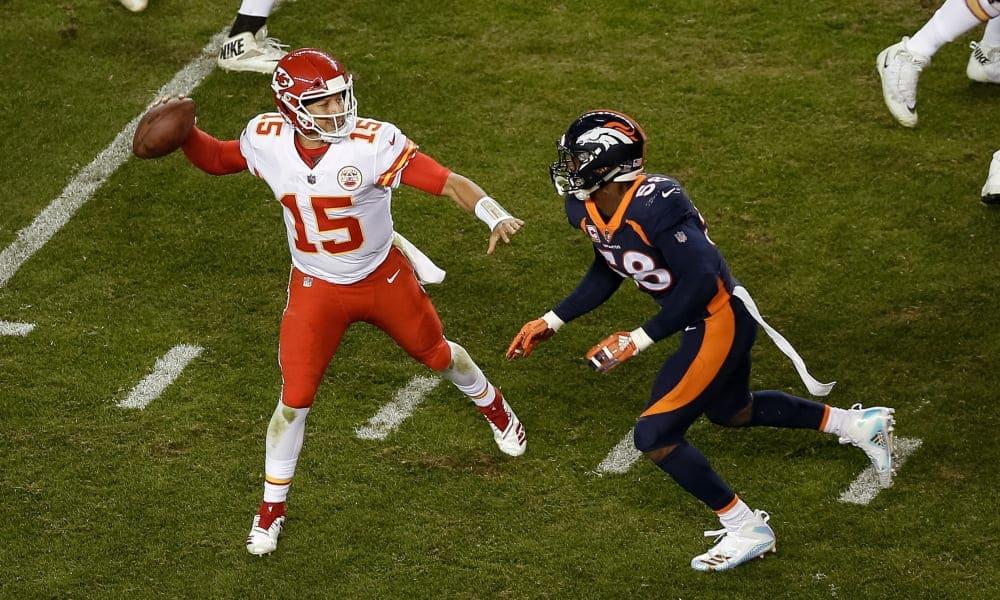 The landscape of the NFL and the AFC West has changed after the Kansas City Chiefs provided quarterback Patrick Mahomes with a massive 10-year contract extension. Despite losing the last nine contests against the Chiefs, the Broncos have attempted to build a team that is capable of dethroning Mahomes and the Chiefs. How exactly does Mahomes’ contract extension impact the Broncos approach over the course of the next ten seasons?

Chiefs and QB Patrick Mahomes have reached agreement on a 10-year — 10-year! — contract extension that ties him to Kansas City through the 2031 season, league sources tell ESPN.

Mahomes vs the Broncos

The Mahomes era against the Broncos began on December 31, 2017, during the Broncos season finale at home. The Broncos defense was depleted at the time, but Mahomes created various highlight-reel plays against Denver in this game. Mahomes’ NFL debut wasn’t the best but he flashed some of the traits that we have all seen over the course of the last two seasons.

For a team that is young with a lot of potential, the Broncos can’t look at Mahomes’ contract extension as a sign to throw in the towel. In the Broncos’ end of the season press conference, general manager John Elway highlighted the significance for the organization to compete with Kansas City.

Despite Patrick Mahomes’ contract extension, the Broncos will have to discover a way to compete with him for the division.

How can the Broncos slow down Mahomes?

While the NFL has yet to establish a formula for slowing down Mahomes, the Broncos will have to discover the blueprint if they hope to win the division title. Broncos head coach Vic Fangio has been widely regarded as one of the best defensive minds in football.

In 2018, NFL teams couldn’t figure out how to stop the Los Angeles Rams high-octane offense, but Fangio figured out how to slow down Jared Goff and Todd Gurley. Fangio’s Bears’ held the Rams to 214 yards of total offense while sacking Goff three times and forcing four turnovers.

As the Broncos believe they can generate pressure on Mahomes in 2020, their secondary will have a strong task of slowing down the Chiefs’ explosive weapons at their skill positions. The Broncos brought in cornerback A.J. Bouye to help them limit Tyreek Hill’s explosive plays down the field.

If the Broncos can pressure Mahomes consistently, it will create opportunities for the secondary to generate takeaways against the Chiefs. In the Broncos and Chiefs last five matchups, Denver has only forced three turnovers. That will have to change if they hope to compete with the Chiefs for the division title.

Does Patrick Mahomes’ contract extension impact the Chiefs ability to add talent around him?

Much of the talk surrounding Mahomes’ contract extension involves whether or not the $450 million will impact the Chiefs’ ability to surround him with talent over the course of ten seasons.

According to Pro Football Network writer Ben Rolfe, Mahomes’ contract is heavily favored with guarantees in signing bonuses rather than having a loaded base salary. Mahomes’ overall cap hit won’t impact the Chiefs too much over the course of the next few seasons, which would allow for them to surround Mahomes with more talent in Kansas City.

Offensively, the Chiefs have surrounded him with a lot of talent and younger depth players that are relatively affordable. The Chiefs will need to focus some of their efforts on adding defensive talent and depth over the course of the next three seasons to help create balance for their team.

For the Broncos, they will continue to match up with the Chiefs as best as they can, while developing their young roster in hopes of competing against Mahomes and Kansas City for the division title over the course of the next ten years.