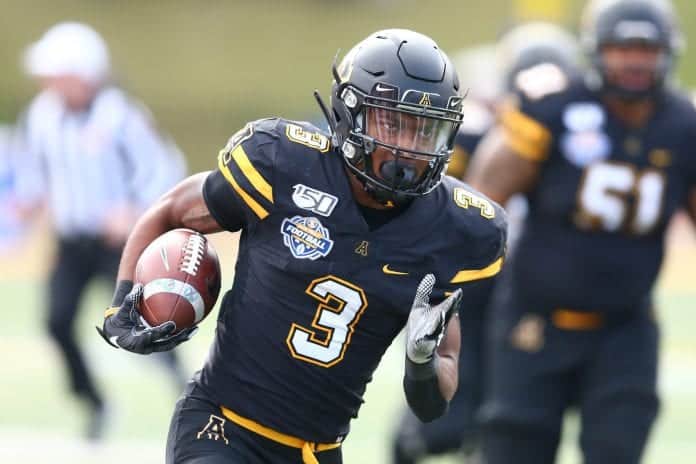 How does running back Darrynton Evans fit in Titans offense?

Rookie running back Darrynton Evans is expected to carve out a role in Year 1 for the Tennessee Titans. But what will that role look like?

Running back Darrynton Evans is looking to become the next great attraction for the Tennessee Titans. Ever since the team’s move from Houston, anyone who has experienced NFL football in Nashville has plenty to discuss in the brief history of the team.

The Music City Miracle that propelled them to a Super Bowl appearance, the gut-wrenching loss in that Super Bowl, and even some of the players who have given fans plenty of excitement the last two-plus decades.

Steve McNair is a legend in the city of Nashville, and while everyone wonders who the next quarterback will be to deliver Tennessee consistent postseason success, there is one position that has been consistently productive for the team: running back.

Former Titan greats such as Eddie George, Chris Johnson, and even DeMarco Murray have quite a bit in common. For one, they played for the Titans. Second, they set expectations for future ball-carriers by making Pro Bowls. And lastly, they each finished their best season with the team as one the league’s top-five players in rushing yards.

That torch has since been passed to current starter Derrick Henry, who posted a league-leading 1,540 rushing yards in 2019. However, we aren’t here to discuss how vital Henry is to the Titans and their running back room.

Instead, we are going to look beyond Henry and focus on the potential of his backup, Evans, and how he fits into Tennessee’s offense.

Who is Darrynton Evans?

Evans, listed at 5-foot-11 and 203 pounds, was selected in the third round (No. 93 overall) of the 2020 NFL Draft. He played his college ball at Appalachian State, where he earned the Sun Belt’s Offensive Player of the Year award last season.

Evans ran for an impressive 1,480 yards and 18 touchdowns, which were both good enough for a top-10 finish in the nation. It was a single-season performance good enough to catch the eye of general manager Jon Robinson.

In other words, the talent is there for Evans.

How will Evans fit in at running back for Tennessee?

Trying to determine how Evans will be used this season and beyond are questions that could have different answers. Before the team made their selection, it was clear that they required a quality backup at the running back position after Dion Lewis was cut earlier in the offseason.

But what are the duties of a running back sitting behind Henry on the depth chart?

The numbers above should help answer the first question: How does Darrynton Evans fit into the offense this season? As you can see above, Henry leaves little room for his backup to make his mark in the run game, so to answer that question, you would have to start by looking at Lewis over the last couple of seasons.

Diving into the numbers for Dion Lewis

In 2019, the former Patriot was on the field for 402 snaps. Yes, that feels like a lot, but let’s look further. He only played on 66 rushing snaps, and of those, 54 of them were actual carries by Lewis, which he turned into 209 yards with a 3.4-yard per carry mark. The rest of his game action was spent in passing situations where he brought in 25 receptions (on 32 targets) for 164 yards and one touchdown.

Related | Tennessee Titans: The top 5 defensive players 25 or under heading into the 2020 season

Lewis was used as a third-down, change-of-pace option for Henry, and the Titans would like to have another guy who can come in and take on a similar role. But they’re also a more effective player for that role.

That is where Evans comes into play.

Evans, once a receiver, now a running back

Evans was the Sun Belt Conference Offensive Player of the Year last season because of his blazing speed and one-cut running style out of the backfield. Before becoming the premiere guy for the Mountaineers, however, Evans was slated to be a slot receiver during the 2017 season.

According to an interview with the Winston Salem Journal, then head coach Scott Satterfield, who is now at Louisville, had this to say about the versatile athlete:

“I thought he looked great and natural right back at wide receiver, and it looks like he’s put on a little weight as well. He’s going to be one of the more dynamic players on our offense heading into next fall and can play a bunch of positions. He’s so smart and talented, I don’t want him standing beside me. We have to find ways to get him on the field.”

With that said, Evans should be more than equipped to handle the blocking and receiving duties out of the backfield while Henry grabs some water on the sideline, but what about rushing opportunities?

What does Evans bring to the table

No one can deny Evans’ rushing ability, but judging by the 2019 numbers, there won’t be enough carries available while Henry is around. However, he may earn more carries if he shows that his combination of speed and one-cut ability has translated effectively to the NFL.

Speed, and what he can do with it, is more critical in this situation because of how it can change the pace of the game.

Evans blazed the combine with a 4.41 40-yard dash, which finished second amongst his position at the 2020 NFL Combine. After several downs of Goliath running through the defense, you can affectively sneak a speedy David into the mix to throw the defense for a loop.

If he wants to be a valid No. 2 option, Evans will have to beat out guys like Dalyn Dawkins and Senorise Perry, who was a free agent pick up this offseason. But considering the two have combined for a total of 22 career carries, that shouldn’t be much of a problem.

We also can’t forget about Khari Blasingame, a third-year fullback capable of handling work out of the backfield, and tight end Jonnu Smith, who has also worked in the backfield as a ball carrier (four carries, 78 yards in 2019). But those two shouldn’t hinder many — if any — opportunities for Evans.

To answer the second question of how might Darrynton Evans be used in the offense beyond 2020, it’s going to be more complicated. A lot of this answer will depend on Henry’s future with the team, but there are answers to both situations.

If Henry can get a long-term deal, you could see 1-2 punch with a typical “Thunder and Lightning” twist. Maybe a similar situation to the Chris Johnson-LenDale White carry distribution from 2008 when Johnson got 251 carries to White’s 200. But more than likely, it’ll compare more to the duo’s 2009 numbers when Johnson out-carried White 358-64.

The other aspect is the usage in the passing game where Evans can find a significant role if he can prove to be effective. In addition, the former Mountaineer will likely have a role as a return man.

Henry should still be the focal point of the offense, but the change-of-pace potential that Evans brings to the table will likely mean a significant role in the future.

But can Evans be the featured back in Nashville if Henry decides to leave? His college game shows that kind of potential, and what he does with his opportunities this year will further answer that question. And considering his size mirrors Chris Johnson’s during his time in Tennessee, he should at least be given the opportunity to be that guy.

With his ability to make plays in the run and passing games, Evans could make a good living with the Titans. Oh, and you also can’t forget the track record Nashville has on its running backs.