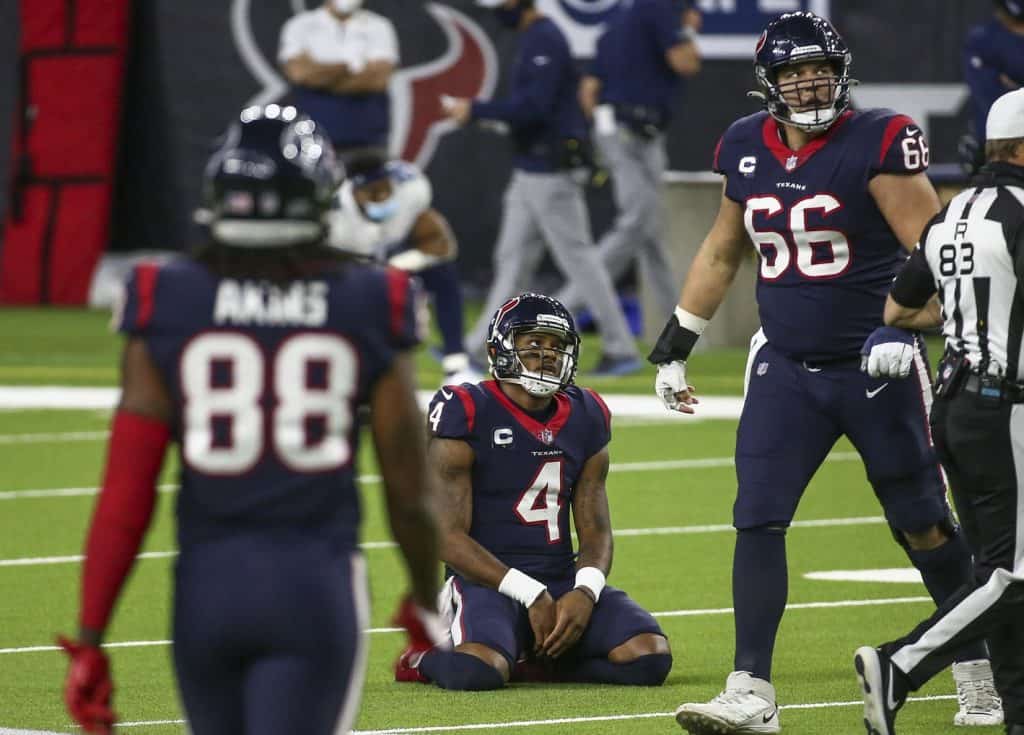 Jan 3, 2021; Houston, Texas, USA; Houston Texans quarterback Deshaun Watson (4) looks up after a play during the fourth quarter against the Tennessee Titans at NRG Stadium. Mandatory Credit: Troy Taormina-USA TODAY Sports
What's in this article? Click to show
The Texans project to be around $31 million under the salary cap in 2021
Houston has a handful of potential options for releasing players
The Texans have players they can extend or restructure to create cap space in 2021
Want more NFL news and analysis?

After a disappointing season in 2020, what is the salary cap situation for the Houston Texans entering the 2021 NFL season? Let’s take a look at the Texans’ salary cap situation, as well as which players they could release, restructure, or extend to create additional salary cap space in 2021.

As it stands, the Texans have just under $149.5 million in commitments to their top 51 highest-paid players, with $10.3 million by virtue of Bradley Roby’s suspension, and an additional $3.1 million in dead money. As such, the Texans are currently around $31.3 million over the salary cap heading into 2021.

These numbers do not include the new deal for David Johnson. Once the numbers are confirmed in terms of salary cap hit in 2021, we will update the specifics.

Houston has a handful of potential options for releasing players

In a turbulent offseason that has seen quarterback Deshaun Watson demand a trade, the Texans have already been extremely active in addressing their salary cap. They recently restructured David Johnson’s contract to reduce his salary cap number by around $4 million. Could we see the Texans willing to release some players for 2021 relief?

Could the Texans move on from Benardrick McKinney this offseason?

In 2020, McKinney played in just four games for the Texans. However, his salary cap numbers for the next three seasons are $7.9 million, $10.3 million, and $10.3 million, respectively. The Texans could save $6.4 million in salary cap space in 2021 if they were to release him this season.

The Texans have some question marks on defense. Houston may replace the former second-round selection with a cheaper option, either in free agency or the draft.

Who else could the Texans consider moving on from in 2021?

Interior defensive lineman Brandon Dunn is due to count $4.2 million against the Texans’ salary cap in 2021. In 2020, he did not register a single sack or tackle for loss in 13 games. Releasing him would save the Texans $3.2 million in salary cap space in 2021.

Right guard Zach Fulton was credited with allowing 7 sacks and 20 blown blocks, per Sports Info Solutions. He is due to count $3.8 million against the Texans’ salary cap in 2021. However, releasing him would save the Texans $3 million.

Darren Fells has been a solid contributor for the Houston Texans at tight end. Yet, in 2020, he was targeted just 28 times, resulting in 312 receiving yards and 4 touchdowns. He is due to count $2.8 million against the Texans’ salary cap in 2021. Releasing him would save the Texans $2.3 million.

The Texans have options for potentially restructuring contracts in 2021. Additionally, a couple of players are due for contract extensions in the next season or two.

The Texans have the option to restructure Brandin Cooks’ deal

After the Texans traded for Brandin Cooks, they received the wide receiver on a below-market contract. Over the next three seasons, Cooks will average just $13 million in salary cap space. That number comes as a relative bargain for the Texans, leaving wiggle room to move money into the future if necessary.

The Texans could also consider restructures for Laremy Tunsil, Whitney Mercilus, Zach Cunningham, and Randall Cobb if they want to open further cap space to make moves in free agency.

The Texans have some decisions to make in terms of extensions

Justin Reid has been a big contributor for the Texans at the safety position since being drafted. Entering the final year of his rookie deal, the Texans could potentially save $1.2 million in salary cap space by extending Reid in the 2021 offseason.

Jordan Akins’ impact has been somewhat less than Reid’s. However, he has shown flashes of being a good tight end for the Texans. If they extended him, they could save a further $1 million in salary cap space in 2021. The most likely outcome is that the Texans either consider releasing Akins to save $2.2 million in 2021 or allow Akins to play out the final year of his deal before letting him hit free agency in 2022.