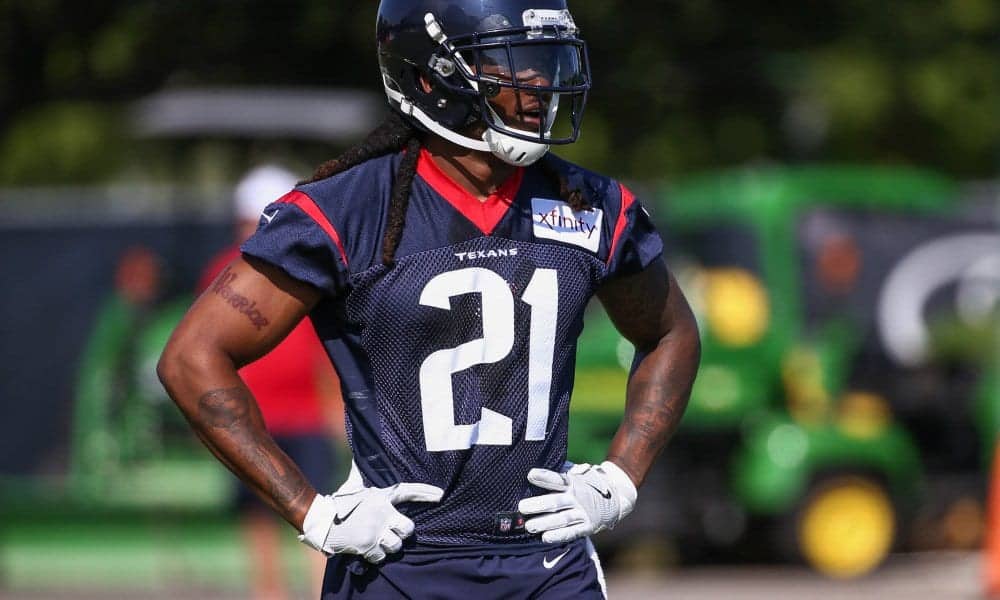 Photo Credit: Troy Taormina-USA TODAY Sports
What's in this article? Click to show
What Roby brings to the field
By the numbers
Extending Roby is imperative

In an eventful yet underwhelming offseason for the Houston Texans, Bradley Roby was the prized free-agent signing. The departures of Kareem Jackson, Kevin Johnson, and Tyrann Mathieu left Houston’s secondary in a barren state. They counteracted that by bringing in Roby along with Tashaun Gipson.

During his five year career in Denver, Roby’s play was full of inconsistencies. At times he flashed cornerback one caliber play. At other times, he made a lot of people wonder why the Broncos spent a first-round pick on him. Through the early goings of his tenure in Houston, he’s been more than worth the investment for the Texans.

What Roby brings to the field

Coming out of Ohio State, Roby’s physical traits were well documented. Aside from his sub 4.4 forty-yard dash, Roby’s 1.47 ten-yard split is in the 96th percentile. The speed numbers were nearly off the charts. However, he also posted impressive results in the explosion and agility drills along with a bench press with 17 reps. How does that athleticism transfer to the field, though?

With Houston’s coverage schemes, you won’t see many deep shots against. Romeo Crennel favors conservative looks in order to keep the play in front of his defensive backs and minimize the chance of getting beat deep. Thus, Roby rarely carries his man vertically downfield, even though he has the speed to do so. He’s proven effective in other areas, however.

Roby possesses a refined combination of patience and calculated footwork. He sits well in his backpedal and stays light on his toes to mirror opposing receivers into their breaks. Roby uses his hands well with the veteran savvy not to overdo it and risk penalty as he’s drawn no flags yet this season.

Undoubtedly Houston’s best cover cornerback, Roby especially excels guarding intermediate routes over the middle of the field. He routinely clings to his man’s hip pocket and displays pinpoint timing to punch through the catch point and disrupt the pass. On the rare occasion that he does get beat over the middle, Roby showcases robust recovery speed trailing his man and maintains adequate spacing.

It hasn’t taken long for Roby to adapt to Houston’s scheme. He’s been sound in his reads and diagnoses plays well. He has a knack for staying in phase when in coverage and is very clean in just about every facet of his game. The one area you’d like to see more of an impact is in run support. Roby isn’t the most enthusiastic run defender. However, he handles one on one situations well and throws his body around when filling run lanes.

The Texans have deployed Roby on a slot blitz these past few weeks. He has the speed to get to the quarterback but just hasn’t been able to finish quite yet. If Houston keeps sending him on one or two of those each game, he’s in line to rack up his first sack since 2017.

As long as a cornerback is locking down their man, there shouldn’t be much, if anything, to complain about. Even so, Roby’s ball skills aren’t necessarily a strength in his game. He’s posted some good ball production in the past. Even then, he hasn’t secured more than two interceptions in a season. Generating turnovers is what stands in the way of Roby being mentioned in the upper echelon of corners.

Nonetheless, Roby has fit right in and has made his impact felt from Week 1. He’s been a stud in man coverage and displays extreme comfort in zone. With a fully loaded athletic package and the seasoning of a vet, Roby is really starting to come into his own as a part of the Houston Texans.

Bradley Roby with a good play here. Able to see the route, plant and break up the pass. #Texans pic.twitter.com/pncFXzvpDt

Unlike offensive skill players or even front seven defenders, you can’t just take a glance at the stat-line of a defensive back and expect to be told how that player is performing; although numbers never tell the full story. Regardless, I went through every snap Roby has played this season and tracked his targets and catches allowed, among other tidbits.

For the most part, Roby has been tasked with covering the opposing team’s top wide receiver. He’s typically on the right side of the defense. Although, since the release of Aaron Colvin, Roby has served as the team’s primary slot cornerback. He’s had bouts with Michael Thomas, Keenan Allen, Julio Jones, and others, but has held his ground in each encounter.

Through the first five games, Roby has been thrown at five times or less each week. He hasn’t surrendered more than 50 yards in a contest as he’s posed a lockdown presence. Per game, he’s averaging less than 35 yards given up. Per target, that mark is at 7.9 yards allowed.

The toughest part of the schedule is out of the way for Roby after facing some stud receivers. He’s sure to be tested this upcoming week against Patrick Mahomes and the Kansas City offense. Besides that, two meetings with T.Y. Hilton and a visit of the New England Patriots in Week 13 are the lone feature matchups left on the docket.

According to the injury report, it’s unclear whether Tyreek Hill and Sammy Watkins will play. Regardless, Roby will have solid matchups with the resurrected Demarcus Robinson and young threats of Byron Pringle and Mecole Hardman.

This could be the first week we really get to see Roby tested deep down the field. Crennel is bound to employ heavy zone schemes against Kansas City. However, the Chiefs are still going to take their share of vertical shots, which could come at Roby’s expense or delight.

The Texans already face future dilemmas with the contracts of Whitney Mercilus and D.J. Reader expiring. The front office, or lack thereof, has their work cut out for them in attempting to extend all three of these core defensive players. You could make the case for each of them as the team’s top priority. Instead, their first course of action was to extend Nick Martin. Although, you have to admire their want to keep the offensive line intact.

Coming over on a one year, “prove it deal,” the Texans seriously lack security at the cornerback position. There’s no guarantee that Roby returns. Plus, Johnathan Joseph will be going on 36 years old following the season. Houston could be without both starting corners at that time. There’s hope that Lonnie Johnson can continue to develop, but he hasn’t shown enough to warrant a full-time spot quite yet.

As Houston’s most talented and versatile cornerback, Roby has been a mainstay of the defense and for my money, the best player in their secondary. Set to be 28 years old next season, the former Buckeye’s career may not even be halfway done yet. The best football is ahead of Roby, and hopefully, it unfolds as a member of the Houston Texans.

In this article:Bradley Roby, Featured, featured