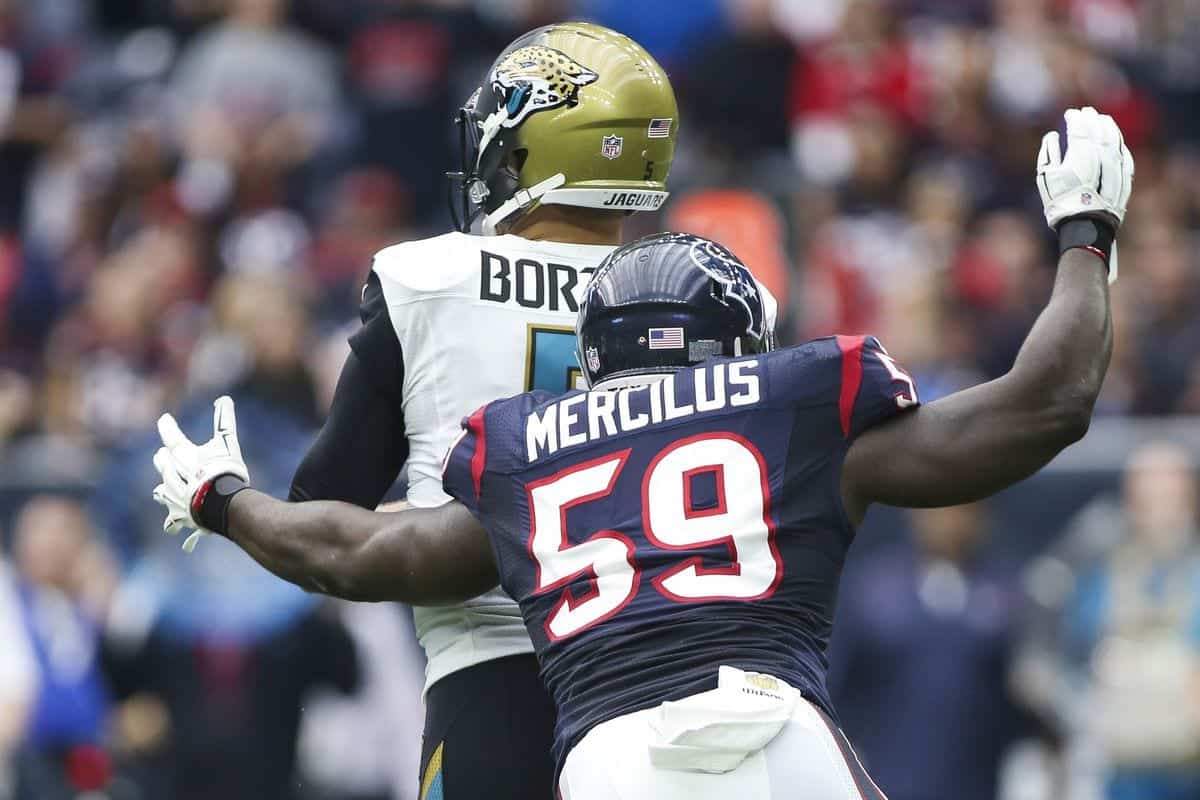 Whitney Mercilus, Houston Texans
What's in this article? Click to show
Jadeveon who?
Getting better with age
Proving his worth to the Texans

Any 2-2 start is bound to bring highs and lows. That has been exactly the case for the Houston Texans. One week the running game is carrying the offense, the next it’s completely abandoned. At times the offensive line has held its ground up front, then they abruptly look exposed soon after. On defense, the secondary has been shaky every week. There has been one constant on that side of the ball, however. That constant is Whitney Mercilus.

A roster featuring studs such as Deshaun Watson, DeAndre Hopkins, and J.J. Watt, you can make the case that none of them have been Houston’s best player thus far. Whitney Mercilus has been a one-man wrecking crew for the Texans. With one-quarter of the season in the books, he’s making an early case for Defensive Player of the Year.

As I’ve always said, Whitney Mercilus is the best pass defender on the team. pic.twitter.com/qr7hSIE0Fh

All offseason we rode through the Jadeveon Clowney saga. Finally, a week before the season he was traded in a blockbuster deal with Seattle. This naturally created concerns regarding Houston’s pass rush. There wasn’t much depth to begin with, and any defense will take a hit when they lose one of the game’s premier pass rushers. Many looked at Mercilus to ease the loss of Clowney. He’s certainly delivered and then some.

Not to say Houston’s defense hasn’t completely forgotten Jadeveon Clowney. However, the impact of Mercilus has shifted Clowney into an afterthought for this team. The Texans have had no shortage of generating pressure off the edge, and Mercilus has been the main component in that.

By season’s end, Mercilus will trail only J.J. Watt on Houston’s all-time sack leaderboard. The fifth pass rusher selected in the 2012 NFL Draft, Mercilus has been one of the steadiest and most consistent at the position since entering the league. He continues to build on his strong legacy and is now doing so as the primary edge defender for the Texans.

Getting better with age

Whitney Mercilus basically spent the entire fourth quarter dunking on Will Richardson for playing him to the outside. pic.twitter.com/9JnPddNc9P

Entering his age 29 season, a drop-off could’ve been expected from Mercilus. Especially when you consider that he racked up only five sacks combined in the previous two seasons (21 games). He’s matched that total already through four games to kick off the 2019 campaign.

Through Week 4, Mercilus ranks fifth in the league in sacks. He’s tied with Khalil Mack for most forced fumbles (4) and even has an interception to boot. Mercilus is off to the best start to the season he’s ever had and primed for a career year. At this rate, he’ll accumulate 20 sacks over the course of the season. Keeping it realistic, he’ll crush the double-digit mark and contest with his career-high of 12.

Mercilus missed 11 games in 2017 due to a torn pectoral muscle. He followed that up with a fairly disappointing 2018 campaign. Entering the season, there was uncertainty whether or not he could get back to the level of play he showcased in 2015 and 2016. Mercilus appears to be at full strength and better than ever.

He’s rushing the passer at an astoundingly high level and has looked among the best in the league thus far. Mercilus’ athleticism hasn’t degraded a tad. He looks more explosive than he has in years and has displayed his advanced toolbox week after week. He has an innate ability to win off the snap with a devastating first step. Then he’ll hit opposing linemen with a rip move or spin and often utilizes a long arm to drive his opponent back with force.  Mercilus is making a habit of the strip-sack with four already this season.

Proving his worth to the Texans

Whitney Mercilus playing with his hair on fire in a contract year. pic.twitter.com/3BKRJxNatI

Players typically find a way to turn it up a notch in a contract year. Mercilus has done just that, putting him in line for a big payday. Along with D.J. Reader, Mercilus should be the Texans highest coveted free agent this spring. Keeping the front seven intact will be the biggest priority in the re-signing phase.

The real question is, how much will Mercilus demand? Looking back to this past free agency, it’s going to cost the Texans at least $10 million per year. Justin Houston, an esteemed pass rusher entering his age 30 season was handed $12 million AAV from the Colts. This coming even with a well-documented injury history as of late.

Then there was Ziggy Ansah. Another 30 year old with a recent injury history, he was given $9 million on a one-year deal from the Seahawks. Mercilus will likely seek a number in the same ballpark as Houston and Ansah between $9-$12 million, but it wouldn’t surprise me if that number is higher.

Considering he’s playing at an all-time high level, the typical worries of paying an aging player shouldn’t be there for the Texans. With an abundance of cap space, that should make the decision even easier. Mercilus has been a vital piece in Houston’s defense since being drafted. Now as he enters the later phases of his career, he’s in line for a multi-year deal and a big payday.