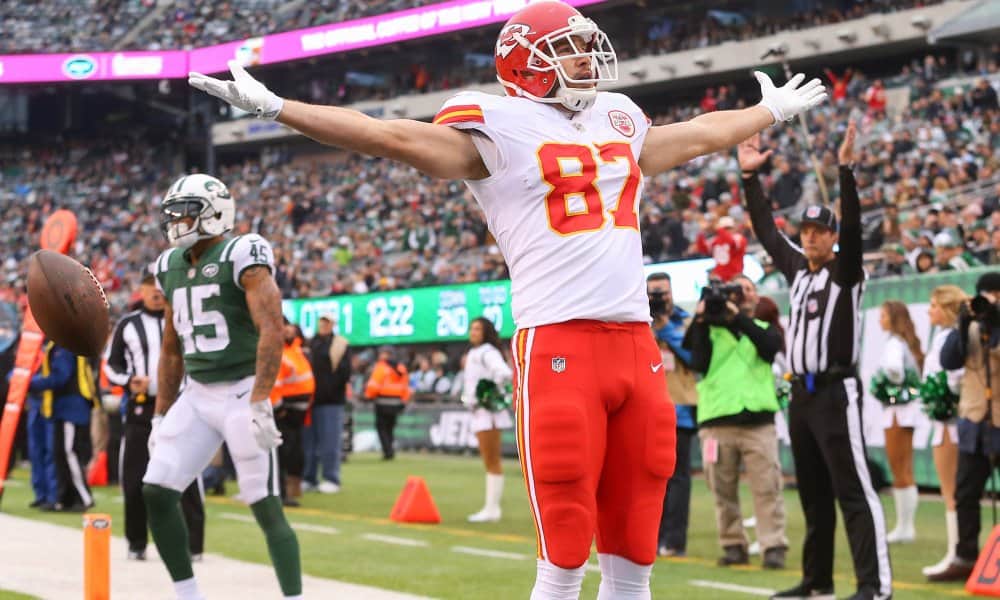 Dec 3, 2017; East Rutherford, NJ, USA; Kansas City Chiefs tight end Travis Kelce (87) celebrates after scoring a touchdown during the first half against the New York Jets at MetLife Stadium. Mandatory Credit: Ed Mulholland-USA TODAY Sports
What's in this article? Click to show
What was the overview of the tight end market entering 2020?
The 10 highest-paid tight ends entering 2020
Which tight ends could be next to join this list?

When the calendar rolled from 2019 to 2020, just one tight end earned an average salary of $10 million per year. Eight and a half months later and there were four tight ends earning over that $10m per year mark. In fact, in the 2020 season, the highest annual average value (AAV) among tight ends has risen 50% to $15m per year. Let’s take a deeper look at the shape of the tight end market in 2020. Who are the top 10 highest-paid players at the position, and which tight ends could be on this list this time next year.

What was the overview of the tight end market entering 2020?

The tight end position falls into a few tiers. With the extensions for George Kittle and Travis Kelce, they correctly reside in the top-tier, with both earning an AAV over $14m. Then we have a drop off down to the next tier with seven tight ends earning between $7.5m and $10.607m.

After the top two tiers, the salaries at the position are extremely flat. If we base the next tier as tight ends earning between $5m and $7.5m then we find a further 14 tight ends in that range. Therefore, the salary of the top 21 tight ends ranges from $5m to $15m.

Waller signed his four-year extension prior to the 2019 season, with the total value coming in just under $30 million. Waller’s cap hit will be highest in 2020 at $7.53m, before dropping into the $6.5m region over the next two seasons. The exact details are unknown, but it appears as though Waller has protection on his contract through the 2021 season. However, Waller is a player we could potentially see as a cap casualty prior to 2022.

Cook is in the second and final year of his two-year $15m deal with the New Orleans Saints. Assuming he makes the roster in 2020, Cook will count $9m against the cap this season. He will become a free agent in 2021, but due to the structure of his signing bonus, he will still be counting $2m against the Saints salary cap next season.

At 33 years old, Cook still potentially has one more mid-level contract left in him, but his performance and ability to stay on the field in 2021 will determine whether we see Cook on this list this time next year. If Cook can return to the close to 100-target player he was in 2018, then there will likely be a team willing to give him a similar contract next season.

Graham has been a consistent presence in the top 10 when it comes to tight end contracts since signing a franchise tag with the Saints in 2014. His latest contract saw him potentially commit to two seasons in Chicago, with $9m of his $16m contract guaranteed — $6m of that money in the form of a signing bonus and $3m in guaranteed base salary for 2020.

Graham could be back on the free-agent market in 2021, as the Bears can move on for just $3m in dead cap if they want to avoid having Graham costing $10m on the cap in 2021. Given the expected drop in salary cap in 2021, it is extremely likely we are looking at a new contract, and possibly a new team, for Graham in 2021.

Ertz is entering into the fourth year of his five-year extension with the Philadelphia Eagles. Ertz will earn $6.6m in base salary in 2020 while counting $12.48m against the cap. He is due to count a similar number against the cap in 2021, with $8.25m in base salary and $4.22m in pro-rated restructure payments.

However, that restructure has led Ertz to have a somewhat complicated contract situation. Currently, he has two void years built into the back end of his deal. Therefore, despite being due to become a free agent in 2021, Ertz will still have a further $3.548m in cap hit that could either be split between 2022 and 2023 or be absorbed in its entirety in 2022.

The final option for the Eagles is that they could potentially move on from Ertz prior to the 2021 season. Doing so would accelerate the cost of those void years forward onto the 2021 cap, meaning Ertz would carry a dead cap of $7.77m in 2021. However, that would still present a $4.7m saving on his current salary cap hit for 2021, space which might be invaluable given the Eagles cap concerns in 2021.

Related | Can Rob Gronkowski perform for the Buccaneers in 2020?

Gronkowski is set to be a free agent in 2021, which could be fascinating. Tom Brady is signed with the Buccaneers through the 2021 season, so if his return to football is a success, we could see Gronkowski back in a Buccaneers uniform in 2021.

Rudolph is just one year removed from signing a four-year contract extension, set to run through to 2023, potentially worth $36m with the Minnesota Vikings. More than a quarter of that contract was guaranteed ($9.25m), including a $7.25m signing bonus.

2020, the first season of the extension, will see Rudolph count $8.825m against the Vikings cap, with those numbers rising by around a $1m per year over the next three years, culminating in a potential $11.65m cap hit in 2023. However, with no guaranteed money left on the deal beyond 2020, the Vikings have the ability to cut Rudolph prior to 2021 with a dead cap charge of just $4.35m. That could save the Vikings $5.1m in cap space in 2021, as well as plenty of further cash across the life of the deal.

When he signed it this offseason, Hoopers deal with the Browns was the highest in the league in terms of fully guaranteed money. That has since been topped by the recent deal with George Kittle, but Hooper’s deal is still a massive one at the position.

After an injury-plagued start to his career, Henry will play on the franchise tag for the Los Angeles Chargers in 2021. With the Chargers uncertain of their short-term future as a franchise, 2020 will work as a prove-it year for Henry. A strong performance this season could see Henry remain at the top of this list in 2021 and beyond. However, another injury-riddled season could leave Henry facing a short-term future of small money contracts until he can prove he can stay on the field consistently.

The exact specifics of the deal are not yet known, but the expectation is the Chiefs will have done this deal with a focus on reducing either the $11.22m or $10.97m cap hits for Kelce in 2020 and 2021 respectively.

Unsurprisingly, Kittle’s new five-year, $75m extension set the benchmark for tight ends entering the 2020 season. He is already considered one of the best at the position, having ranked in the top 10 in the Pro Football Network Top 100. At just 26 entering 2020, Kittle is locked up by the 49ers through what should be the most productive period of his career.

Again, the structure is not yet known beyond the years, signing bonus ($18m), total value, and guarantees ($30m at signing and $40m for injury). However, look for this to be another deal where the bulk of the cap hit is found at the back end in order to reduce pressure on the 49ers salary cap in 2021 and 2022.

Which tight ends could be next to join this list?

As we enter the 2021 season there are five tight ends who stand out as names which could potentially join the top 10 in terms of highest-paid at the position.

The first-round pick from 2017 is still under contract for two more years after the New York Giants exercised his fifth-year option. That option will see Engram potentially earn as much as $6.013m in the 2021 season. However, if he impresses this year then we could see the Giants decide to extend him and use that fifth-year option salary as a base point for negotiation.

Unfortunately, Engram suffers from a similar problem to that which faced Hunter Henry this offseason. After playing 15 games and seeing 115 targets in his rookie year, Engram has played a total of just 19 games with a combined 132 targets in the two seasons since then. If Engram cannot put a healthy season together in 2020, then the Giants will likely be willing to let him play out his option knowing they could also use the franchise tag to buy themselves a sixth year.

Smith is set to be a free agent when the 2020 season ends, and this year is perhaps more important to him than any of the other four on this list. Despite being active in 45 of the 48 games the Titans have played since entering the league, he has just 104 total targets for 854 yards and eight touchdowns.

However, Smith is set to be the number one tight end in Tennessee in 2020 and has an opportunity to earn himself a big payday if he can build on his 44 targets last season. One potential option is that the Titans may decide to franchise Smith to see if he can demonstrate he deserves a long-term commitment. If a franchise tag is the way they go, then Smith will find himself on this list next year.

While we are waiting for Smith to break out, Andrews had his breakout year in 2019. In the first full season with Lamar Jackson under center, Andrews tallied 98 targets, 64 receptions, 852 yards, and 10 touchdowns. If Andrews can have another strong season in 2020, then the Ravens could look to hand him an extension following his third season in the league.

As it stands, Andrews is on the cusp of being considered one of the top tight ends in the league. Another good season could see him leap Hooper in terms of AAV. If he goes over the 100 target mark and keeps up a similar level of efficiency, then we could even be talking about Andrews rivaling the likes of Kittle and Kelce at the top of the tight end market.

The Eagles are in a position to potentially cut Ertz after this season, and Goedert is part of the reason why. After seeing his targets virtually double in 2019, another increase in targets could see Goedert forcing the Eagles’ hand for a payday. The only sticking point is the mess of a cap situation the Eagles have in 2021, meaning they may decide to let Goedert wait unless they work out a contract that keeps his salary low in 2021 and ramps up through the life of the deal.

Gesicki is another player who saw his targets increase in 2019. If he continues to be a big part of this offense in 2020 and finds a nice rapport with Tua Tagovailoa, the Dolphins may decide that 2021 is the time to extend him before he gets close to testing the free agent market.