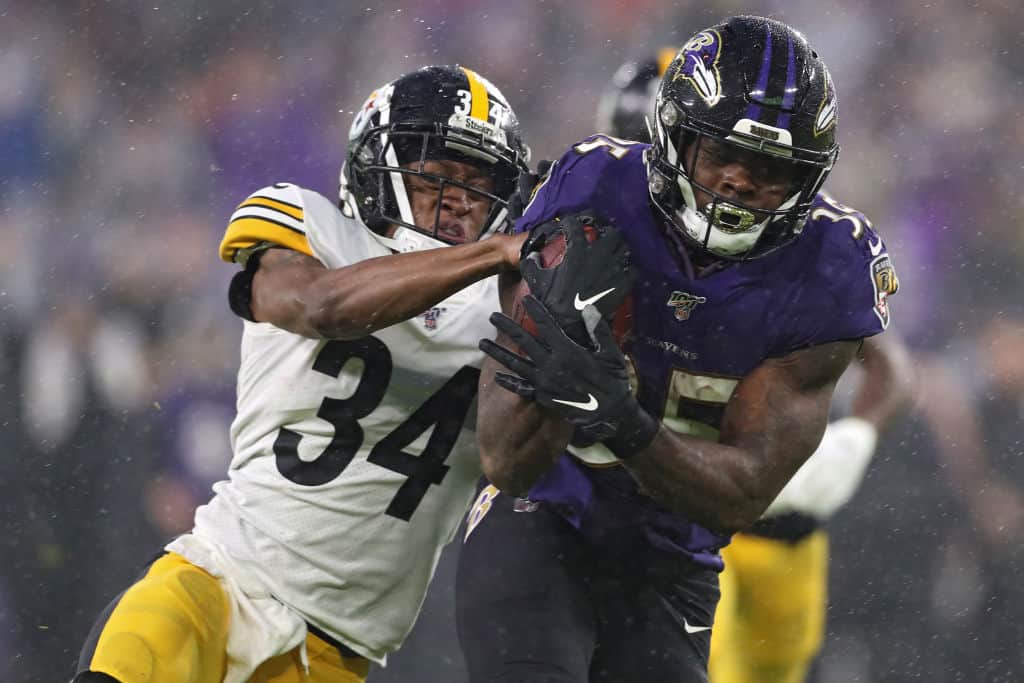 BALTIMORE, MARYLAND - DECEMBER 29: Running back Gus Edwards #35 of the Baltimore Ravens rushes past strong safety Terrell Edmunds #34 of the Pittsburgh Steelers in the first quarter at M&T Bank Stadium on December 29, 2019 in Baltimore, Maryland. (Photo by Rob Carr/Getty Images)
What's in this article? Click to show
Ravens’ RBs Mark Ingram and JK Dobbins are out; Gus Edwards and Justice Hill are in
What are the Ravens missing with Mark Ingram and JK Dobbins out of the game?
Should I start either Ravens RB – Gus Edwards or Justice Hill – on Thanksgiving Night?
Want more fantasy football analysis and news?

Already on a short week, the Baltimore Ravens will have one more challenge to overcome as Mark Ingram and JK Dobbins are out after testing positive. Now, fantasy football managers will be wondering just what kind of impact Gus Edwards and Justice Hill – the remaining Ravens RBs on the depth chart – will have on Thursday night in their Thanksgiving matchup against the undefeated Pittsburgh Steelers.

Ravens’ RBs Mark Ingram and JK Dobbins are out; Gus Edwards and Justice Hill are in

The team announced early Monday that they had started contact tracing after multiple members of the club tested positive. NFL Network’s Mike Garafolo reported that Ravens’ RB Mark Ingram and rookie JK Dobbins were two of the players who tested positive and would now be out on Thursday after being placed on the Reserve list on Monday. This means that Gus Edwards and Justice Hill will be the Ravens’ running backs on Thanksgiving Night vs. the Steelers.

Ravens’ coach John Harbaugh confirmed this and added that defensive lineman Brandon Williams would also be placed on the Reserve list after being considered a close contact. Williams must quarantine for five days and, like Mark Ingram and JK Dobbins, will be out for Thursday night.

That said, the Ravens are still scheduled to travel over to Pittsburgh for the Thanksgiving night game and AFC North matchup at 8:20 PM EST. A big reason for this is because of what the Ravens did to take the proper precautions both before and during their game on Sunday vs. the Titans.

“I think our players did a great job on the sideline with the masks,” head coach Jim Harbaugh said Monday afternoon. “Great job in the locker room. They tried to follow the protocols throughout the game and throughout the weekend at the hotel and in the meetings during the week. Our guys have done a good job of that, so I’m appreciative of them for that. That’s probably the thing that gives us a chance to play this game on Thursday night is the guys doing a great job here in the building and at the game.”

What are the Ravens missing with Mark Ingram and JK Dobbins out of the game?

It’s one thing to play your rival. It’s another thing to be doing in primetime. It becomes a whole different ballgame when that team is 10-0, this is the Thanksgiving Night game, and all eyes are on you. Having both of your top running backs out – Mark Ingram and JK Dobbins – is a brutal blow for the Ravens and their run game.

But before we see if Gus Edwards or Justice Hill can fill the void – both on the field and in fantasy lineups – let’s look at what the Ravens will be missing with Ingram and Dobbins out.

Mark Ingram has already had an up and down year both in production and health. Ingram has missed two games already due to injury, but even when he returned, he’s struggled to do much of anything this season. He has rushed 57 times for 232 yards and two touchdowns while catching five of his seven targets for 49 yards. He has only gone over the 50-yard threshold twice and double-digit fantasy points one time in 2020.

JK Dobbins – the 55th overall pick in the 2020 NFL Draft – is a different story as he is the top Ravens’ RB in PPR formats. Currently, RB36 in fantasy, he has carried the ball 72 times for 380 yards and has rushed for three touchdowns while adding 17 receptions on 22 targets for 103 yards.

After a slow start, Dobbins seemed to have taken over the lead role, especially when Ingram was out. Dobbins has double-digit carries in three of the last four games, including 15 in Week 11 for 70 yards and a touchdown where he was the RB5 heading into Monday Night Football.

This also includes a Week 8 performance in the team’s first meeting with the Pittsburgh Steelers where Dobbins had 113 yards on 15 carries for an RB19 finish. What is remarkable about this performance was as, at the time, the Steelers were second in yards allowed per attempt (3.4), third in receiving yards allowed per game (25), and third in red zone touches on the season (16). All of that after facing Saquon Barkley, Melvin Gordon, Kareem Hunt, Miles Sanders, and Derrick Henry, where the Steelers held them all to below 80 yards rushing.

What could be overlooked is that Ravens’ RB Gus Edwards was also a fantasy RB2 that week in his best game of the season. Edwards rushed 16 times for 87 yards and one touchdown on the day, good enough for 14.7 PPR fantasy points on 32% of the snaps. This number will surely go up now that both Mark Ingram and JK Dobbins are out.

Should I start either Ravens RB – Gus Edwards or Justice Hill – on Thanksgiving Night?

It’s worth noting that the Baltimore Ravens rush the ball more than any other team in the NFL (327), though 103 of those attempts (31.4%) are by Lamar Jackson. But even with that in mind, it’s hard to love either option. That said, the only Ravens’ running back I would have any confidence in on my fantasy team is Gus Edwards.

Why not Justice Hill on Thursday against the Steelers?

There is just not enough of a track record for Justice Hill for me to think he will be used in high-leverage situations. Sure, he could see 30% of the snaps, but I see those inside the 30-to-30 yard lines, not in the red zone or on crucial plays, where the weighted opportunity is much greater for fantasy success.

That’s because Hill has done nothing all year. He has been inactive for more games (4) than when he has touched the ball (1) in 2020. The second-year player out of Oklahoma State hasn’t done much in his career, totaling 298 yards on 67 combined touches and no scores. It’s hard to think the Ravens will rely on Hill to do much, but this is a backfield with a committee approach, so he will see a decent chunk of snaps, even if not much comes out of them.

Can Gus Edwards help my fantasy team as RB1?

Even with Mark Ingram and JK Dobbins out, Edwards is going to have a difficult time. The Steelers know what they want to do and the Ravens having to alter the game plan on an already short week makes things that much more difficult.

They will likely have to rely on Lamar Jackson to carry the team, which makes them one-dimensional. We’ve seen what opposing defenses can do when they’ve been able to zero in on Jackson this season. When that happens, even wide receivers like Marquise Brown, Willie Snead, and Dez Bryant won’t help much.

Pittsburgh hasn’t gotten any easier either since their last meeting. They are second in fantasy points allowed to opposing running backs (17.39 PPR), giving up the ninth-fewest rushing yards per game (83.2) and 0.5 rushing touchdowns per game. Throw in the 27 yards per game through the air they allow along with the lone receiving TD, and Edwards could be in for a long night against the new Steel Curtain.

Gus Edwards will be a lower-end RB2 for me based on volume alone. Anyone getting 15 or more touches at the running back position is hard to ignore. Justice Hill is a boom or bust RB5 with a lower floor than his ceiling and someone that I would personally stay away from in fantasy.

With claims on the waiver wire processing on Wednesday, Gus Edwards will need to be a priority addition, even if it is only to block someone else in your league from acquiring his services as the playoffs approach and spots are starting to be filled.