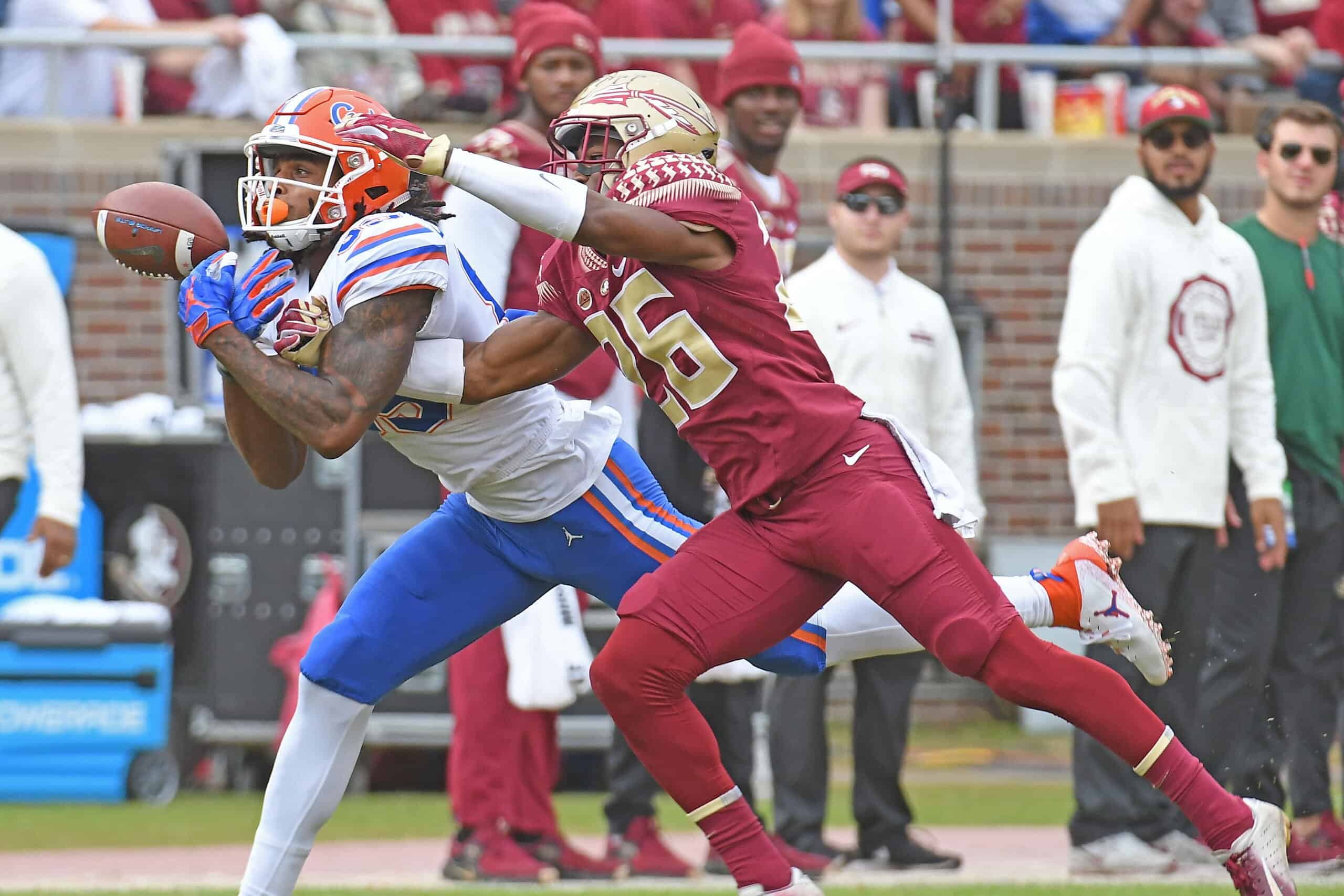 While Florida State may have been outgunned by some of the ACC’s juggernaut offenses in 2019, the Seminoles return a veteran-laden secondary, led by senior safety Hamsah Nasirildeen and junior CB Asante Samuel Jr. The former is returning from a late-season ACL injury, and the latter is poised to entrench himself as one of the premier shutdown defenders in college football. One of the more recognizable names in college football, Samuel will look to carry on a legacy and elevate his stock ahead of the pre-draft process.

Before rising to prominence as a consensus four-star recruit and ESPN’s No. 25 overall cornerback prospect, Samuel offered glimpses of dominance in the early goings.

Spearheading a notoriously fast-flowing defense for St. Thomas Aquinas High School in Fort Lauderdale, Florida, Samuel helped propel the Raiders to 7A state titles as a sophomore and junior.

While Samuel, the son of legendary NFL cornerback Asante Samuel, visited South Carolina and generated interest from several other college programs, he opted to remain in-state. He would be playing collegiately at Florida State in Tallahassee — merely a six-hour drive from his hometown of Sunrise.

Samuel managed to evade the dreaded redshirt designation often issued to newcomers, and went on to appear in 12 games as a freshman. He finished his first season by starting three of the final four games for the Seminoles, racking up 17 tackles (1.0 for loss) and a team-leading nine pass breakups — including a staggering three against the second-ranked Clemson Tigers.

Ending the 2018 season on a high note, Samuel flashed the instincts and renowned closing speed that cemented his status as a highly-coveted prospect just a year earlier.

The 5-foot-10, 184-pound ball magnet returned to Tallahassee as a starter entering his sophomore campaign.

Samuel started all 12 games for the Seminoles, notching 48 tackles (1.0 for loss), an interception, and a team-leading 14 pass breakups. He established career-highs in tackles (8.0) against Clemson and Virginia, while also collecting his first collegiate interception against the Cavaliers.

Samuel’s 14 pass breakups led the Atlantic Coast Conference and placed him eighth in college football. He earned third-team All-ACC recognition in his first full season as a starter.

With the ACC among the conferences primed to indulge in the 2020 college season, Samuel is slated to take the field in less than two weeks against Georgia Tech. The Florida native will continue building on his growing legacy and cement himself as a surefire first-round selection in the 2021 NFL Draft.

Though narrowly built, Samuel is a tremendously fluid athlete with loose hips, eye discipline, and little wasted movement in and out of breaks. His short-area quickness and innate instincts enable him to remain in the hip pocket of his receiver and run stride for stride, and his penchant for getting his hands on the football could lead to more significant plays if he can turn a couple of them into interceptions.

While many assume Samuel’s size limits him as primarily a slot defender at the next level, his father turned in a Hall of Fame-caliber career playing on the perimeter, sporting a similar build. The younger Samuel figures to intrigue evaluators with his versatility, football intellect, and awareness. He will have an opportunity against some talented pass-catchers on the schedule to silence any skepticism.