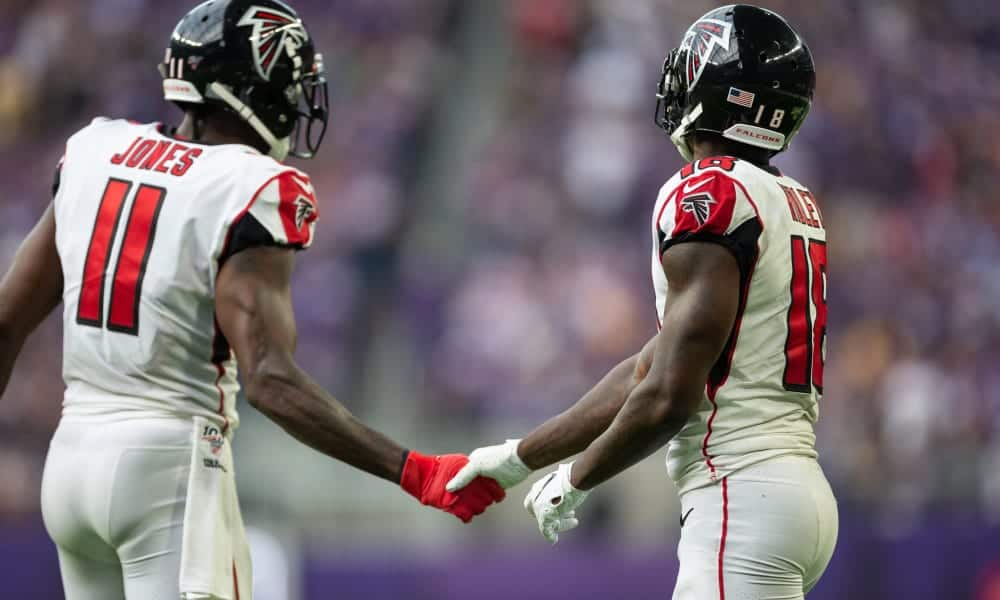 There is a saying in poker, “a chip and a chair.” All someone needs to succeed is a chance, and anything can happen. Believe it or not, the words of the 1982 WSOP champ still ring true 38 years later when looking at the NFL. Where am I going with this? Vacated targets. When going back and looking at 2019 statistics, we can start to find opportunities through vacated targets that can lead to 2020 fantasy football success.

Once the 2020 free agency season kicked off, we saw numerous players heading across the USA and will be lining up in new colors come Week 1. But what situation are they leaving behind or walking into in their new offense?

Take 2019, for example. The Oakland Raiders entered the season with 70.3% of their targets vacated from the previous season. Then they added both Antonio Brown and Tyrell Williams in the offseason to help bolster the group.

I mean, one for two isn’t bad, right?

Regardless of what happened with Brown, there was value to be found out in Oakland. Williams went on to have a 65-catch season for 652 yards and six touchdowns, and TE Darren Waller stepped up for one of the most surprising breakout performances across the entire league. By using this approach, PFN Fantasy Analyst Andrew Hall was able to call Waller as a sleeper mid-summer and took advantage of said value.

It’s all about finding the opportunity and seeing who is the most likely person to benefit. In doing so, we can find fantastic values and target players well below their ADP that can outperform their current value.

Let’s take a look at some of the most intriguing vacated target situations heading into 2020 and see what we can derive from them. 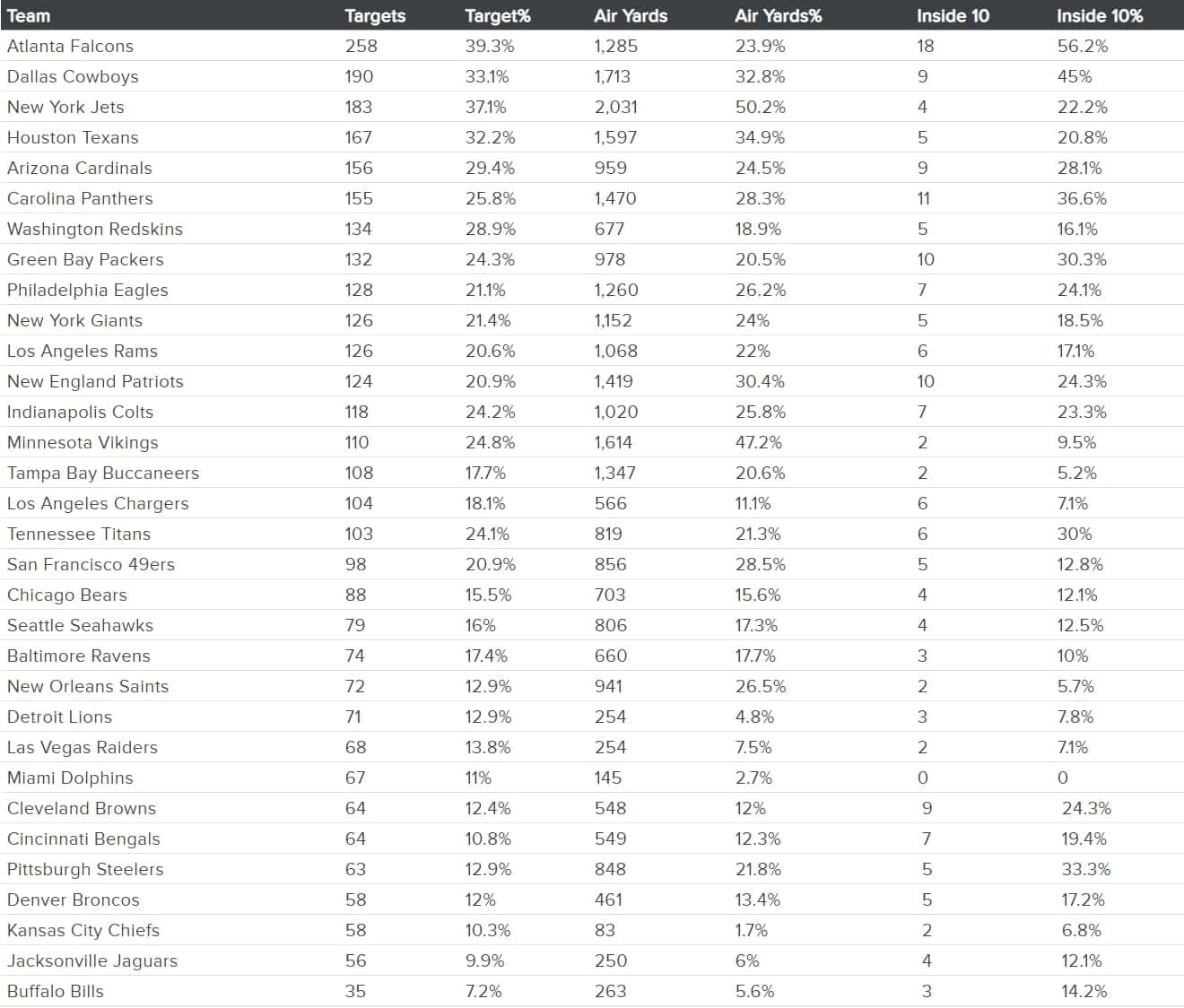 Where did the targets go?

Most people would not think of the Atlanta Falcons when thinking of missing targets heading into 2020—especially having both Julio Jones and Calvin Ridley returning to the team. However, once you dig a bit deeper, you start to see the holes that are left.

Austin Hooper is the most notable player who is off the roster this year as the tight end is now in Cleveland after signing with the Browns in free agency. Hooper’s 2019 season was the best of his career. His 787 yards ranked sixth overall, and his six touchdowns were tied for fourth. Those statistics led to Hooper making his second consecutive Pro Bowl. Importantly for our purposes, Hooper was sixth in the NFL amongst tight ends with 97 targets on the season.

Along with Hooper’s absence is wide receiver Mohamed Sanu and running back Devonta Freeman. Freeman, who remains unsigned, had 70 targets last season. Sanu, however, was part of a late-October trade that sent the veteran wide receiver and his 43 targets to the New England Patriots in exchange for a 2020 second-round pick.

Who can benefit from the vacated targets in 2020?

I think we have to start with one of the best wide receivers in the NFL and fantasy football in Julio Jones. It’s scary to think he can be even better, but the numbers check out. In 2019, Jones accounted for 157 targets, 25.7% of the team’s total. Even though the targets might only see a slight increase, we could see a sizable uptick in red zone targets. More importantly, inside the 10-yard line.

Jones has never had an issue gaining yards; over the last six years, he averages 1,564 yards and while never finishing worse than WR7 in PPR scoring. Fantasy owners have always wished Julio would score more touchdowns, and this year I believe he does.

Atlanta comes into 2020 with 56.2% of their targets inside the 10-yard line vacated, primarily due to Hooper’s loss. Given Julio’s skill set, even 25% of those targets should and will lead to multiple scores over the season’s course.

Don’t be surprised if Julio Jones is the WR1 by season’s end.

Calvin Ridley and Hayden Hurst are the players who I believe take the most sizable jump in 2020 for the Atlanta Falcons. Ridley has shown the ability to run almost any route and be a leading threat if Jones were to miss anytime. Currently, I see Ridley hovering around the 20% target share for 2020 and seeing around 125 targets by season’s end. There is a reason industry experts expect him to take the next leap into stardom this upcoming season.

As for Hurst, he slides into a prominent role in the Dirk Koetter offense that loves to focus on the tight end. While overshadowed by Mark Andrews with the Baltimore Ravens, Hurst has shown glimpses of his abilities when given snaps. The Falcons believe in this statement after using a second-round pick to acquire him. Currently being selected as TE16 in startup drafts (129.8 ADP), Hurst is one of the safest selections you can make at the position that will outperform his current investment cost. I believe Hurst will be a low-end TE1 when 2020 wraps up.

Just as the urban philosopher Marshall Mathers once eloquently asked, “If you had one shot or one opportunity to seize everything you ever wanted in one moment. Would you capture it or just let it slip?” This season might be Hurst’s one shot to prove he can be a lead-tight end for an NFL team.

A sneaky play you can grab later on in drafts is third-year WR Russell Gage. Gage came out of the draft as one of the silent winners after Atlanta didn’t bring in any competition and should serve as the WR3 in the offense that was number one in passing attempts in 2019.

Gage can be selected in some of the last rounds of your draft due to his current 213.6 ADP. I would advise taking him a few rounds sooner than this as people are likely to catch on sooner rather than later to the potential value.

Don’t forget about Todd Gurley too. His knees may be shot, but he has big enough shoulders to take on the majority of the 70 targets that Freeman saw last year. In reality, it makes too much sense. Receptions will likely lead to reduced contact on his body and allow the team to get productive targets late into the season. He will maintain a high-end RB2 upside every week.