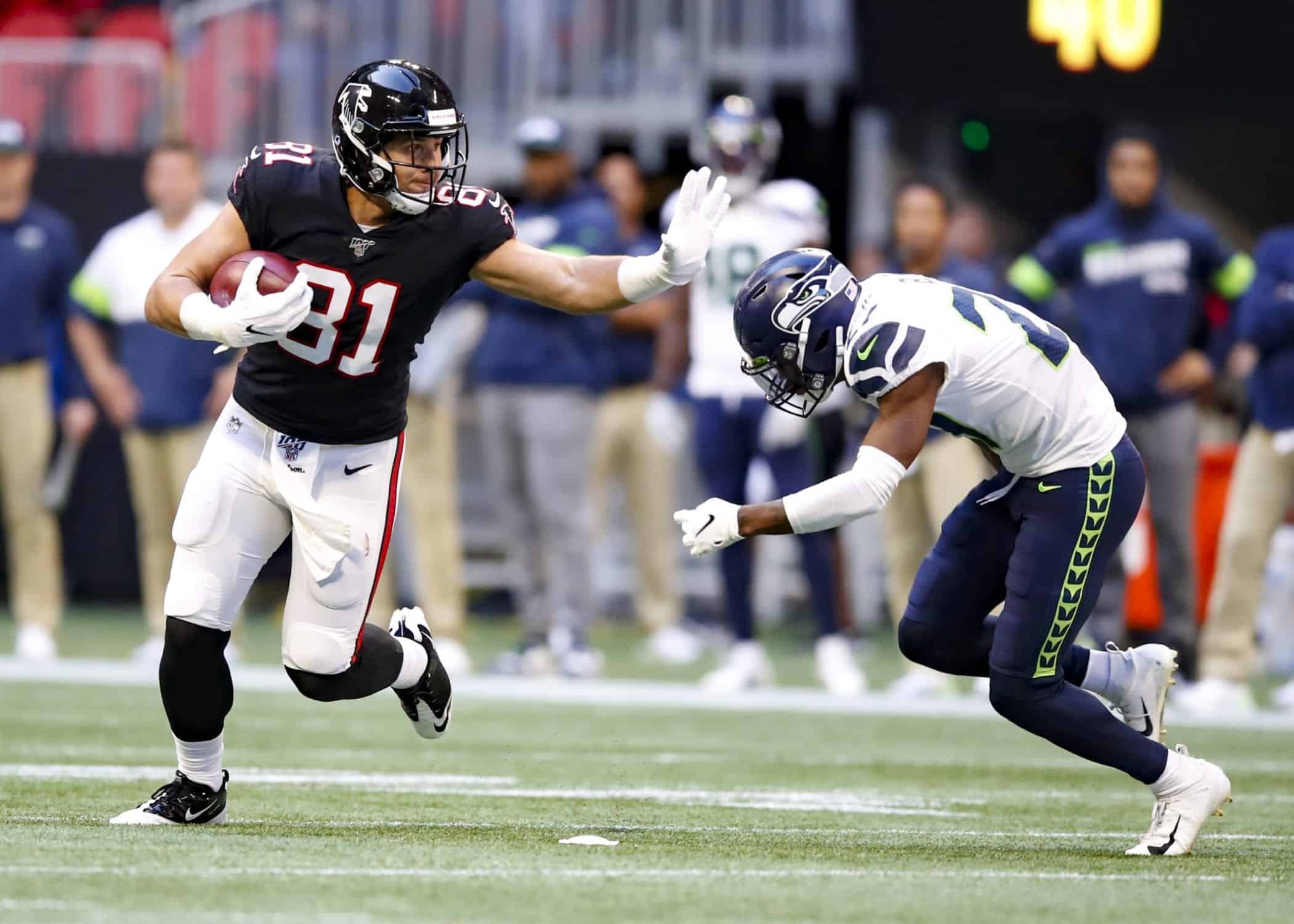 Photo by Todd Kirkland/Getty Images)
What's in this article? Click to show
Using Hooper’s statistics to show why he is the best free agent at his position
Examining why Hooper’s OSM grade was so high
Other reasons to consider Hooper as the best free-agent tight end

Free agency is here in the NFL, and everyone is talking about where the stars will end up. However, one free agent that isn’t receiving much attention is Austin Hooper. According to PFN’s Tony Pauline, Hooper will probably be too expensive for the Falcons to keep, giving him the opportunity to test the free-agent market. However, he isn’t drawing as much media attention as some of his peers. When ranking the tight ends slated to enter free agency, most publications that I have seen rank Hooper below Hunter Henry, and some have him below Eric Ebron as well. Henry and Ebron are both excellent players, and all three tight ends are all under 27, in what should be the prime of their careers. All of them should warrant serious consideration from teams looking for a tight end in free agency. However, when comparing their performances last season, Hooper is clearly the best option out of the three.

Hooper’s traditional statistics in 2019, the final season of his rookie contract with the Atalanta Falcons, were the best of his career. Compared to other tight ends last season, his 787 yards ranked sixth overall, and his six touchdowns were tied for fourth. Those statistics led to Hooper making his second consecutive Pro Bowl. Henry’s statistics were almost comparable, with 652 yards and five touchdowns, and they both outperformed Ebron, who had 375 yards and three touchdowns, by a significant margin. So, based solely on those statistics, it appears that Hooper should be ranked higher than either of his competitors.

However, supporters of Henry and Ebron will be quick to point out that both tight ends missed significant playing time in 2019 due to injury, so their statistics don’t necessarily reflect how well they performed last season. Of course, the same is true of Hooper, which makes comparing the three players directly nearly impossible. Fortunately, PFN’s Offensive Share Metric (OSM) was created for precisely that purpose. It calculates how responsible a player was for the statistics they produced, regardless of how many opportunities they received.

Using this metric, we can see that Hooper once again outperformed his free-agent counterparts by a large margin. His grade of 40.14 was the fifth-highest received by a tight end last season, and the highest grade received by any free agent available this offseason. Put another way, out of every offensive player currently on the free-agent market, Hooper did the most with the opportunities he was given. In comparison, Henry and Ebron received grades of 34.76 and 33.72, respectively. Those aren’t terrible grades, ranking 18th and 23rd among qualifying tight ends, but they still pale in comparison to what Hooper accomplished. Not only did he perform better statistically, but he also had more influence over those statistics either Henry or Ebron.

Examining why Hooper’s OSM grade was so high

Explaining why Hooper’s grade was so much higher than Henry or Ebron’s isn’t difficult. He outperformed them in virtually every category used in calculating the OSM. For example, one notable factor involved the calculation is the amount of separation a player had between themselves and their defender at the time of a catch or incompletion. Hooper averaged a more than respectable 3.5 yards of separation across his 97 targets. Ebron nearly matched that average, at an average of 3.2 yards, but Henry was almost a yard behind, at 2.6. On the surface, that might not seem like a significant difference. However, that extra yard of separation can make a quarterback’s job infinitely more manageable, especially when trying to find a receiver while a 300-lbs defensive lineman is bearing down on them.

A similar pattern emerges when you look at the catch percentages of the three tight ends, another important factor in calculating the OSM. Once again, Hooper led the way with an absurdly high 77.32%, the fifth-highest among qualifying tight ends. Henry wasn’t far behind, catching 72.37% of the passes thrown his way, but Ebron wasn’t even close at 59.62%. This fact should be fairly obvious, but for a receiving tight end, almost nothing is more important than consistently catching the ball. Aside from the obvious benefit of moving the ball further downfield, it also builds trust between a quarterback and his tight end, providing a vital safety blanket in challenging circumstances. Hooper’s reliability makes him a pressured quarterback’s best friend.

There are a few other factors that work in Hooper’s favor. To start with, it is impossible to talk about Henry without mentioning his injury history. Over the first four seasons of his career, Henry was unable to play in 24 games, including a playoff game in the 2018 season. That amounts to missing more than a third of the games in which he could have played. And unfortunately, if you can’t play, then it doesn’t matter how talented you are. Any team that signs Henry will be accepting the genuine possibility that he will be sitting on the sidelines for a significant portion of his time with them.

Ebron’s career has been similarly inconsistent, although in his case, injuries have generally not been the defining factor. His 2018 season was arguably the best produced by any of the three players, but he was not able to match that level of play in any other year (the fact that 2018 was the only year in which Ebron’s quarterback was Andrew Luck might have had something to do with that). In contrast, Hooper’s statistics have improved from season to season, culminating in 2019 in which he outperformed his most noteworthy counterparts by a significant margin.

Despite those concerns, I think solid cases can be made in favor of signing all three of these tight ends. As I already mentioned, they are all relatively young, and each of them has been successful at various points in their careers. That said, Hooper has been more consistent than Henry and Ebron over the course of his career, and in 2019 he outperformed them both in just about every conceivable way.