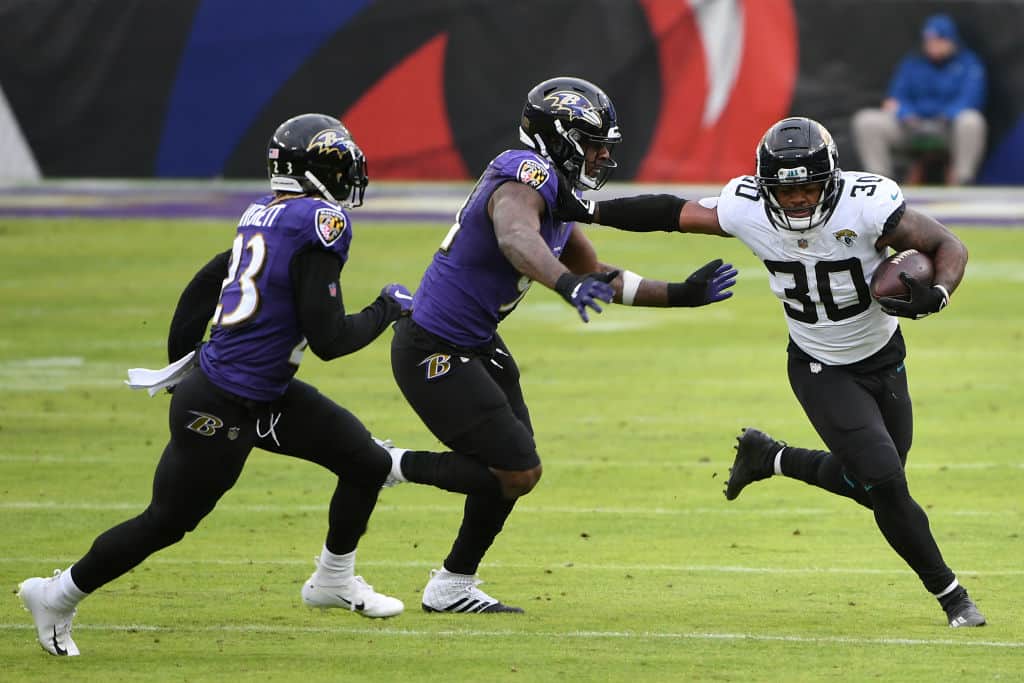 If you haven’t already had your fantasy football championship yet, it is likely now in Week 17. That means we now need to follow our Week 17 fantasy RB injury update closely. The statuses of key players like Cam Akers and James Robinson are up in the air and could determine your team’s future — let’s dive into the RB injuries to consider for Week 17.

James Robinson didn’t play in last week’s game, but now that the Jacksonville Jaguars have the No. 1 overall pick, and therefore Trevor Lawrence, secured, don’t be surprised if he returns.

What is James Robinson’s status for Week 17?

Last week, Head Coach Doug Marrone announced that he would allow James Robinson to sit out of practice. Marrone made that move in the hopes it would help Robinson recover in time for Jacksonville’s matchup with the Bears. Unfortunately, Marrone’s plan didn’t work, and Robinson was not ready in time for the Week 16 tilt.

That forced the Jaguars to turn to back-up running back Dare Ogunbowale, who played adequately. However, he didn’t make up for the absence of James Robinson, one of Jacksonville’s lone bright spots. Ogunbowale averaged over five yards per carry on the ground and gained 71 yards. Through the air, he added another seven yards on three receptions.

If the Jaguars had beaten Chicago on Sunday, it might’ve been best for them to sit Robinson for Week 17. He’s one of their best offensive players and could help Jacksonville win a game. If they had beaten the Bears, the first overall selection in this year’s draft would be undecided. That would make them want to lose next week and potentially bench some players, like James Robinson.

However, they locked up that first overall selection this week. That means they can try to win next week’s game if they want, making Robinson’s return more likely. With that said, they could still opt to rest their RB of the future, to preserve him for 2021.

Will the Rams have Cam Akers or Darrell Henderson back in Week 17?

The Los Angeles Rams are not entering the playoffs with the type of trajectory one would hope. They’re coming off back-to-back losses to the Seahawks and Jets and are now down their top two RBs. Both Cam Akers and Darrell Henderson are now on the fantasy RB injury update for Week 17.

Akers was hurt last week against New York when he sustained a high-ankle sprain. During the week, Rams head coach Sean McVay stated that the injury would force Akers to miss the upcoming game.

That meant Los Angeles had to lean on Darrell Henderson and Malcolm Brown, which did not go well.

Henderson joined Cam Akers on the sidelines partway through the game with an ankle injury of his own. The injury came after Henderson sprung one of his runs free when Jamal Adams made a touchdown-saving tackle.

As of now, we don’t know how long the Rams are expecting Henderson and Akers to remain out for. Once we see the practice reports from this week, we’ll have a better idea.

If Cam Akers and Henderson do miss this week’s game, Malcolm Brown would be an excellent waiver target. The Rams are one of the most run-heavy teams, and Brown will be their only healthy RB with experience.

Will Ronald Jones be active in Week 17?

The Tampa Bay Buccaneers were without Pro Bowl-snub Ronald Jones on Saturday against the Detroit Lions. Jones was placed on the list before the Bucs’ Week 15 game but did not come off it this week. As a result, he was unable to play in Week 16 against the Lions.

Along with being on the reserve list, Jones is also battling a finger injury. Considering Jones is on the reserve list, it’s much harder to forecast when he’ll be able to return. With that said, most players have returned after approximately two weeks, so Jones could play this week if he follows that trajectory.

If Jones remains on the fantasy RB injury update for Week 17, watch for Ke’Shawn Vaughn and Leonard Fournette to split carries. Vaughn took over the ‘lead back’ role last week with 62.5 percent of the carries, though Fournette got plenty of work as well.

In Week 15 against the Miami Dolphins, the New England Patriots were without top back, Damien Harris.

He missed the Week 15 matchup with an ankle injury and could miss New England’s matchup this week too. He is currently listed as “questionable” on the Patriots’ injury report. The fact he practiced every day this week is a positive sign, but that was the case last week too, and he was still ruled inactive for the game.

One of the players New England could utilize to replace some of Harris’ production, J.J. Taylor, is also “questionable.” If the Patriots are down both Taylor and Harris for Monday Night’s game, their odds of winning will be much slimmer.

Last week against the New Orleans Saints, Clyde Edwards-Helaire sustained an ankle injury that sidelined him. Early into this past week, he was designated “out” for the Chief’s Week 16 game.

Edwards-Helaire’s x-rays came back negative, but he didn’t participate at all in practice last week, so he might not return. That is especially true considering that the Chiefs locked up the AFC’s top seed with a win today. It would be odd to rush him Edwards-Helaire back with nothing on the line.

We will have a better idea of Helaire’s status for Week 17 after the Chiefs release this week’s practice reports.

Although the Panthers’ season has been over for a long time, Christian McCaffrey is still trying to make his return. McCaffrey tweaked his quadriceps after coming off of injured reserve ahead of Carolina’s matchup with Denver.

He missed that game back in Week 14, and now the two that followed. Adam Schefter initially reported, back in Week 15, that McCaffrey would return this year. However, at this point in the season, it seems returning could only further injure McCaffrey with there being no obvious gain.

Whether or not he participates in practice this week will tell us what to expect come Sunday. If McCaffrey doesn’t return, Mike Davis will continue to hold down the fort.