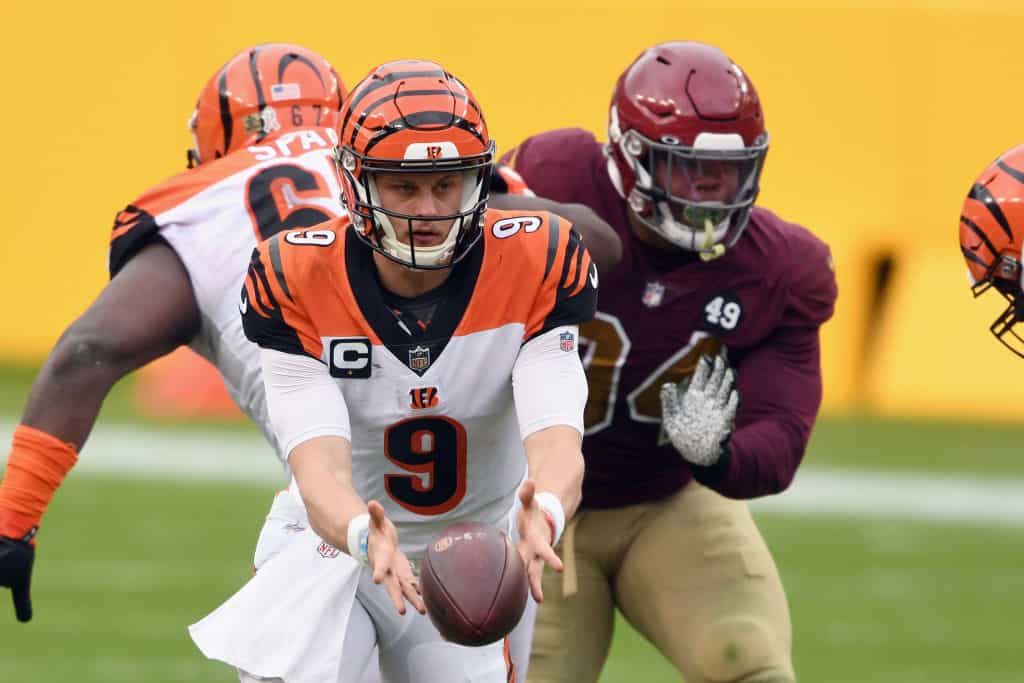 LANDOVER, MARYLAND - NOVEMBER 22: Joe Burrow #9 of the Cincinnati Bengals pitches the ball back against the Washington Football Team during the first half at FedExField on November 22, 2020 in Landover, Maryland. (Photo by Mitchell Layton/Getty Images)
What's in this article? Click to show
NFL Fantasy Injury Report and Updates Week 12: Is Teddy Bridgewater playing in Week 12?
Week 12 Updates: Is Joe Burrow playing again this season?
Week 12 Injury Updates: Which fantasy WRs are we watching this week?

Week 11 featured a terrific slate of games, but it feels like Week 12’s games are already upon us with a Thanksgiving Day triple-header right around the corner. That means fantasy football GMs will need to stay on top of fantasy injury reports and updates for Week 12, being extra diligent in order to optimize their waiver wire claims. This week, the waiver wire will be especially important considering the impact the players that were injured have on their respective teams. As the quarterback, Joe Burrow affects the fantasy output of every player on the Bengals offense. Meanwhile, JuJu Smith-Schuster’s injury will certainly shift the Steelers’ offensive gameplan while opening up opportunities for Chase Claypool, Diontae Johnson, and James Washington.

The fantasy Week 12 injury report will leave fantasy GMs scratching their heads when trying to set their lineups this weekend. Will they play, or do we have to scramble to try and find a few last-minute replacements?

Teddy Bridgewater nearly ended up playing in Week 11, and while that ended up not being the case, it would be surprising at this point if he didn’t return to the starting lineup for their road matchup with the Minnesota Vikings.

Adam Schefter of ESPN initially reported that Teddy Bridgewater would be active. That news came as a surprise but was undone just 10 minutes later when Schefter reported that Bridgewater would be inactive and P.J. Walker would start for the Panthers. He explained the miscommunication in a later tweet, saying that after initially deciding to activate Bridgewater, the Panthers changed course and opted to play it safe.

“He looked really good, everyone agreed he could play, but in my gut, I didn’t feel like it was the right thing to do,” Rhule said. “I made that decision. Teddy wanted to play, like the true competitor he is. But like the true team player he is, he respected my decision.”

In the end, the decision was a terrific one by Rhule. He kept his quarterback safe and gave him an extra week of rest when he wasn’t at 100 percent, and he was rewarded as Walker led his team to an easy 20-0 victory.

With that said, considering how close Bridgewater was to playing today, it would be very surprising if he wasn’t ready to go next week against the Vikings, even though he will be on the fantasy injury report for Week 12.

Early in the third quarter of the Cincinnati Bengals’ 20-9 loss at the hands of the Washington Football Team, Joe Burrow was hit low during a throw and injured his left knee on the play as a result. The injury looked scary, which led to both teams coming out and surrounding Burrow and the trainers, as the cart had to be called out to take Burrow back to the locker room.

Backup quarterback Ryan Finley came in to finish the game for Burrow and struggled to move the offense, completing just 30 percent of his passes for three yards per attempt.

The early feeling around Joe Burrow would be on the injury report for Week 12 as well as the rest of the season, which was fueled in part by a tweet the rookie quarterback sent out.

“Thanks for all the love,” he tweeted. “Can’t get rid of me that easy. See ya next year.”

“Bengals QB Joe Burrow suffered a torn ACL based on the initial diagnosis,” Rapoport wrote. “There may be additional damage. Burrow signaled it with his tweet, but the MRI confirming the injury would end his stellar rookie season.”

It’s hard to imagine the Bengals’ offense staying above water now that Joe Mixon is on injured reserve and Joe Burrow is done for what’s left of the year.

Week 12 Injury Updates: Which fantasy WRs are we watching this week?

Update for Tuesday, November 24: JuJu Smith-Schuster was a limited participant in practice on Tuesday, according to the Steelers’ injury report, which leaves his status for the Thanksgiving Day game in question.

JuJu Smith-Schuster suffered what is likely the weirdest injury of Sunday’s action in the Pittsburgh Steelers’ matchup with the Jacksonville Jaguars. While walking towards the sidelines, Smith-Schuster accidentally stepped on one of the referee’s penalty flags and appeared to twist his ankle in the process, as he limped the rest of the way off the field.

JuJu Smith-Schuster left the game at that point and would not return for the Steelers, landing him on the injury report for Week 12.

After the game, Mike Tomlin said that the injury was minor, but that it could still certainly pose a problem to the team as they will have to play the Ravens next week on Thanksgiving, which gives the talented receiver much less time to rest up.

If Smith-Schuster is held out of the Thursday night game with the Ravens, watch for Chase Claypool, Diontae Johnson, and James Washington to receive an increased snap count.

Update for Tuesday, November 24: According to Harry Scull Jr. of Buffalo News, John Brown did not practice during the portion of practice open to the media.

John Brown has been hindered by leg injuries throughout 2020, and unfortunately, that trend might continue into Week 12. In Buffalo’s Week 10 matchup with Arizona, Brown came up favoring his ankle. He was able to walk off on his own power to the sideline, but the fact that his ankle is already banged up again should be a major concern.

If Brown is out this coming weekend against the Los Angeles Chargers, keep an eye out for impressive rookie Gabe Davis to take over his snaps.

Update for Tuesday, November 24: According to the Houston Texans’ injury report, Cobb did not practice on Monday or Tuesday while Still was a limited participant for both sessions, putting Stills’ status in doubt for Thanksgiving, while Cobb will almost certainly be out.

Houston Texans wide receivers Randall Cobb and Kenny Stills will both be on the fantasy injury report for Week 12.

That puts the Texans in a very difficult position because, much like JuJu Smith-Schuster, Cobb and Stills will only have until Thursday to heal up, as Houston is playing on Thanksgiving as well.

Mark Berman of Houston’s Fox 26 reported that Cobb has injured his toe and that he is not expected to be ready for the big Thanksgiving game. However, Stills’ quad injury is minor enough that he could potentially play on Thursday.