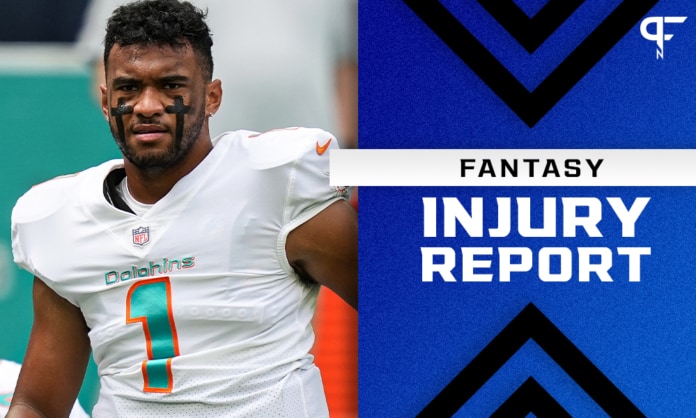 With the 2021 NFL season reaching full gear, here are some updated injury reports to keep in mind for your Week 3 fantasy football lineups.

The unfortunate reality of the return of the NFL is when players are allowed to go full speed — injuries are bound to happen. Now that fantasy football managers are updating their lineups for the coming week, several players have found themselves on the injury report, leaving their status for Week 3 in the air.

Update 09/26/21: Make sure to check out our most up-to-date fantasy football injury report for Week 3.

Tua Tagovailoa left Sunday’s game in the first quarter with a rib injury, getting carted into the locker room after taking a shot from Bills defensive end A.J. Epenesa on a failed fourth-down conversion. According to NFL Network’s Tom Pelissero, Tua suffered bruised ribs. X-rays were negative, but Pelissero reported he is in a lot of pain and will receive an MRI on Monday [September 20]. On Monday, Coach Brian Flores described Tua as “day-to-day.” Pelissero added that it will be about “pain tolerance and functionality moving forward.”

Update: On September 22, Flores revealed that Tua has fractured ribs and will miss at least Week 3.

Tyrod Taylor left Sunday’s 31-21 loss to the Cleveland Browns with a hamstring injury and was replaced by rookie quarterback Davis Mills to start the second half. According to Pelissero, Taylor will be out “for a while” as they await the swelling to go down to get a better view of the strain. He notes an IR stint could be possible. Mills will be the starting QB for Thursday Night Football against the Carolina Panthers.

According to Rapoport, Carson Wentz is dealing with injuries to both ankles. Wentz was scheduled to undergo tests on Monday, but there has been no word of the results. Jacob Eason would be the starting QB for Week 3 should Wentz miss time.

Adam Hill of the Las Vegas Review-Journal reports Derek Carr underwent an MRI on his ankle Monday and is uncertain for Week 3’s matchup against the Miami Dolphins. Head coach Jon Gruden stated, “I think he’s going to be able to play.” The Raiders did add QB Kyle Sloter to their practice squad.

Let’s see how the injury bug is affecting RB committees heading into Week 3.

Gruden said Monday that Josh Jacobs (toe/ankle) is day-to-day and “very questionable” to face the Dolphins in Week 3, per Hill of the Las Vegas Review-Journal. Jacobs missed Week 2 due to the injuries.

According to Lindsey Thiry of ESPN, Rams head coach Sean McVay says Darrell Henderson has a rib cartilage injury that he sustained in Sunday’s game against the Indianapolis Colts. McVay added, “they have hope and optimism with him and will be checking in again Friday.” With the Rams already down three running backs, Sony Michel would be the lead back in a difficult matchup against the Buccaneers.

Halfway through the fourth quarter, Dalvin Cook received a handoff and was tackled from behind. He stayed down on the field for a short time and walked off gingerly while being escorted by trainers. Head coach Mike Zimmer said it was an “ankle sprain,” but there has been no further news regarding the severity of his status.

Dubow also reports that Trey Sermon is in the NFL’s concussion protocol after suffering a helmet-to-helmet hit on the first carry of his career.

Nick Wagoner of ESPN reports JaMycal Hasty suffered a high ankle sprain, which Shanahan says will keep him “out for a while.” Meanwhile, the 49ers are bringing in T.J. Yeldon, Duke Johnson, and Lamar Miller for workouts due to their injuries in the backfield.

The last thing the Browns needed was another WR to go down with Odell Beckham Jr. yet to return. And it’s not just any WR — it’s Jarvis Landry. According to Kimberly A. Martin of ESPN, Landry is “week-to-week” with an MCL sprain.

Cabot of The Cleveland Plain Dealer reports Beckham (ACL) could make his 2021 season debut in Week 3.

With the game out of reach and the Steelers down two possessions, an injury to Diontae Johnson as time expired was the definition of adding insult to injury. After a second straight game of double-digit targets, Johnson suffered a lower-body injury on the game’s final play. As teams were shaking hands after it was over, trainers helped Johnson off the field. Mike Garafolo of NFL Network reported that Johnson did not suffer a serious injury. His status for Week 3 against the Bengals is unknown.

Michael Gehlken of The Dallas Morning News reports Amari Cooper sustained a bruised rib during Sunday’s 20-17 win over the Chargers. His status for Week 3 is unknown as of now, but it does not appear to be serious.

After recording a catch on Sunday, Danny Amendola suffered a hamstring injury and did not return to the game. He was listed as a non-participant in Monday’s practice.

Coach David Culley said Monday that Nico Collins (shoulder) is dealing with a “pretty significant” injury, Aaron Reiss of The Athletic reports. Culley declined to rule Collins out for Week 3.

Head coach Urban Meyer said Monday that Laviska Shenault Jr. (shoulder) “should” be available Week 3 versus the Cardinals, according to John Shipley of SI.com.

James O’Shaughnessy suffered an ankle injury in the first half after playing 3 offensive snaps Sunday. Despite recording just 1 catch for 24 yards, he ended the game as Jacksonville’s second-leading receiver.

Paul Schwartz of the New York Post reported that Engram (calf) participated in drills Monday. Evan Engram has not appeared in a game this season.

The Eagles placed Zach Ertz on the reserve/COVID-19 list Monday.