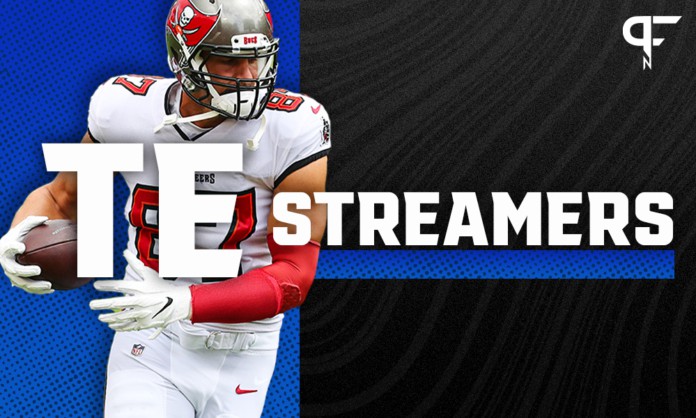 With two weeks of the 2021 NFL season in the books, here are the Week 3 fantasy football TE tiers and streamers.

While individual rankings will always be valuable for weekly decisions, using a tier-based approach at TE can help find similar production ranges.

Rather than focusing on the top-tier fantasy football players, we are looking at the tight ends who might be going under the radar for Week 3. For this, we are using FleaFlicker and their availability percentage with a cut-off at 60%, meaning many of these TEs should be available in your fantasy football league.

Before we go into potential tight end streamers for fantasy football in Week 3, let’s be honest with ourselves — outside the top 10, finding production at TE is about as brutal as it gets. It is a low-volume position, and most TEs will likely struggle for weekly relevance if they don’t score a touchdown.

Also, keep an eye on Evan Engram in your fantasy leagues. While he is not below the 60% threshold on FleaFlicker, odds are managers have grown frustrated and possibly dropped him as he has not yet played in 2021. However, he was practicing on Monday, and there is a chance we see him make his debut in Week 3. Given his athleticism, it is worth looking to see if he is available on your waivers.

This is just as much about Austin Hooper’s usage as it is Cleveland’s current pass catcher depth chart. While we might see Odell Beckham Jr. make his return from his ACL recovery in Week 3, the Browns are without Jarvis Landry (MCL sprain) for several weeks. We likely see Hooper take on a more prominent role in the passing game.

After a 3-target, 27-yard game in Week 1, Hooper saw an uptick in Week 2, recording catches on all 5 targets (team-high) for 40 yards. Believe it or not, that was enough to finish as the TE14, which says a lot about the lack of options at the position. The Bears are No. 8 vs. TEs in fantasy points allowed at 7.1 per game, but it is worth taking a shot on Hooper as a TE streamer in Week 3 for fantasy football.

The Steelers are enamored with their second-round rookie. Freiermuth is viewed by many as Heath Miller 2.0, and he has steadily seen his workload increase. After a single catch for 24 yards in Week 1, Freiermuth bested fellow Steelers TE Eric Ebron with 4 receptions (4 targets) for 36 yards in Week 2. He also out-snapped Ebron 33 to 24 on Sunday. With Diontae Johnson nursing an injury, we could see Ben Roethlisberger look to Freiermuth more often, allowing the rookie to top his 10.8% target share in Week 2.

Pittsburgh takes on the Bengals in Week 3, and getting in early on Freiermuth might be the smart move for fantasy managers.

The Cardinals never use their tight ends, right? Not so fast, my friend. Maxx Williams was an integral part of Arizona’s dominance in Week 2, catching all 7 of his targets for 94 yards against the Vikings. Even without finding the end zone, Williams finished as the TE4 in PPR with 16.4 fantasy points.

While I am not saying he will see 7 targets in Week 3, Williams has as good a shot as anyone on Arizona’s roster to succeed against the Jaguars, who are 24th in points allowed to TEs at 16.05 per game.

If they wear a Panthers jersey, start them in Week 3. Carolina takes on Houston on Thursday Night Football Week 3, and the matchup could prove beneficial to Dan Arnold.

Arnold had a decent showing against the Saints on Sunday, securing 3 receptions for 55 yards. He’ll never be the focal point of Carolina’s offense, but he could find the end zone this week.