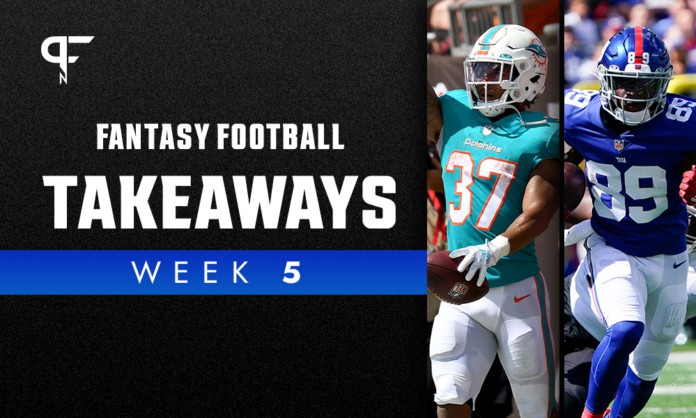 What performances and situations should we take note of from the 1 PM ET set of games?

With a decimated receiving corps surrounding him in London, Kyle Pitts showed why he was viewed as a generational tight end talent in the 2021 NFL Draft. But when Calvin Ridley and Russell Gage return — and when the Falcons are no longer facing the Jets — we should temper expectations about a rookie who entered yesterday as the TE19.

Speaking of New York’s troubled franchise, Michael Carter managers have a Ty Johnson problem. The only way a Jets RB will be reliable in fantasy is if one emerges as the bellcow. And there’s no sign of that happening.

Joe Burrow was sent to the hospital after this game with a potential throat contusion. A Cincinnati offense led by backup QB Brandon Allen could be disastrous for fantasy managers. Meanwhile, coming off a 97-yard game last week, AJ Dillon outperformed Aaron Jones in fantasy. Make no mistake — the recently re-signed Jones is still the lead back. But the talented Dillon looms.

Alexander Mattison dominated for the second time in two starts, though his late fumble almost cost his team the win. Mattison, Dillon, and Tony Pollard were my top three RB handcuffs this summer, and all three are on my fantasy team. Week 5 showed why handcuffs like Mattison are worth far more than their ADPs suggest. And my column yesterday morning explained why savvy managers should sit the seemingly unsittable Jamaal Williams, whose explosive start to the season was both unexpected and unsustainable.

I traded for Antonio Brown Friday in preparation for this game. His preseason ADP was lower than that of Mike Evans and Chris Godwin, though it remains unclear why. My warnings about Myles Gaskin were clearly premature, as he posted 15 touches for 99 yards and 2 scores. I cannot conceive of what Miami will do next week, but it’s hard to imagine Gaskin turning into even a semi-regular offensive juggernaut.

What shin injury? Antonio Gibson manufactured another great fantasy day despite his inefficient running. He remains an offensive centerpiece, which is what we want out of a weekly fantasy starter. Also, Curtis Samuel (groin) just can’t stay healthy.

Marquez Callaway, one of my favorite preseason WR bargains, is gradually breaking out. Yesterday marked his second fantasy-friendly outing in three weeks. He’s a nice sell-high candidate, with Michael Thomas tentatively scheduled to return at the end of this month. Elsewhere, keep an eye on the status of Taysom Hill (concussion) and Deonte Harris (hamstring).

Chuba Hubbard stepped up big time. Any chance that Royce Freeman could have pushed his way into a timeshare faded last week and was firmly extinguished yesterday. Hubbard will be a high-priced handcuff when Christian McCaffrey returns — possibly next week. Meanwhile, Devonta Smith led all Eagles receivers with 8 targets and now has a healthy 39 on the season. With Jalen Reagor fading, Smith is the unquestioned leader of Philadelphia’s receiving corps.

James Robinson was the best running back in this game, and it wasn’t close. He’s outperforming last year’s incredible rookie numbers, which is doubly incredible. More notably, Laviska Shenault Jr. and Marvin Jones combined for 2 catches on 7 targets. That’s not a recipe for success for the Jags.

A.J. Brown’s return didn’t change things for the Titans. This remains Derrick Henry’s offense. Every week he dominates, I look more ridiculous for my preseason warning. Of course, he remains on pace to reach 483 carries, which would be 16% more than Larry Johnson’s all-time record.

Brandin Cooks took a backseat to journeyman Chris Moore, who manufactured nearly 20% of his career receiving yards in one afternoon. With Chris Conley also making noise, it’s fair to wonder if Cooks no longer reigns supreme in Houston’s receiving corps.

Damien Harris’s second fumble of the season opened a small door for Rhamondre Stevenson — or perhaps a larger one if Bill Belichick trades for help (Marlon Mack?). But let’s not overreact. Harris returned to the game, so Belichick isn’t giving up on him yet.

Which fantasy-relevant players from the 4 PM ET slate bear discussion?

Since an absolutely blistering start that handed Las Vegas a 3-0 record, Derek Carr’s play has plummeted. Going up against the Chargers and Bears isn’t the easiest task. But this is also what we normally get with Carr in fantasy, and he’s now more of a situational streamer.

For Chicago, Damien Williams and Khalil Herbert split the backfield work with 18 touches apiece. Those banking on “Williams the Bellcow” had to be happy with the production. But three of Chicago’s next four games are against the Bucs, 49ers, and Steelers. Williams is a good sell-high guy with Herbert not going anywhere.

A fantastic rushing attack facing a fantastic rushing and passing attack. And a surprise hero in Cleveland who nearly made all the difference. For Los Angeles, Mike Williams looked like vintage Keenan Allen, and until the fourth quarter, Allen looked like pre-vintage Mike Williams. After getting shut down last week, Williams returned to greatness despite my bad warnings to sell high. Meanwhile, David Njoku will be a hot waiver pickup after his 7-149-1 outburst. Of course, nothing suggests this is a sign of things to come, so tread carefully.

Dalton Schultz has now crushed it for three straight weeks. His consistent targets and sky-high catch rate make him impossible to ignore. With Amari Cooper still visibly hobbled, it will be interesting to see if Schultz remains a top-three target for Dak Prescott.

Have we ever seen a team’s No. 1 QB, RB, and WR all get knocked out in the same game? Simply brutal. It might take a day or two for the fantasy world to make sense of what just happened and how losing Daniel Jones, Saquon Barkley, and Kenny Golladay could impact the Giants going forward. That includes whether Kadarius Toney is about to become a weekly must-start — if he’s not suspended for throwing a punch in the fourth quarter.

Credit San Francisco for shutting down an Arizona offense that had scored 30+ points in every game this season. Still, DeAndre Hopkins stepped up with his best performance of the season. He’s a major buy-low candidate, given his upside the rest of the way.

Trey Lance was both horrible and phenomenal. As I’ve been writing since July, the sooner the 49ers got him on the field, the sooner he’d acclimate to the NFL. Games like this one are critically important for his development. He’s a QB1 waiting to happen if head coach Kyle Shanahan gives him a chance.

What were the biggest fantasy football takeaways from Sunday Night Football in Week 5?

Tyreek Hill suffered a knee injury, and we should know more about that soon.  And Clyde Edwards-Helaire had to be carried off the field. He was later seen walking carefully to the locker room. The injury took place right before Patrick Mahomes’ pick-six gave Buffalo an 18-point lead. The Chiefs are reeling, and Darrel Williams and Jerick McKinnon might be carrying the backfield load, at least in the near term.

If Edwards-Helaire is sidelined, I’m betting Williams will earn more touches, while McKinnon could earn some PPR love if things break right. Meanwhile, Dawson Knox keeps getting it done for the Bills. The 24-year-old did not live up to his third-round draft hype his first two seasons. But he certainly has this season.