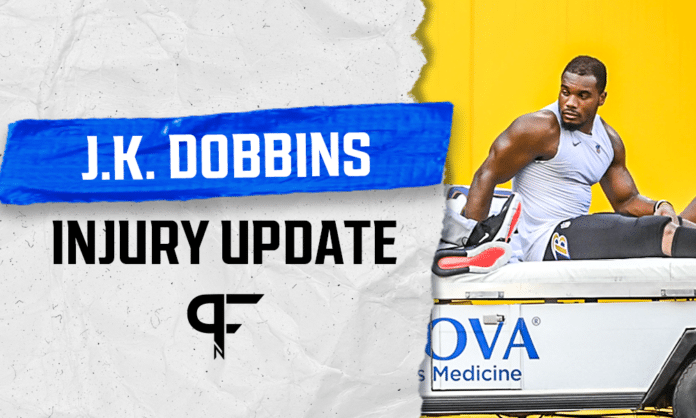 After suffering a potentially devastating knee injury, what does Ravens RB J.K. Dobbins' injury mean for both Gus Edwards and Justice Hill?

By Tommy Garrett
August 29, 2021
What's in this article? Click to show
J.K. Dobbins suffered a knee injury vs. Washington on Saturday
How does J.K. Dobbins’ injury impact the fantasy value of Gus Edwards and Justice Hill?
Justice Hill has sneaky value in PPR formats

Unfortunately for the Baltimore Ravens, RB J.K. Dobbins suffered what appeared to be a serious knee injury in their third preseason game, causing a massive ripple effect in fantasy football as many are holding their drafts this weekend. Based on what we know so far, how should fantasy managers view Dobbins, and how does this injury impact fellow Ravens RBs Gus Edwards and Justice Hill?

J.K. Dobbins suffered a knee injury vs. Washington on Saturday

As much as I hate this saying and think it is overused, it’s accurate. Unfortunately, the list of running backs to suffer injuries struck again, this time to the Baltimore Ravens and RB J.K. Dobbins.

After hauling in a screen pass at the 9:00 mark of the first quarter, Dobbins turned upfield and was quickly met by two defenders, with Washington CB Jimmy Moreland coming in low from the front and LB Jordan Kunaszyk wrapping him from behind. Both hits (more importantly, Moreland’s hit) came right as Dobbins was planting his left leg and was locked out — the worst-case scenario.

Dobbins went down in immediate pain while clutching his left knee. Trainers and Baltimore’s medical staff were quick to aid Dobbins and assisted him to the sidelines as he could not put any weight on his left leg. After exiting the blue tent, he was quickly carted off the field and ruled out for the rest of the game.

There has been no official word from the Ravens on Dobbins’ injury, but for those who saw it happen, it is not good or pleasant to watch. Dobbins will undergo an MRI to assess the potential ligament damage and set a potential timeline on how much time he could miss. On Sunday, Adam Schefter reported that Dobbins will miss the season with an ACL tear.

With Week 1 of the NFL season just two weeks away, this timing could not have been any worse. At best, it’s a short recovery. Still, fantasy managers should brace themselves for the potential that Dobbins’ 2021 season is over, joining Cam Akers and Travis Etienne as running backs to have their season ended prematurely.

After breaking free of the Ravens’ three-headed committee, Dobbins quickly established himself as one of the breakout candidates of the 2021 fantasy season.

From Weeks 1 through 6, Dobbins (RB39) led the backfield in both fantasy points (7.6 ppg), snap percentage (36.6%), and efficiency at 1.17 pts/opp on just 39 total opportunities. But when splitting snaps with veteran Mark Ingram and Gus Edwards, the volume simply was not at a level that fantasy managers could trust.

A change in approach and an injury to Ingram opened up the flood gates for Dobbins, and he didn’t waste this opportunity. From Week 8 on, Dobbins was a must-start for fantasy managers, as the Ravens made it a point to get the ball in his hands.

Following the bye, he led the Ravens’ backfield in snaps (48%) while averaging 12.8 touches, 77.4 total yards, and .77 touchdowns per game. This includes a missed game due to NFL protocols.

Dobbins totaled 109 rushes for 651 yards and 7 touchdowns in that span. While not a massive amount, he did see a bump in fantasy points due to work in the passing game. Dobbins caught 7 of 10 targets for 46 yards. Averaging 13.6 ppg, Dobbins was the RB11 in fantasy with a hyper-efficient 6.0 yards per carry and 1.03 pts/opp.

During the fantasy playoffs (Week 13 through 17), Dobbins was the RB6 in 0.5 PPR formats, averaging 16.5 points per game, much in part to his Week 17 explosion, rushing for 160 yards and 2 touchdowns.

Dobbins’ potential breakout has been put on hold

With many fantasy drafts either going on or set to take place over the next week, this places a massive question mark over Dobbins’ upcoming season. As the RB14 in fantasy drafts, Dobbins’ ADP was 25.1 in 1QB leagues, establishing him as a late-second-round/early-third-round pick.

Based on what we currently know about Dobbins’ injury, he cannot be taken at this current ADP,and likely should not be drafted at all. Fantasy managers should not risk an early pick on a player that could miss an extended time frame, and potentially the entire season.

Dobbins was projected to see a massive role in the range of 215 carries, 30 targets, 1,250 total yards, and 11 touchdowns. Assuming that Dobbins does miss time, Gus Edwards and Justice Hill will now be the primary RBs for the Ravens.

How does J.K. Dobbins’ injury impact the fantasy value of Gus Edwards and Justice Hill?

Edwards is a must-draft player. Especially for those who have drafts before we get an official update and timeline. Gus Edwards was already on my sleeper and breakout lists for this season, but I hate that this is how it might happen. Edwards did not need additional help to return value.

Entering his fourth season, Edwards has seen over 133 carries and 700 rushing yards in each of his three years in Baltimore. In 2020, he faced a stacked box (eight-plus defenders) the sixth-most at 34%, but he led Baltimore RBs in carries (144) while finishing the season 21st in rushing yards (723).

What I don’t think people realize is how well Edwards played last year. From Week 6 on, Edwards was the RB26 in PPR scoring with 9.9 ppg. In fact, Dobbins was trailing him in fantasy points heading into Week 17 until the rookie went off for 160 yards and 2 touchdowns. Additionally, Edwards led the Ravens in rushing attempts inside the 10-yard line (17), even ahead of QB Lamar Jackson (16).

No team has run more than the Ravens over the last four seasons, averaging 539.5 attempts per season. Knowing that Edwards would be in line for over 220 attempts makes him an absolute must-draft in fantasy. His ADP will also reflect this sentiment, currently the RB42 (141.1 ADP).

If Dobbins is out for an extended period of time, Edwards moves into the high-end RB3 to low-end RB2 range in rankings. He is somewhere in the conversation with Myles Gaskin, Mike Davis, and Josh Jacobs. The results of Dobbins’ MRI will determine where Edwards ends up.

Hill has gone under the radar in fantasy drafts and seen little action in his career. In his two seasons out of Oklahoma State, Hill has 70 carries for 285 yards and 2 touchdowns with 13 receptions on 20 targets for 90 yards.

While not an inside-the-tackles-style rusher, he has shown promise as a receiver, even going back to his sophomore season at OSU, where he caught 31 balls. Although the Ravens have not heavily targeted the position, the increased snap count and touches should push Hill up draft boards, making him a late-round stash.

The Ravens could look for a veteran

As teams trim down rosters, several players are looking for jobs. Two big RB names that stand out for the Ravens in the free-agent market are Le’Veon Bell and Todd Gurley. Bell spent last season playing for the Kansas City Chiefs, with Gurley spending the past season with the Atlanta Falcons.

If Dobbins’ injury is season-ending, they could look to bring someone in until he is back on the field. Also, keep an eye on the potential return of Mark Ingram. The Texans have a crowded backfield, and there is always the possibility Ingram ends up a cut candidate. After all, we have seen stranger things happen in Houston.