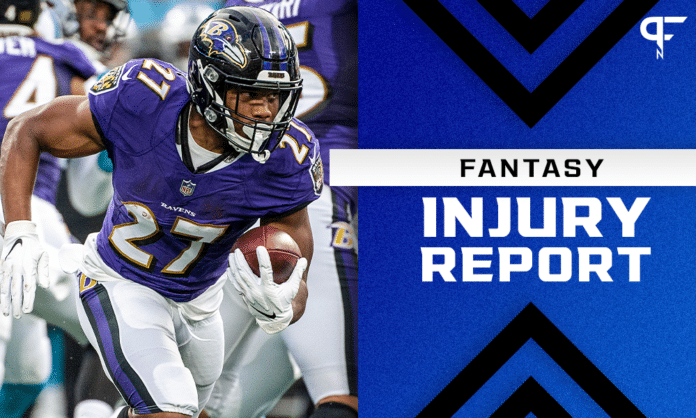 With the 2021 NFL season officially underway, here are some critical injury reports to stay updated on for fantasy football for Week 1.

While rankings and projections are beneficial, nothing is more critical for fantasy football than following injuries, as the landscape will change with nearly every significant one. Now that we are roughly 24 hours away from the opening Sunday of the 2021 NFL season, here is an update on some critical injury reports to watch and their fantasy football impact for Week 1.

According to ESPN NFL Insider Adam Schefter, head coach Frank Reich announced on Friday [September 10] that Wentz would be the starting QB for the Colts’ Week 1 matchup against the Seattle Seahawks. Wentz underwent foot surgery in July and had a 5-to-12-week timeline. Nonetheless, he was back at practice within two weeks post-surgery and had been tracking to be ready for the opening week.

According to David Lombardi of The Athletic, head coach Kyle Shanahan said Lance should be active for the team’s season opener. Lance will serve as the backup after Shanahan named Jimmy Garoppolo the team’s starting QB during the preseason. Shanahan announced to the media [August 30] the rookie QB had a “small chip” in his right index finger. While not likely to be a fantasy asset this week, this update signifies that we could see him on the field soon.

Isn’t there a saying that bad news comes in threes? Well, if not, it does now. During practice on Thursday, Ravens RB Gus Edwards suffered what was confirmed to be a torn ACL during practice. He joins J.K. Dobbins (ACL) and Justice Hill (Achilles/waived) as RBs the Ravens lost to season-ending injuries. The Ravens signed Le’Veon Bell, Latavius Murray, Trenton Cannon, and Devonta Freeman to round out their depth chart, with Ty’Son Williams likely the lead back for Week 1.

After missing the Chargers’ last two practices with a hamstring injury, Ekeler participated on Friday. He is officially listed as questionable for the Chargers’ Week 1 game against the Washington Football Team. Head coach Brandon Staley said on Friday that Ekeler “looked good out there.”

He missed six games last season due to a severe hamstring injury but appears headed in the right direction. He is a mid-RB2 — if available in Week 1 for fantasy, start him. However, there is a risk of aggravating the injury, plus the potential for limited snaps vs. a stout defense. If there is not a surprising update, Ekeler should be good to go for fantasy.

Per Jordan Raanan of ESPN NFL Nation, Barkley (ACL) is questionable for Week 1. Barkley has reportedly been progressing well as he continues his recovery from a torn ACL he suffered in Week 2 of last season. He has seen limited action this summer with no reps in any of the team’s preseason games. With the Giants playing three games in 14 days and being the center of the franchise, it would not be surprising to see Barkley on a snap count on Sunday against the Ravens.

Despite a nagging groin injury that plagued him this preseason, Swift is full-go for the Lions’ Week 1 game against the 49ers. He was not listed on the team’s injury report, according to Dave Birkett of the Detroit Free Press.

“It looked like they’re moving around pretty good,” Reid said. “I think we’ll be okay there.”

Edwards-Helaire had been participating in walkthroughs and practices after avoiding anything significant.

Jacobs was limited in practice on Thursday with a toe injury but told Jesse Merrick of KSNV News 3 Las Vegas on Friday that he “did everything today. I feel good to go.” There should be no concern for Jacobs’ fantasy status for Week 1.

According to Ralph Vacchiano of SNY, Perine (foot) is questionable for Week 1 against the Panthers. Perine’s full participation in Friday’s practice suggests he’s trending in the right direction. Still, he could not shed his injury designation.

According to ESPN NFL Insider Adam Schefter, Washington has placed Samuel on injured reserve (groin) and will be eligible to return in three weeks. Since the spring, Samuel has been dealing with a groin injury, and when trying to participate for the first time on Wednesday [September 8], he came off the field limping.

There is concern that this injury could last longer than the initial three-week IR stint. Terry McLaurin will maintain a massive target share, and Antonio Gibson, Logan Thomas, and J.D. McKissic will be significant players in the passing game.

Also, keep an eye out for Cam Sims. Ryan Fitzpatrick has been enamored by his film and play, even going so far as to call former Washington QB Alex Smith to discuss Sims. At 6’5″, his catch radius could be a significant advantage in the red zone.

According to NFL Network Insider Ian Rapoport, the Jets have ruled Crowder out for Week 1 against the Panthers. Crowder tested positive for COVID-19 and remains in protocol. Elijah Moore will be the primary slot WR and should see a boost in opportunities.

Per Nick Underhill of NewOrleans.Football, the Saints have placed Smith on IR. Smith was added to the injury report on Thursday [September 9] with a hamstring injury. Smith has been working all summer with QB Jameis Winston in Florida. However, he will have to wait at least three weeks to see if any chemistry developed.

On August 31, Thomas (ankle) was placed on the PUP list, meaning he cannot return until after their Week 6 bye. At the time of his surgery, Thomas’ initial timeline was 4-5 months.

After limited participation this week in practice, it appears that Golladay (hamstring) will play on Sunday against the Denver Broncos. He was not listed on the Giants’ Friday injury report.

Bills head coach Sean McDermott also said that Sanders would be listed as questionable for the game. He’s been limited in practice this week with a foot injury. If he cannot play, Gabriel Davis would see a boost in fantasy value for Week 1.

According to Schefter, no determination has been made regarding Beckham’s status for their Week 1 matchup with the Kansas City Chiefs. Browns head coach Kevin Stefanski said they “will use the next 48 hours with all of these guys and determine who is playing and is not. We will let you know 90 minutes before the game.” Stefanski is referring to the inactive list that teams must publish 90 minutes prior to kickoff.

Bears head coach Matt Nagy expects Mooney (back) to play Sunday vs. the Rams despite limitations in practice this week. He was listed as questionable in the Bears’ final injury report.

After a DNP on Thursday, Agholor was a limited participant on Friday and is listed as questionable for the Patriots’ Week 1 contest against the Miami Dolphins, per Zack Cox of NESN.

Which fantasy-relevant tight ends are on the injury report as the season draws closer?

Despite working on the side of practice on Friday, the Giants have listed Engram as out for Week 1 against the Broncos, per Jordan Raanan. Engram has not practiced all week due to a nagging calf injury he sustained during the final preseason game. Former Vikings TE Kyle Rudolph will be the starting TE but is likely outside the fantasy radar for this week.

According to Zac Stevens of DNVR Broncos, Fant will play on Sunday after being a full participant on both Thursday and Friday. He is a low-end TE1 for fantasy this week. Fant faces stiff competition for targets with Courtland Sutton back from injury (ACL) and breakout candidate Jerry Jeudy.

Trautman (ankle) is not listed on the official injury report ahead of the season opener in Week 1 against the Green Bay Packers. At the time of his injury, it was up in the air whether Trautman would be ready to play in the first regular-season game. Trautman remains a breakout TE contender for fantasy as he takes over following the offseason departure of Jared Cook.