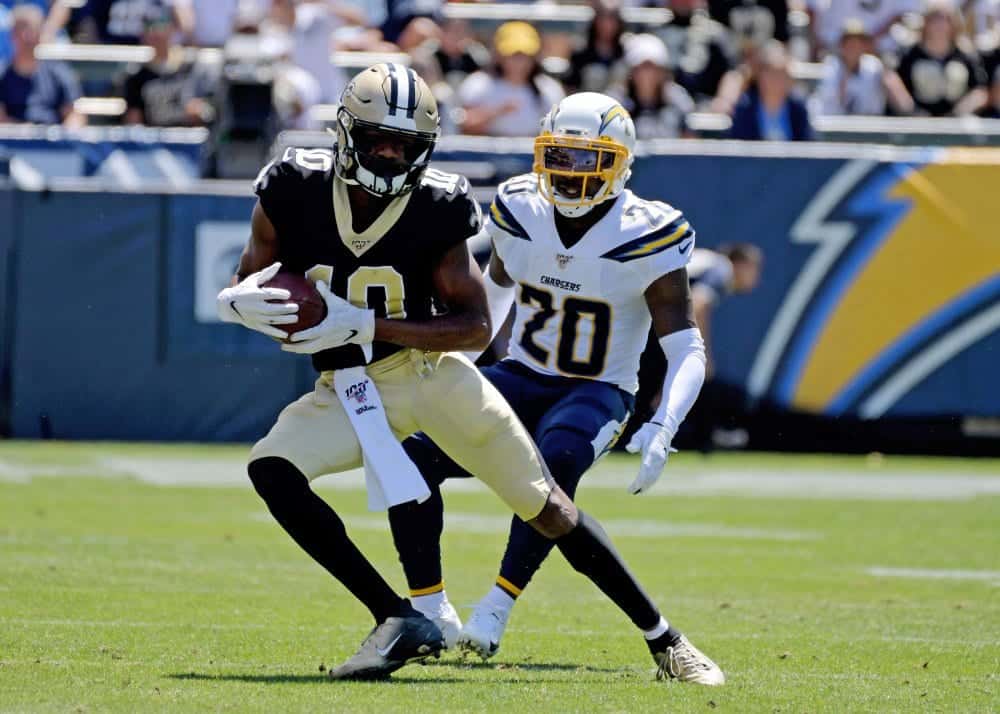 The term “fantasy football sleeper” gets tossed around more than the terms “system quarterback” and “tank.”

Don’t get me started. Thank the good lord for fantasy football!

The start of 2019 is upon as fantasy drafts are finishing up all over the world before the seasons kicks-off Thursday night in Chicago. This is a look at the fantasy football sleeper in a deeper way than the usual terms. Sure a sleeper can be considered to be someone like Dede Westbrook, a name often mentioned by this articles scribe. Westbrook is a sleeper no more, however, and for my money, a true fantasy football sleeper is one that can be on the waiver wire in many leagues once Week 1 begins.

This piece will focus on those who are owned in roughly less than 40% of main-stream leagues out there. That leaves out players such as Anthony Miller, Curtis Samuel, or James Washington. They are all being selected. We are not searching for “Mr. Irrelevant,” which is the all-but-cuttable last selection in the NFL Draft, but for “Mr. Relevant-in-a-Week.”

Here are the fantasy football sleeper supremes to select before the stats count.

We begin with the undrafted rookie free agent who made huge waves a few weeks ago, Miami Dolphins wideout Preston Williams. His preseason Week 1 was an epic introduction to the league, however, since that game he has lacked any significant follow-up production.

Pay that no mind.

With Kenny Stills being traded to Houston last week, this makes the Miami wide receiver room a very obvious fill-in-the-blanks game. There is DeVante Parker on one book-end and players like Albert Wilson and Jakeem Grant are more slot-plays who could play the outside if needed. Make no mistake that Williams is a flanker or split-end type player for Miami and will start opposite Parker. He will be targeted early, often, and certainly when down.

Word around the beach-fire is that Williams and Josh Rosen have such chemistry that when the time comes, each could make for intriguing daily fantasy plays with their deep-play connection potential. When it comes to finding that last offensive player, make it a guy who has a legitimate shot at a number one wideout job on a team. Especially, look for a team expected to be playing from behind a lot.

Williams is currently owned in just two percent of Yahoo leagues and four percent of CBS leagues. The fact of the matter is that most Mr. Irrelevant fantasy picks end up as the first dropped player come waiver wire time, so why not go big with a high-reward and zero risk pick in a guy like Williams?

Moving to the antithesis of the Dolphin offense, the New Orleans Saints have weapons all over the place. We know of Michael Thomas and Alvin Kamara, and then there is Ted Ginn as a veteran home run hitter. However, Drew Brees needs that solid young WR2 and that guy could be Tre’Quan Smith. Owned in just 18% of Yahoo leagues and the same percentage in CBS leagues, Smith looks to capitalize on what could be the NFC’s most prolific aerial attack.

Best Ball league owners are wise to stream Smith to Brees as a few big days are likely. Smith is being drafted with an ADP of 188 in standard leagues, so he is there for the taking with the last pick that isn’t a kicker. Smith showed glimpses as a rookie in 2018 with a few solid weeks of production. He hit a two-score game back in Week 4 and followed that up a month later with a 10 reception on 13 target gem-of-a-day that accounted for 157 yards and a score. He also scored the previous week, so the rapport and trust are there, and ready to explode in 2019.

Now we are on the theme of taking advantage of potent offenses. The NFC has the Saints and the AFC has the Kansas City Chiefs. Enter Mecole Hardman, owned in just 16% of Yahoo leagues and 28% of CBS leagues.

Perhaps the rookie fantasy football sleeper of them all this season.

The freshman is a scoring threat simply because of his QB, and when shoot-outs occur, which are inevitable with Kansas City, Hardman is a must for deeper yardage-based and TD-only leagues. Should Sammy Watkins hit the injury bug, Hardman at a flex-play value is lucrative with a player being selected with a current ADP of 165.

Hardman has 4.3 40-yard-dash speed and should be a daily fantasy option every week when looking for an economical option who can get you 15 points on a single play. He is a must-target in all dynasty and keeper formats and could be a waiver-wire play that breaks those FAAB banks early in the season. Make life easy, and roster him instead of a veteran running back handcuff.

I realize this piece is more “in with the new and out with the old,” but let’s look at one veteran who is entering his seventh NFL season and third with the San Francisco 49ers. Marquise Goodwin has shown signs of fantasy-relevancy and now just needs quarterback consistency now.

Last season was a wash for him and for the Jimmy Garoppolo-less Niners. Garoppolo suffered a season-ending injury back in Week 3 and Goodwin played in just 11 games himself. That Week 3 game, however, did feature a Garoppolo to Goodwin touchdown connection.

Rewinding a few seasons to 2017, Goodwin had a near 1,000-yard campaign on 56 receptions, so the potential is there for the former third-round pick of the Buffalo Bills back in 2013. A full season of Garoppolo can lead to a number one WR type of season for Marquise.

All in all, you could do a lot worse with your “Mr. Irrelevant” pick than Goodwin. He is currently owned in less than half of all CBS leagues and just 29% of Yahoo leagues. His ADP of 183 makes him a perfect last selection who could perhaps see some time if the injury bug hits your roster, and he finds some full season magic with Jimmy G.

Jason Sarney is a writer for the Pro Football Network covering Gambling and Fantasy Football. Jason is also a host of the Against the Spread podcast for PFN. You can follow him @JSarney_PFN365 on Twitter.