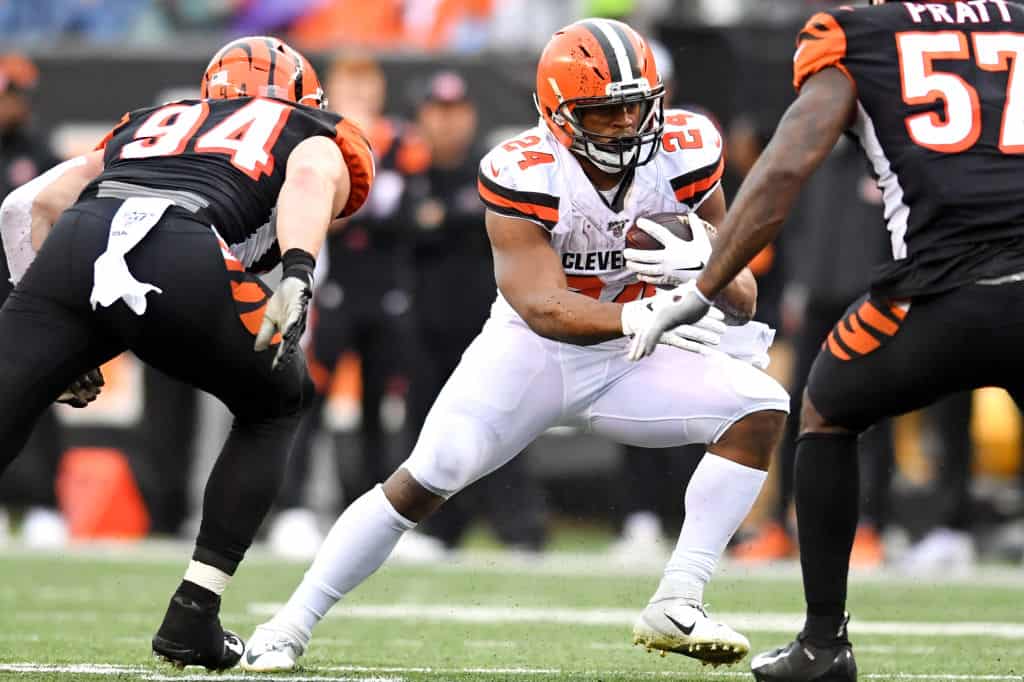 CINCINNATI, OH - DECEMBER 29, 2019: Running back Nick Chubb #24 of the Cleveland Browns carries the ball in the fourth quarter of a game against the Cincinnati Bengals on December 29, 2019 at Paul Brown Stadium in Cincinnati, Ohio. Cincinnati won 33-23. (Photo by: 2019 Nick Cammett/Diamond Images via Getty Images)
What's in this article? Click to show
Nick Chubb’s Week 1 fantasy performance
Can Chubb bounce back against the Cincinnati Bengals on TNF?
At what point do you bench Nick Chubb in fantasy leagues?

Entering the season as a borderline first round pick on the majority of fantasy football platforms, Cleveland Browns running back Nick Chubb enters Week 2 as one of fantasy football’s biggest disappointments. After scoring only 5.1 fantasy points and finishing as RB50 in half-PPR formats, is it time to panic or can Chubb bounce back from his abysmal Week 1 performance? Let’s dig in.

After coming into the season as one of the most-hyped running backs in fantasy football, Chubb put up an absolute dud in Week 1 of the 2020 NFL season. His 5.1 fantasy points was one of the worst Chubb has had in his young career.

Since taking over as the Browns starting running back in Week 7 of the 2018 NFL season, Chubb has averaged 15.17 fantasy points per game. By all measures, his 5.1 points in Week 1 was a statistical anomaly unlikely to become a regular occurrence.

While the narrative could be written that the Baltimore Ravens simply have the secret to stopping Chubb, the bigger concern is that three of Chubb’s worst fantasy performances came with Kareem Hunt in town. Even if brighter days are sure to come for the Browns starter, Hunt’s continued involvement in Cleveland’s offense will make it extremely difficult for Chubb to reach his fantasy ceiling in 2020. Meanwhile, you’re seeing why Hunt was one of Pro Football Network’s favorite running backs to target in 2020 fantasy drafts.

Both backs had a fairly even timeshare in Week 1, with Hunt (36 snaps, 13 rushes, six targets) actually receiving more work than Chubb (35 snaps, 10 carries, one target). The running backs usage was likely due to Cleveland trailing by double-digits for the majority of the game, but the days of Chubb receiving massive bell-cow volume are all but over.

Can Chubb bounce back against the Cincinnati Bengals on TNF?

From a game-script perspective, Week 1 couldn’t have gone any worse for Chubb. The Browns were down double digits early, trailed 24-6 at halftime, and were playing catch-up all game. With the Thursday Night Football clash with the Cincinnati Bengals expected to be competitive for all four quarters, Week 2 sets up as the classic bounce-back game for Chubb and the Browns running game.

The Bengals were highly-competitive in Joe Burrow’s first start as an NFL quarterback, but their defense doesn’t pose the same threat as the Ravens stout defensive front. The Chargers rushed for 155 yards (4.0 average) on Cincinnati’s defense, and Week 2 figures to be more of the same if star defensive tackle Geno Atkins sits again due to injury.

At what point do you bench Nick Chubb in fantasy leagues?

While the thought of benching Chubb is appealing, I do warn you to be weary of last week’s results clouding your judgement. The Browns trailed for the majority of the game against Baltimore, leaving the game-script to favor the pass-catching prowess of Hunt.

The Browns will be bad this season, but they won’t be bad enough to be down double digits early in every game. There will certainly be contests in which Chubb is an RB1 in fantasy football, but you have to watch out for potential land-mines more than ever this season. Hunt is signed to the Browns long-term, and barring injury or suspension, his role in this offense is secure.

So, if not now, when do you bench Chubb? Unless you have a far superior option on your bench, which is probably unlikely in redraft leagues, you have to role the dice on Chubb for at least one more week. The Browns should be more competitive against the Bengals on Thursday Night Football, putting Chubb in-line for more volume than he received in Week 1. If Chubb flops again in primetime, however, it’s officially time to start looking for better options on your bench.

In this article:Featured, featured, nick chubb