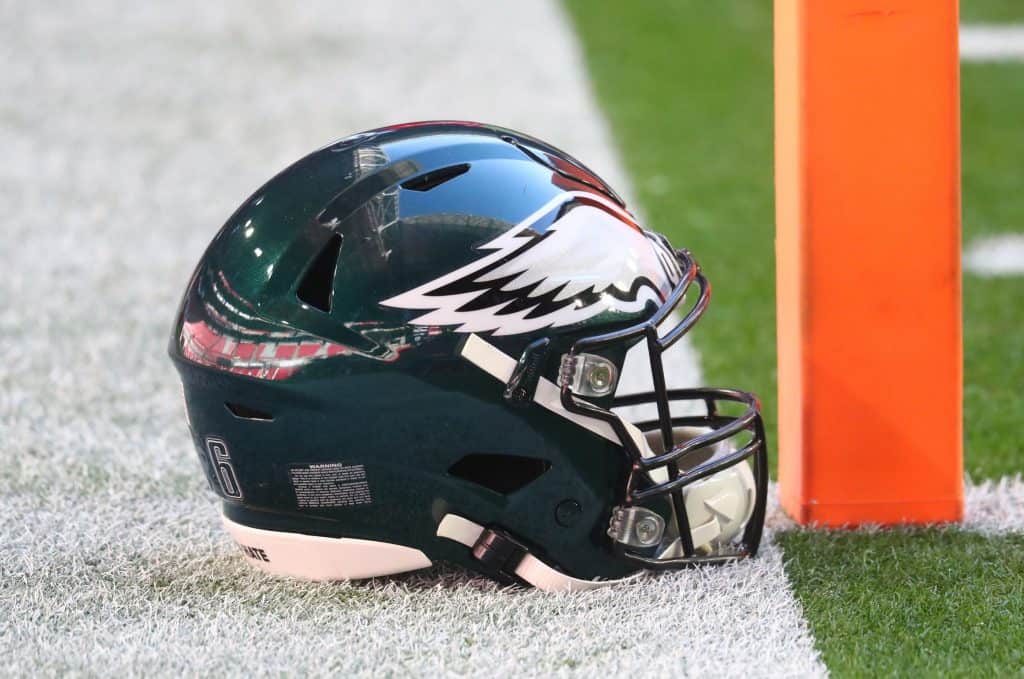 After a disappointing 2020 season, the Philadelphia Eagles have launched their rebuild. Strong in the trenches, the Eagles possess one of the top offensive and defensive lines in the division. However, past that, it’s hard to see how they can be competitive. Fans hope Jalen Hurts is the future of the franchise, but his rookie season indicated otherwise. The receiving unit is arguably the worst in the NFL. Getting receiving weapons in the 2021 NFL Draft for this team will be a priority in this 2021 Eagles 7-Round Mock Draft.

Of the top cornerbacks in the 2021 NFL Draft class, none play with as much confidence or swagger as Jaycee Horn. Son of four-time Pro Bowl receiver Joe Horn, Jaycee is arguably the top corner this year. While some prefer the raw athletic ability of Caleb Farley or the calm and collect play of Patrick Surtain II, Horn’s CB1 mentality has caused many to love his tape.

Horn can operate in a press-man or zone-heavy capacity thanks to his instincts and explosion. Horn also brings value as a blitzer. He recorded 3 career sacks and 7 tackles for loss in his college career. He would be a lock to start opposite Slay during his rookie season.

When the Eagles traded for Slay last year, they were hoping to get a shutdown man corner who can compete against opposing WR1s all season. Thing’s didn’t exactly work out that way, but not all the blame should be placed on Slay.

Philadelphia’s secondary as a whole was burnt toast, and Jim Schwartz has long been asking far too much of his outside cornerbacks. With Schwartz now out of the picture, and Horn locking down the other side of the field, we could see a resurrection from Slay. With Horn’s selection in this 2021 Eagles Mock Draft, Philadelphia now has a secondary competitive with Washington and New York for the top defensive backfield in the division.

After going cornerback in the first, one of Rashod Bateman or Terrace Marshall Jr. needed to fall to this selection. The Eagles desperately need to find an X receiver before the season. Some fans think Travis Fulgham has the talent to do that, but he was raw and inconsistent last year. J.J. Arcega-Whiteside has the size to play the X, but it’s not even a guarantee he makes the roster this season.

Marshall stands true at 6’3″, possessing the best size of any Day 1 or 2 receiver. He ran a blazing 4.39 40-yard dash at his pro day while also jumping 39 inches on the vertical jump. He recorded 23 touchdowns in the last two seasons, despite being the offense’s third receiving option in 2021 and playing with poor QB play in a shortened season this year.

Marshall would become the Eagles’ top receiver from Day 1. Jalen Reagor might have greater upside due to his game-breaking athletic ability, but Marshall would be the immediate alpha. He provides a security blanket for Hurts, thanks to his ability to consistently win contested situations. He can also break a play down the field from time to time, as cornerbacks don’t typically expect him to be so fast at his size.

Pairing Marshall and Reagor together is a solid start to a talented receiving corps. Philadelphia is ecstatic Marshall fell to No. 37 in this 2021 Eagles 7-Round Mock Draft.

It’s unclear how much longer Jason Kelce will be playing. If the Eagles are wise, they’ll target one of the top guys in the 2021 NFL Draft class.

A strong center class overall, there are two obvious top dogs. The first is Creed Humphrey from Oklahoma, and the other is Landon Dickerson of Alabama.

Dickerson is substantially better than this draft position, and some consider him to be a first-round player. However, he’s suffered four season-ending injuries in his career, something that will cause significant reservations from NFL teams. If Dickerson can stay healthy, the Eagles could replace Kelce with a player capable of having a similar level career. This is saying something, considering I believe Kelce is the best center of the 2010s.

At one point, it seemed like Dylan Moses was a lock to go top 15. However, an ACL injury and underwhelming senior season have dropped his stock to Day 2 territory.

Moses is supremely athletic and will be two years removed from his knee injury when his rookie season starts. The Eagles desperately lack talent at the linebacker position, and Moses provides both physical tools and experience.

He’s flashed as a run defender and as a coverage linebacker. If the Eagles can tap into those flashes and bring them out consistently, it could be a boon, particularly when you consider how well Philly’s defensive line clogs the line of scrimmage. This is good value for Philadelphia in this 7-Round 2021 Eagles Mock Draft.

While I view the Eagles’ DL in high regard, it’s impossible to ignore their age. Brandon Graham just turned 33, and Fletcher Cox turns 31 this season. It would be wise to invest in a defensive lineman who fits their system.

Pittsburgh’s Patrick Jones makes a lot of sense as an edge rusher who possesses both size and athletic ability. One of the most underrated edge rushers in the class, in my opinion, Jones could be the player that eventually succeeds Graham. He has double-digit sack upside and is a capable run defender. He provides Year 1 depth, with the upside to start down the line. Jones and Josh Sweat could absolutely be a successful pass-rush duo.

In this 2021 Eagles 7-Round Mock Draft, Philadelphia double-dips from the University of Pittsburgh. Jones and Jaylen Twyman harassed ACC quarterbacks together and can now grow in the NFL together.

Similar to the reasoning I used to take Jones, Twyman would provide depth in Year 1, with the talent to eventually take over as the starting three-technique. Learning behind guys like Cox and Javon Hargrave would be huge for Twyman, whose pad level is too inconsistent to see any substantial playing time as a rookie.

When everything is on for Twyman, he’s arguably the top pocket-pushing interior pass rusher. However, the flashes happen far too infrequently to commit heavy draft capital in him. Still, the selection of Jones and Twyman are forward-thinking picks as Philadelphia undergoes their rebuild.

While Ertz is still technically on the roster, it’s clear he likely won’t be with the Eagles when the 2021 season kicks off. Goedert is good and should flourish as the TE1 in Philly. Nevertheless, that leaves a hole behind Goedert the team may fill in the 2021 NFL Draft.

Matt Bushman of BYU fits that role to a T. He could have been a Day 2 pick but suffered a season-ending injury after returning to school for his senior season. Quality blocker, good athlete, and consistent hands, Bushman has all the tools to fill the void behind Goedert.

Cornell Powell reminds me a bit of Washington superstar Terry McLaurin. He doesn’t possess the same game-breaking speed, but there’s a familiarity in their path to the NFL. Both played at a top-three program, had underwhelming production due to a loaded receiver room, and a well-developed skill set.

Powell’s hands and route running both project well to the NFL, and the Eagles’ new staff likely wants to bring in their own guys at the receiver position. Powell might never be a star, but he can be a productive WR2 or WR3. He provides good value towards the end of this 7-Round 2021 Eagles Mock Draft.

Injuries have ravaged the Eagles’ offensive line lately, so adding experience depth makes sense on Day 3. Jack Anderson was a long-time starter at Texas Tech, and he possesses the tools to play center or guard. He’s a good athlete, which Philly loves in their linemen, and could be high-quality depth. Anderson is good enough to be a spot starter, but they don’t pick him with the expectation he’ll develop past being a good backup.

One of the top run defenders in the class, K.J. Britt personifies the term “thumper.” He provides next to nothing in coverage and shouldn’t be on the field more than 20-30% of snaps. However, as far as the Eagles’ linebackers go, nobody is similar to Britt. They lack size or strength and don’t fill holes well. Despite all his struggles in other aspects of the game, Britt guarantees to bring attitude and aggression to the Eagles’ second level. As a result, Britt rounds out this 2021 Eagles 7-Round Mock Draft.