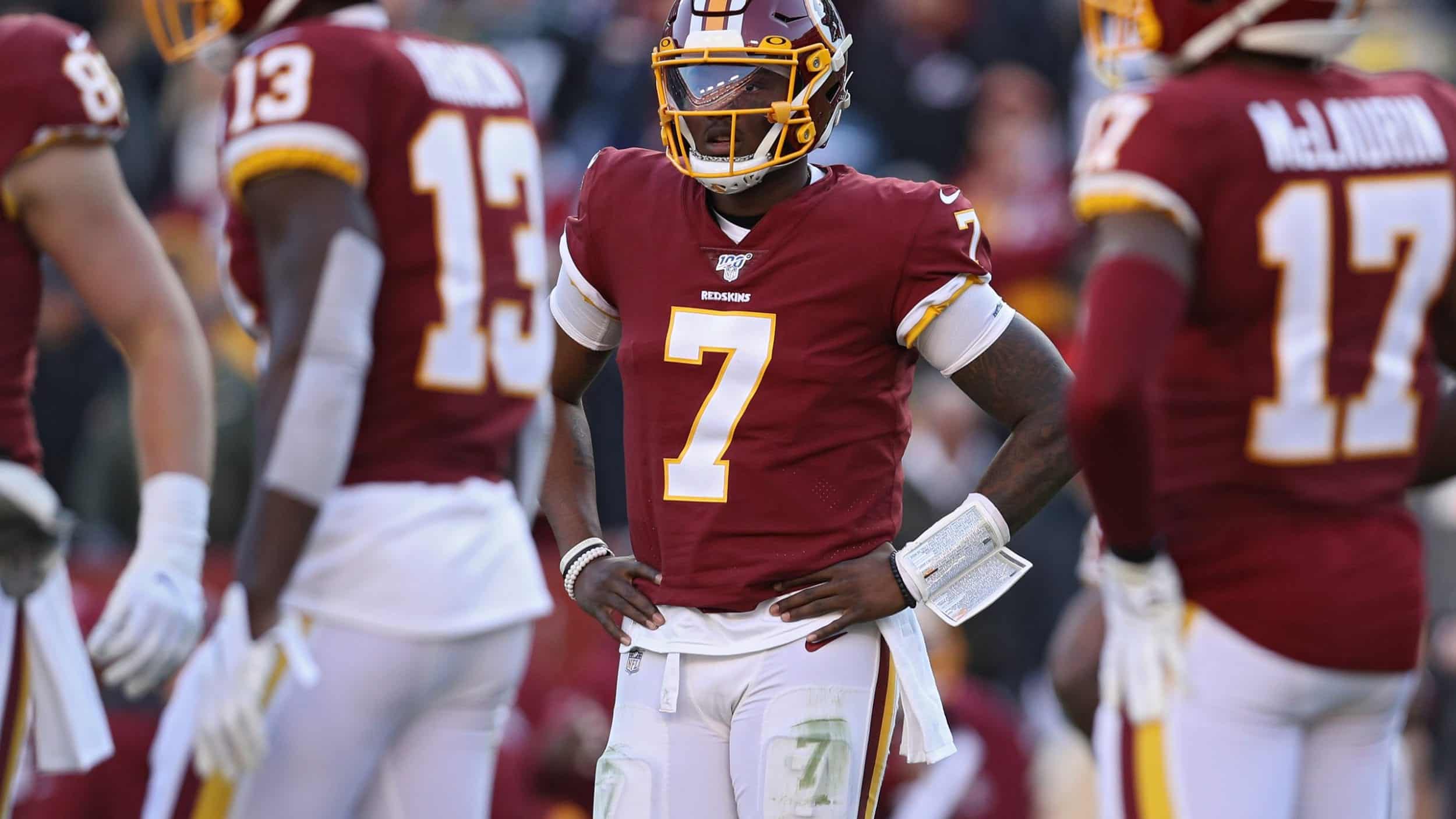 LANDOVER, MARYLAND - DECEMBER 15: Quarterback Dwayne Haskins #7 of the Washington Redskins reacts the Philadelphia Eagles during the third quarter as time expires at FedExField on December 15, 2019 in Landover, Maryland. (Photo by Patrick Smith/Getty Images)

While watching Week 15’s matchup between the Washington Redskins and Philadelphia Eagles, I decided to take a deeper look at rookie quarterback Dwayne Haskins in this weeks’ film breakdown. As a completely unbiased spectator, I found the rookie’s play to be considerably better since the last time I watched him in midseason action.

He’d start slow, no doubt, but the first-year signal-caller has made strides in his development. Whether by nature of increased playing experience or a product of positional coaching, Haskins is a different player than he was in a disastrous Week 4 debut.

Let’s take a look at a few early plays for Haskins and the Redskins’ offense.

Throughout the film breakdown process, I couldn’t help but remember Dwayne Haskins’ college days, and how his performance in Week 15 was the first time his stat line would resemble anything from his time at Ohio State. Take the Rose Bowl, for instance. In that game, Haskins completed 67.6% of his passes for 251 yards and three touchdowns. Following the contest, CBS Sports writer, Tom Fornelli, stated that Haskins would be the first quarterback drafted if he were to leave school.

Not only was Haskins not the first quarterback to hear his name called in the 2019 NFL draft but supposed late first-rounder, Daniel Jones, received the call nine spots earlier. However, having played in seven games before this last Sunday, Haskins had not given any franchise a reason to lament, allowing him to slide to the 15th selection.

Of course, this past Sunday’s production could spark a trend in that direction. Against the Eagles, Haskins completed 67.9% of his passes for 261 yards and two touchdowns. These numbers were a better representation of Haskins, the college quarterback.

For more clarity regarding his statistical jump, I looked to Pro Football Network’s Offensive Share Metric (OSM). PFN’s OSM looks at an individual’s responsibility to his offense like no other piece of analytical data. If Haskins’ production were, for example, a product of his receivers gaining yards after the catch, his Week 15 OSM grade would best exemplify that.

How did Haskins handle what only he could control?

Haskins’ grade of 27.18 was the highest PFN OSM grade of his rookie season, and it wasn’t even close. His Week 15 grade was also good for the 10th highest of the weekend, making it the first time in 2019 where he’d rank better than 17th overall. Hell, in six of the eight games he’s played, Haskins has scored in the bottom 12 of the league. Therefore, Haskins’ most recent outing was worth the extra look.

So what else is driving Haskins’ expanded role and latest increase in OSM? For starters, Haskins has become more confident, and in turn, more aggressive. In Week 15, Haskins ranked 11th in aggressiveness percentage (17.9) and still managed to rank in the top ten for completion percentage above expectation.

Like dominos, the other measurables followed suit. According to NFL’s Next Gen Stats, Haskins would rank 8th in average air yard differential and 6th in passer rating (121.3). For perspective, only Dak Prescott, Jameis Winston, Lamar Jackson, Russell Wilson, and Drew Brees were given a higher quarterback rating in Week 15.

With the Eagles pass defense ranked 18th, I questioned if Haskins’ production was more indicative of his opponent’s recent struggles. However, Haskins has played in eight games: four against top 20 pass defenses, and four against the bottom 12.

Against the former, Haskins completed 60% (66 of 110) of his passes for 766 yards (6.96 yds/pass), four touchdowns, and an interception. Coincidentally, against the bottom 12 Haskins’ numbers were worse, completing 52.6% (41 of 78) for 466 yards, one touchdown, and six interceptions. With that said, there’s no direct correlation between Haskins’ success and playing an inferior opponent.

The only statistical pattern I uncovered in this weeks’ film breakdown of Dwayne Haskins was one of consistent progression every week. If you remove the first two games (Weeks 4 and 8) that Haskins played in and strictly dissected his numbers from Weeks 9-12 compared to Weeks 13-15, you’ll find steady improvement.

The proof is in the pudding, folks. The Redskins’ rookie passer is ascending, albeit at a slow but steady pace. As he’s become more comfortable in an NFL offense, he’s displayed more patience, made safer decisions, and is playing more aggressively as his confidence grows.

Look for more of the same from Haskins’ Week 15 performance as he proceeds to make his case as 2019’s top drafted quarterback.