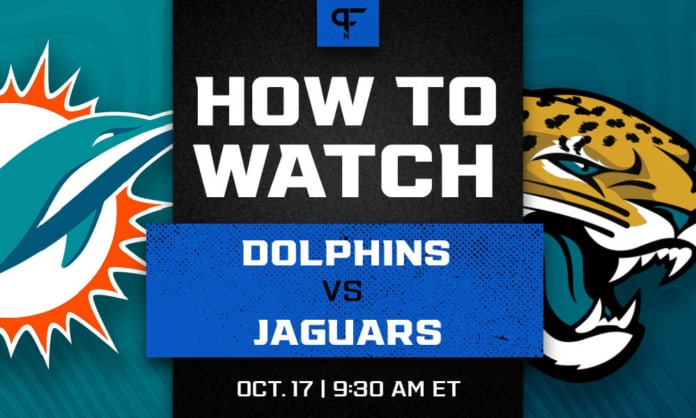 Dolphins vs. Jaguars prediction, pick, odds, and how to watch the London NFL game in Week 6

What are the Dolphins vs. Jaguars odds and prediction, what channel is the game on, and how can you stream this Week 6 matchup?

Sunday’s Miami Dolphins vs. Jacksonville Jaguars game will take place in London as part of the NFL’s International Series. Both teams come limping into this game. The Dolphins have lost four in a row after a Week 1 win over New England, while the Jaguars have lost 20 games in a row since their Week 1 victory in 2020. Let’s take a look at the current NFL odds, the TV channel, how to live stream this Week 6 matchup, and a Dolphins vs. Jaguars prediction.

The Dolphins and Jaguars both enter this game with sub-.500 records against the spread. That said, the Jaguars have failed to cover in each of their last five October games. However, history favors Jacksonville in this series. The underdog has covered in each of their last three meetings dating back to 2015.

The game total of 45.5 is in the middle of the pack in terms of the Week 6 slate. Of course, when you have two bad offenses and two bad defenses meeting, oddsmakers tend to skew more conservatively. Historically, however, these matchups are low-scoring affairs. The under has cashed in seven of these teams’ last eight meetings.

While most people expected the Dolphins to lose last week in Tampa Bay, very few could have expected Miami’s defense to absolutely implode. The Buccaneers ran up 558 yards and 45 points on Miami, highlighting perhaps the most disappointing part of a Dolphins’ season filled with disappointments.

Miami’s defense, a strength in 2020, has regressed mightily in 2021. The unit is allowing 422 yards per game (30th in the NFL and 55 yards per game more than a year ago). Their defensive Expected Points Added is fourth-worst in the NFL, a far cry from the unit’s seventh-best finish in 2020.

The Dolphins’ offense hopes to get a shot in the arm this week in London with the expected return of quarterback Tua Tagovailoa. While Tagovailoa didn’t set the world on fire in Week 1, watching Jacoby Brissett play football for the past four weeks has resulted in a renewed appreciation for the young QB. The Dolphins are also hopeful DeVante Parker can return after missing last week’s game with a hamstring injury.

The best news for the Dolphins, of course, is their Week 6 opponent. The Jaguars come into this week’s game having not won a regular-season football game since September 13, 2020 — over 390 days ago. Additionally, the team looked as bad as they have all year in their 18-point loss to Tennessee last week. Considering the circus surrounding head coach Urban Meyer the last 10 days, their poor performance in Week 5 should not have come as a surprise.

The first overall pick of the 2021 NFL Draft, Trevor Lawrence, has not come in and instantly transformed Jacksonville’s offense — an expectation that was never realistic. Lawrence enters this week 30th in the NFL in passer rating (71.3) and EPA/play (-0.042), and 28th in PFN’s passing Offensive Value Metric (20.74).

If there was ever a “get right” game for Miami’s defense, this is the one. And, frankly, it needs to be if Brian Flores doesn’t want his seat to get hot on the plane ride home from London. The offense should not have to do too much to win this game. As long as Miami protects the football and can string together at least a couple of scoring drives — something surprisingly difficult for the Dolphins this year — expect the Dolphins to leave the UK with their second win of 2021.

How to watch and listen to Dolphins vs. Jaguars this week