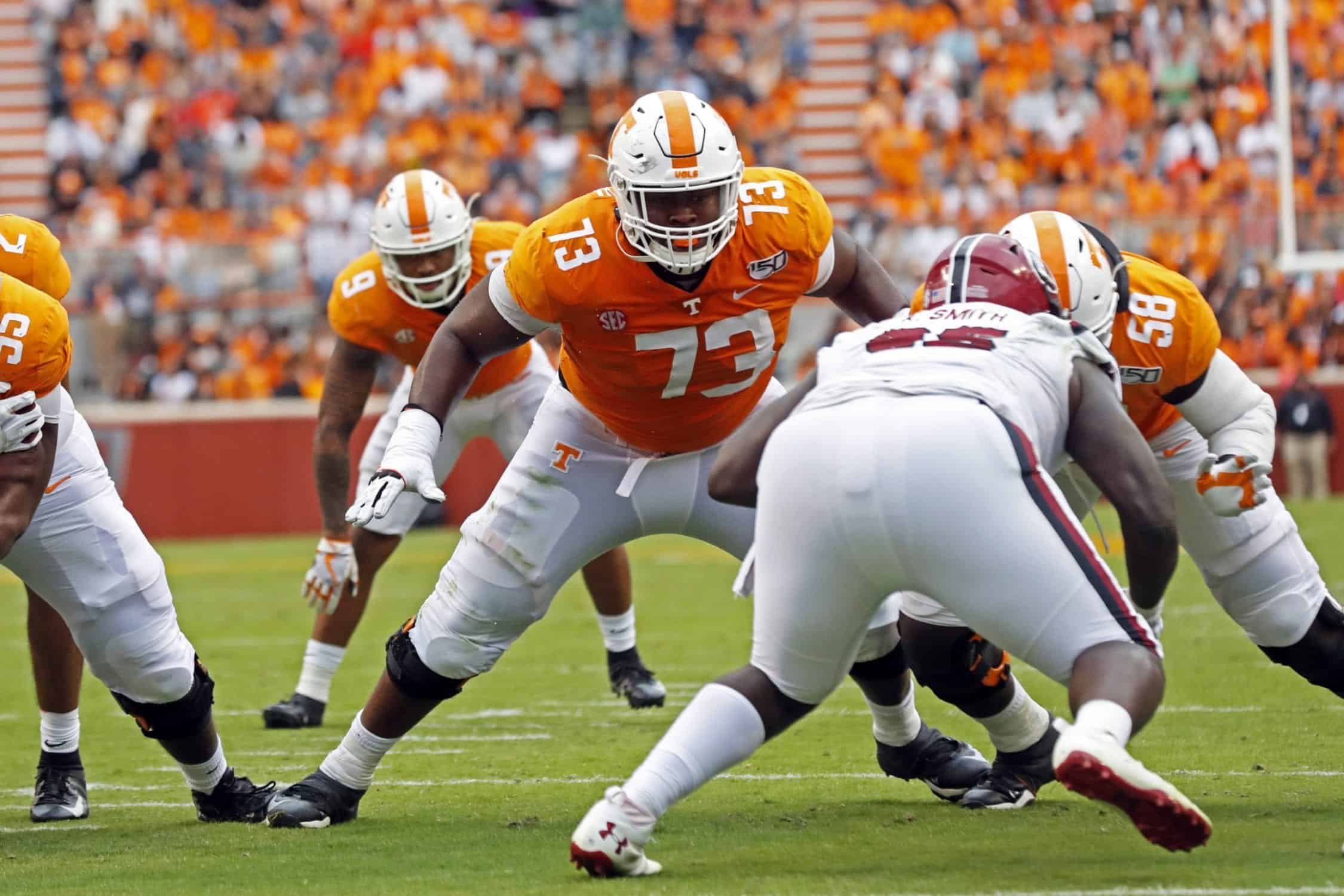 Photo Credit: Wade Payne/Associated Press
What's in this article? Click to show
With Hawkeyes connections now running through Miami, keep an eye on Tyler Linderbaum
Clemson OT Jackson Carman can slide in at either tackle position on Miami’s offensive line
Tennessee’s Trey Smith is a mauler and most importantly, is versatile

The Miami Dolphins were dreadful on the offensive line this past season and took steps to upgrade that this offseason. With free agency in the rearview mirror and with the line still likely needing a few more upgrades, the Dolphins likely already have their eyes set on the 2021 NFL Draft. But first, they’ll get to see how their new additions perform this season.

Miami signed former Patriots’ lineman Ted Karras to help strengthen the interior of their offensive line. Karras is entering his fifth season in the NFL after starting every game during the 2019 season at center for New England. As the favorite to open the season as the starting center, head coach Brian Flores and his staff are hoping that he can be the glue that keeps the line together.

Below, I look at three other potential fits in the 2021 NFL Draft for this Miami offensive line as they look to protect their top 2020 pick and long-term franchise signal-caller Tua Tagovailoa.

With Hawkeyes connections now running through Miami, keep an eye on Tyler Linderbaum

Miami recently hired Steve Ferentz – who played for the Iowa Hawkeyes from 2013-2016 – as a coaching assistant. Steve’s father Kirk, is the head coach at Iowa, and his brother Brian has been the Hawkeyes’ offensive coordinator since 2017. Additionally, Brian was on the Patriots staff from 2008-2011.

During the NFL Draft process, we like to make connections and it’s not hard to put it all together with the Hawkeyes connections now in Miami. As such, they could very well have interest in Iowa center, Tyler Linderbaum.

Linderbaum will be one of the more fascinating case studies as we navigate the college football season and head into the 2021 NFL Draft. The 6’3″, 288-pounder arrived at Iowa as a defensive lineman but moved to offense following the 2018 season. In 2019, he started all 13 games at the pivot position and showed himself to be a natural and absolute force up-front for the Hawkeyes.

In only his brief time as a collegiate center, Linderbaum already has an honorable mention All-Big 12 award to his name and looks to be a budding star on the Hawkeyes offensive line.

The best part is that Linderbaum’s best days are clearly ahead of him, and the sky is the limit for his draft stock. If he decides to declare following his redshirt-sophomore campaign, he will likely to be one of the first interior linemen off the board.

In Andrew DiCecco’s first two-round 2021 NFL Mock Draft, he pegged the Dolphins to select Alabama left tackle Alex Leatherwood to upgrade their offensive line. While that selection makes a ton of sense for Miami, there will be a plethora of talented, offensive tackles to choose from in the 2021 NFL Draft.

Trevor Lawrence’s protector at Clemson, Jackson Carman, is one of those players. Carman is a former top recruit for the Tigers, who played as a top reserve in 2018 before starting the entire 2019 on Lawrence’s blindside.

He has exceptionally long arms with the strength and quickness to match. Look below as he easily handles a pass rusher against Texas A&M.

Sophomore OT Jackson Carman will be getting first-round buzz this summer pic.twitter.com/7aUxl8JwS9

While Leatherwood and Oregon’s Pewei Sewell are getting a lot of the early buzz, Carman is one of the better left tackles available in the 2021 NFL Draft class. When I watch Carman, I see similarities to the Cleveland Browns’ 2020 first-rounder, Jedrick Wills.

He moves well enough to play on the left side but could play either spot on the Miami offensive line with his size and surprising mobility. As a potential top-20 pick, the Dolphins should heavily consider Carman to upgrade this offensive line with one of their two first-rounders in 2021.

Tennessee’s Trey Smith is a mauler and most importantly, is versatile

As the Dolphins look to beef up their front line for Tagovailoa, they could venture back to the SEC for a big, versatile prospect in Tennessee’s Trey Smith.

The All-SEC performer is a massive individual at 6’6″, 335 pounds that could compete with Hunt, Ereck Flowers, and Solomon Kindley to start at one of the guard spots on the offensive line. He is a people-mover in the run game and shows that raw power to displace the Kentucky defensive linemen below for a Tennessee touchdown.

Smith also offers the length and anchor ability to hold up at the right tackle spot. He even had 19 college starts at left tackle before moving to guard this past season. He is talented enough to stick on the outside and play left or right tackle, but he could be a dominant guard at the next level. The value in Smith’s game lies in his versatility and experience at the college level.

A former five-star recruit, according to Rivals.com, Smith has lived up to that billing and then some for the Volunteers. He would have competed as a late first-round pick in the 2020 NFL Draft but returned to college for his senior season at Tennessee.

If he can stay healthy and continue his stellar play in the SEC, he will become a top-25 pick, possibly as an upgrade for the Dolphins’ offensive line in 2021.