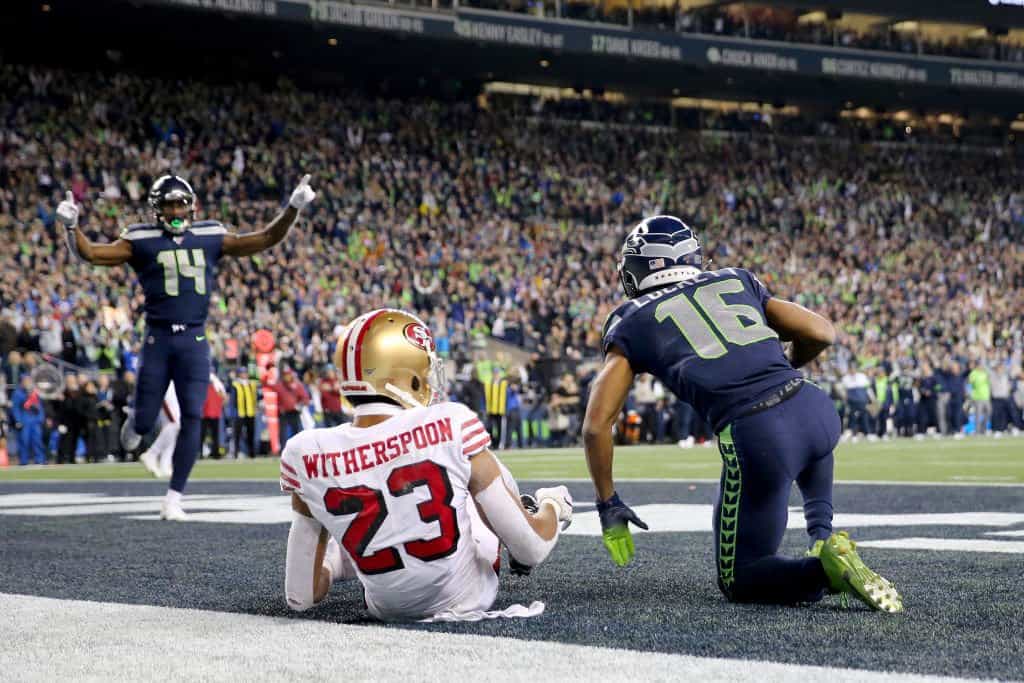 SEATTLE, WASHINGTON - DECEMBER 29: Wide receiver D.K. Metcalf #14 of the Seattle Seahawks celebrates a touchdown by teammate wide receiver Tyler Lockett #16 against cornerback Ahkello Witherspoon #23 of the San Francisco 49ers during the third quarter of the game at CenturyLink Field on December 29, 2019 in Seattle, Washington. (Photo by Abbie Parr/Getty Images)
What's in this article? Click to show
DK Metcalf and Tyler Lockett were both fantasy superstars in Week 1
Metcalf and Lockett’s Consistency Score
DK Metcalf and Tyler Lockett’s xFP and Fantasy Points Differential
Rest of season outlook for Metcalf and Lockett

With the “Let Russ Cook” movement actually coming to fruition in Seattle’s Week 1 victory over the Atlanta Falcons, both DK Metcalf and Tyler Lockett finished as high-end WR2’s in fantasy football. Metcalf (WR13 in PPR leagues) finished seven spots above Lockett (WR20) in Week 1, but has he jumped ahead of Lockett as the WR1 in Seattle?

In this article, we’ll look at Metcalf and Lockett’s Week 1 performances in both fantasy football and our Pro Football Network analytics. While stats are ultimately what fantasy footballers care about, taking a deeper look at usage and analytics can give us a better understanding of what’s likely to translate all season. Let’s dive in!

Seahawks quarterback Russell Wilson showed why he’s a legitimate MVP candidate this season, completing 31 of 35 passing attempts for 322 yards and four touchdowns. Wide receivers DK Metcalf and Tyler Lockett, who each scored over 17 PPR fantasy points, were the main beneficiaries of Seattle’s Week 1 decision to “air it out”.

Metcalf (61 snaps, 98%) held the slight playing-time edge over Lockett (58 snaps, 94%) in Week 1, but both wide receivers are full-time players on an ascending passing offense. With Seattle finishing with only 20 rushing attempts despite a 14-3 edge early in the game, head coach Pete Carroll and offensive coordinator Brian Schottenheimer might finally let Wilson take control of this offense.

While the Week 1 game plan might have been due to Atlanta’s struggles versus the pass, the fact that Seattle kept passing while up double-digits is a great sign for both Metcalf and Lockett’s fantasy futures. As noted by Joe Dolan on his Fantasy Feast podcast with Ross Tucker, Seattle’s 20 total rushing attempts in Week 1 was the lowest total of any double-digit victory in Carroll’s 11-year Seattle career.

In Week 1, Metcalf and Lockett both finished as Top 30 wide receivers in Caldwell’s Consistency Score. Lockett finished as WR22 with a 4.50 CS, while Metcalf wasn’t far behind with a WR30 (4.00 CS) finish in Week 1. I know one week of action isn’t a robust sample size, but if Seattle continues to air it out, both Metcalf and Lockett should see their CS scores rise as the season progresses.

By Week 5, CS will have the data it needs for the 2020 regular season to have statistically-significant cohorts not involving the tail end of 2019 — stay tuned!

As you can see from the data above, both Seahawks wide receivers outplayed their Expected Fantasy Points. DK Metcalf and Tyler Lockett were each expected to score 13.8 fantasy points from their 8 targets, but both massively outproduced those expectations in Week 1.

Metcalf scored 19.5 fantasy points (41% FPD) after hauling in four receptions, 95 yards, and one touchdown reception. Lockett, on the other hand, remained one of the most efficient players in all of football. Lockett caught all eight of his targets for 92 yards, finishing Week 1 with 17.2 fantasy points (24% FPD).

Rest of season outlook for Metcalf and Lockett

It’s hard to project too far into the season with the volatility of the NFL game itself, without the benefit of knowing which teams will stay healthy over the course of the season, but the New England Patriots coming to the 13th man at CenturyLink Field will be an intriguing litmus test. On paper, the Patriots look to be the vaunted defense that they were in 2019, and historically Belichick has been able to get the most out of this group.

The Patriots defense is ranked in the top ten in both the pass and the run according to Andrew Jordan’s defense/special teams rankings, with a bit of salt needed for that pedestal as those numbers reflect playing a below-average offense in the Miami Dolphins. At any rate, the Patriots defense will almost assuredly outperform the defense of the Atlanta Falcons, so Week 2 is a tremendous barometer to assess this Seahawks offense.

Both Metcalf and Lockett were targeted eight times in Week 1, which is more than enough to remain fantasy-relevant. As noted above, Lockett has always been a highly-efficient player while Metcalf can score from anywhere on the field. With Seattle expected to “Let Russ Cook” this season, I’m buying both wide receivers as fantasy league-winners moving forward.