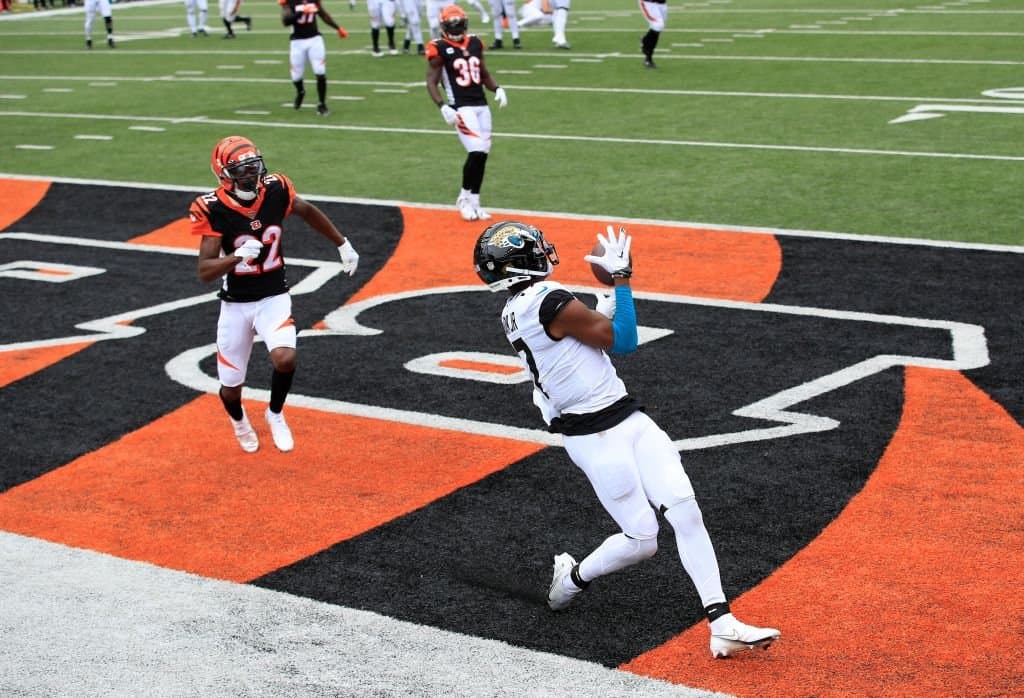 CINCINNATI, OHIO - OCTOBER 04: DJ Chark Jr #17 of the Jacksonville Jaguars catches a pass for a touchdown against at the Cincinnati Bengals Paul Brown Stadium on October 04, 2020 in Cincinnati, Ohio. (Photo by Andy Lyons/Getty Images)
What's in this article? Click to show
DJ Chark is currently questionable after missing two practices and being a limited participant on Friday
Without DJ Chark in the lineup, the Jaguars offense has struggled
Is DJ Chark’s fantasy value enough to risk starting him in Week 6 against the Detroit Lions?
Want more fantasy football analysis and news?

Coming into the week nursing another injury, DJ Chark’s fantasy value has come into question with the star wide receiver sporting the dreadful questionable tag. Should fantasy football managers get a backup plan ready if DJ Chark won’t suit up, or will he be safe to leave in lineups? We have seen how important he is to the success of the Jacksonville Jaguars’ offense, and when on the field, is a weekly must start.

Update: This article was originally published on October 16. On October 18, Tom Pelissero reported that Chark will be ACTIVE for today’s game.

The Jaguars injury report on Thursday noted one key player as a non-participant in practice for the second day in a row: DJ Chark. This is not the first time we have seen his name pop-up on the injury report, unfortunately.

DJ Chark missed the team’s Week 3 loss to the Dolphins with chest and back injuries. He was able to come back and play the next week and caught eight passes for 95 yards and two touchdowns in the Week 4 loss to the Bengals. In Week 5, Chark caught three of his four targets for 16 yards. He played 50 of 75 offensive snaps Sunday before departing with an ankle issue.

On Friday, DJ Chark was able to get in a limited practice, which means he has a chance to play on Sunday. Had he missed Friday’s practice, this article likely would not have been written because the chances of him playing would have been slim to none.

The good news is that it will now likely be a game-time decision and fantasy managers everywhere are hoping DJ Chark takes the field because, on paper, this is an excellent matchup against the Detroit Lions defense.

In fact, ESPN’s Adam Schefter has reported that Chark “is likely to play against the Lions, but Jacksonville first wants him to test him pregame before making any final decisions, per source.”

Without DJ Chark in the lineup, the Jaguars offense has struggled

The Jaguars’ offensive success has been predicated on their involvement of Chark and how often quarterback Gardner Minshew can get him the football.

Week 3 and Week 5 are the prime examples of what he means to their offense. In those weeks, they scored only 13 and 14 points. Chark missed Week 3 against the Miami Dolphins and only saw three targets last week. In each of those games, not only was the scoring down, but so were their average plays per drive, time of possession, rushing yards, and committed more turnovers.

For the other three games in which Chark was avaliable and saw usage, the Jaguars scored 27, 30, and 25 points in each contest.

Through five games, Chark has started in four games and leads the team in yards per reception (12.2) while also tying for the lead in touchdown receptions (3). Chark is second on the team in receiving yards (220) and receptions (18) despite being the sixth-most targeted player on the offense.

Is DJ Chark’s fantasy value enough to risk starting him in Week 6 against the Detroit Lions?

The fact that Chark practiced as a limited participant on Friday is a positive sign. However, there is always the risk that he can easily re-aggravate it during the game or even warmups.

We know how special of a talent he is and under any normal circumstances without any injuries to worry about, Chark would be a mid-tier WR2. Knowing that he could miss a favorable matchup is disappointing. If he is active, DJ Chark’s fantasy value will be a risky low-end WR3 knowing that he could be pulled at any moment.

If he can’t play, Keelan Cole (14.3% rostered) and Laviska Shenault (41.4% rostered) will soak up most of Minshew’s targets, and both will be in the WR3 range against the Lions in Week 6. Collin Johnson, a rookie who replaced Chark and caught three passes for 30 yards and a TD against the Texans, could also be in line for more snaps but wouldn’t be started in anything but a flier in DFS.