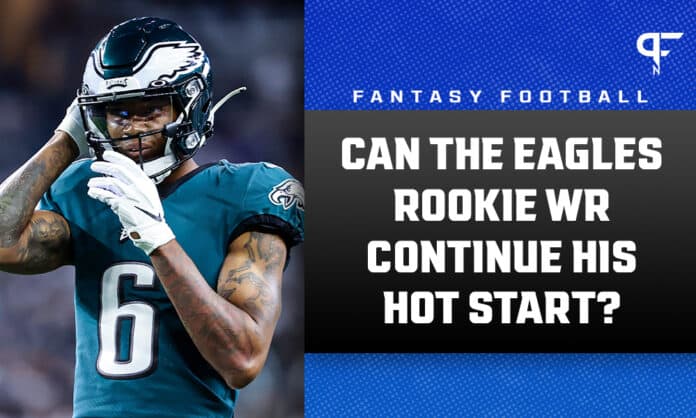 DeVonta Smith is one of the best rookies in fantasy and has been a must-start WR the past two weeks. Is he an automatic starter in Week 6?

Five wideouts went in the first round of the 2021 NFL Draft. Ja’Marr Chase leads this group as the WR8 through five games. DeVonta Smith, meanwhile, is No. 2 as the WR32, and he’s coming on strong. Will Smith keep producing for fantasy football managers in Week 6 against the Tampa Bay Buccaneers?

How important is DeVonta Smith to the Eagles?

Smith’s impressive 6-71-1 NFL debut rewarded managers who drafted him at his preseason WR31 ADP. Philadelphia’s No. 10 overall pick joined a team coming off its second-worst season in more than two decades. Erratic quarterbacking and a receiving corps in transition left the team without a true No. 1 wideout.

Smith filled that vacuum immediately, and although he stumbled in Weeks 2 (2-16-0) and 3 (3-28-0), his target share remained solid. There was little doubt that Smith was a buy-low candidate in an offense desperate for playmakers.

The last two weeks he has paced Philadelphia receivers with 19.2 points and 14.7 points, respectively. He is tied for 17th in the league in targets with 39 — which projects to 133 across a 17-game season. Last year, no fantasy WR with 125+ targets finished outside the top 25 in fantasy points. As long as Smith’s usage continues (and there’s no sign it will subside), he remains a buy-low target.

Should you start Smith in Week 6?

On Thursday Night Football, Smith will face a Tampa Bay defense that’s been stout against the run but anemic against the pass, thanks in large part to a rash of injuries to their secondary. They are yielding the third-most passing touchdowns in the NFL (13) and the fourth-highest completion rate (72.9%). Additionally, the Buccaneers are tied for the league-worst in passing first downs allowed (81).

The Bucs can be worn down through the air. That is Philadelphia’s best path to victory, as Tampa Bay’s run defense is arguably the league’s best (yielding only 2.9 yards per carry). As Pro Football Network fantasy analyst Tommy Garrett shared Monday, Tampa Bay’s opponents have chosen to pass the ball on nearly 72% of plays, which is easily the highest mark in the league.

As Jalen Hurts’ top target, Smith is in a prime breakout position. His No. 25 consensus expert ranking this week is — if anything — a bit conservative. I would start Smith as a top-18 receiver with room to pop if things break right. Congratulations on drafting (or trading for) this Week 6 bargain.