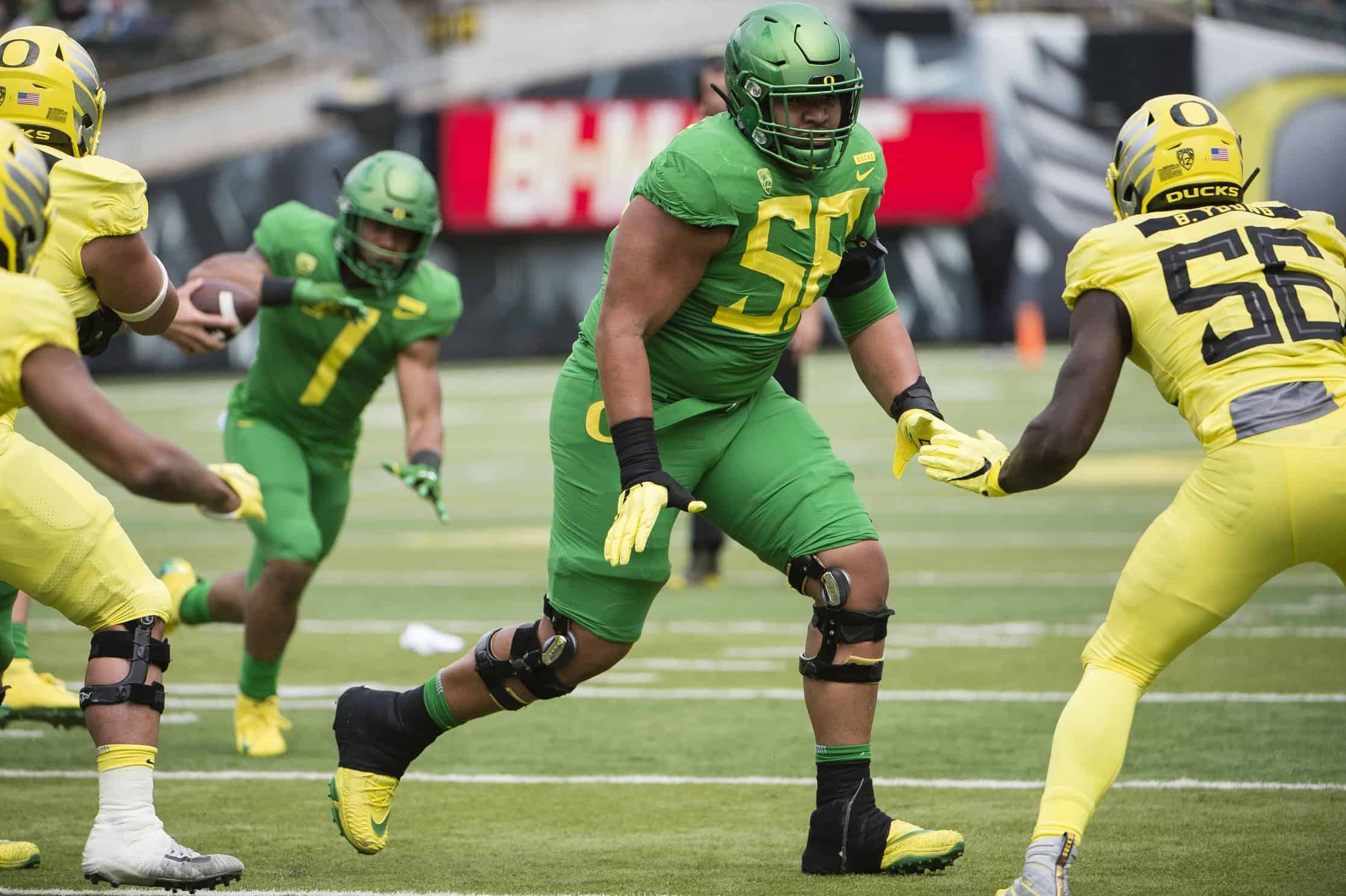 It’s the Motor City Dan Campbell era in Detroit. And with any luck, he can kick this rebuild into the next gear. Detroit has long been a den of suffering and defeat, but can the tides turn for the Lions in the 2021 NFL Draft? Here are the picks the Lions made in 2021, along with grades and analysis for each draft selection.

Who did the Lions draft on Day 1?

The Lions had an interesting decision to make with the seventh overall pick in the 2021 NFL Draft.

Ohio State quarterback Justin Fields fell to Detroit’s selection, giving them an opportunity to select a high-upside passer. Instead, the Lions decided to bolster their offensive line by selecting Sewell.

Ultimately, selecting a potential franchise quarterback without having to trade up might have been the better long-term option. Nevertheless, Sewell is the class’ bonafide top tackle prospect. He’s athletic, instinctive, powerful, and he’s only 20 years old. With no clear-cut starter at right tackle, the Lions now have one of the better tackle duos in the league.

Spending early capital on the line is never a bad idea. Still, given that the Lions could have kicked off their rebuild with a quarterback, their grade gets bumped down just a hair.

The Lions need to upgrade the trenches. Even after re-signing Romeo Okwara and trading for Michael Brockers, that remained clear into the draft. Levi Onwuzurike is a high-level prospect with the explosiveness and flexibility to be a threat as a pass rusher. He also has the trademark length and reach that the Lions value heavily on the interior. The value is solid here, and it addresses an important position.

It’s never a bad idea to build a strong rotation of interior linemen, and that’s what the Lions are doing. After taking Onwuzurike in Round 2, they swiped Alim McNeill in Round 3. McNeill is a stout player and a stellar athlete. He provides a high-end run defender on Day 1, and he has the upside to be a devastating pass rusher. The Lions could have addressed wide receiver here, but McNeill is excellent value on the board.

As a pure value pick, this might be one of the draft’s best selections thus far. Ifeatu Melifonwu, as a cornerback prospect, is a borderline first-round talent. It’s unclear why he fell so far down the board. He’s the rare cornerback over 6-foot-2 who has elite athleticism and change-of-direction skills. Furthermore, he’s a quick processor, versatile, and very physical at the contact point. Melifonwu gives the Lions valuable depth at cornerback, and he can be a high-level starter.

Alright, it’s over. The Lions won the draft. Amon-Ra St. Brown was a top-50 prospect on my board. He’s explosive, smart, and underrated in his run-after-catch ability. None of this even takes his contested catch ability into account. He can separate downfield with twitch, but when he doesn’t, he has the alpha mentality, body control, and hand strength to come away successful. The Lions continue to score tremendous value.

The Lions could have gone with Jabril Cox here, who’s a higher-ranked player on my board. That said, Derrick Barnes is an elite athlete, with a 4.57 40-yard dash and a 37-inch vertical at 6-foot-0, 238 pounds. His athletic upside makes him very much worth the price, and he can be a steady player against the run on day one.

The Lions had a strong draft, but this pick is a little underwhelming. The Lions already have a crowded RB rotation, and Jermar Jefferson is small and not a great athlete. There doesn’t seem to be much upside here, but the risks involved with a late seventh-round pick are very low.

The Lions knocked this mock draft out of the park. Six of their seven selections received A’s in some capacity. Ifeatu Melifonwu and Amon-Ra St. Brown were unfathomable value deals in the Round 3-4 range, and on Days 1 and 2, they locked down their trenches with Penei Sewell, Levi Onwuzurike, and Alim McNeil. The Lions attained optimal value at almost every juncture, earning them one of the best overall grades across the league.

The Ravens nailed every pick on Day 3, which boosted their final grade. The selections of Rashod Bateman and Ben Cleveland were stellar moves in the early rounds. The more questionable ventures were Brandon Stephens and Odafe Oweh. The gamble on Oweh in Round 1 is understandable, as he has some of the best athletic traits on the market. However, he has a lot of room for development. The Ravens did very well, but a few of their picks are more based on projection.

Team needs for Detroit coming into the NFL Draft

As a team beginning a rebuild, there are holes all over the roster.

The Lions signed a few wide receivers in free agency, among them Tyrell Williams and Breshad Perriman. Regardless, the cupboard is still largely bare. No matter who the Lions move forward with at quarterback, they need weapons to help their quarterback thrive.

Linebacker has long been a need for the Detroit Lions, going back past the days of DeAndre Levy. In a deep class that projects to have lots of talent on Day 2, this is a prime opportunity for Detroit to add some high-level developmental upside to their linebacker room.

The Lions might be content with trotting out Jared Goff at quarterback for at least this year. The fact of the matter is, they made a downward move transitioning from Matthew Stafford to Goff. If they can add a QB, whether in Round 1 or later, they should do so.

The Lions did draft Jeffrey Okudah in the top five last year, and Okudah still has plenty of potential. However, the 2020 first-round selection could use some help. Amani Oruwariye and Quinton Dunbar might not be long-term starters, and there’s also a hole in the slot.

The Lions’ best player at safety is Tracy Walker. Walker has shown flashes in the free safety role, but he’s not a high-level player, and he’s set to be a free agent in 2022. Adding a quality safety could also help solidify the secondary and catalyze the development of the young CBs.