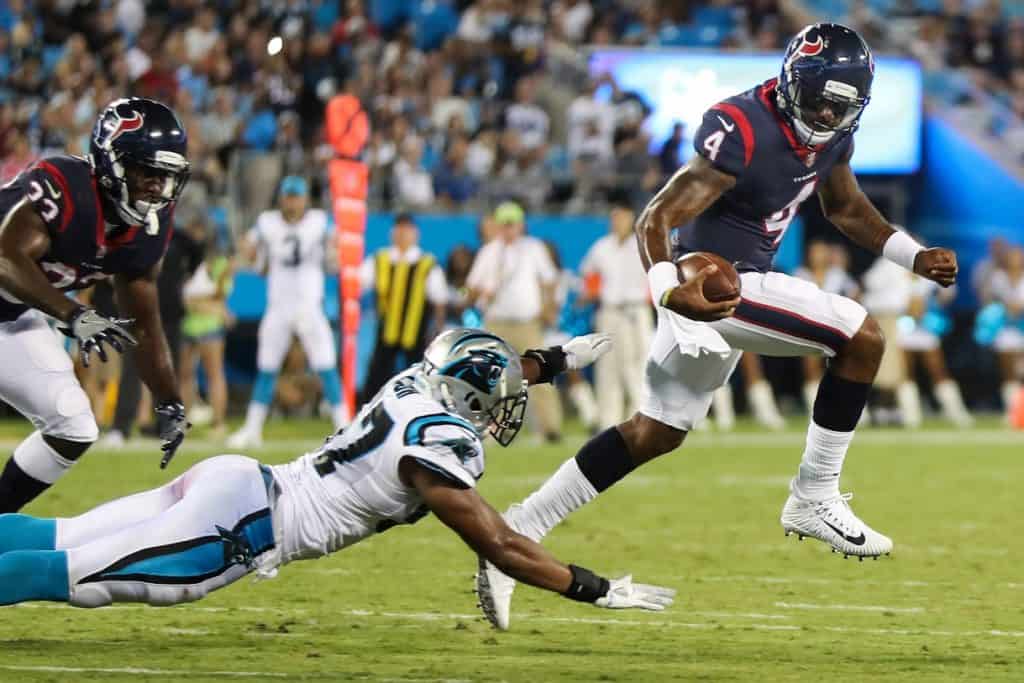 Aug 9, 2017; Charlotte, NC, USA; Houston Texans quarterback Deshaun Watson (4) eludes Carolina Panthers linebacker Jeremy Cash (57) during the second quarter at Bank of America Stadium. Mandatory Credit: Jim Dedmon-USA TODAY Sports
What's in this article? Click to show
Recent reports suggest there is a two-team race for Texans QB Deshaun Watson
The Carolina Panthers have been firmly in the mix for the Texans QB since February
Few teams can match the potential trade capital of the Miami Dolphins if they pursue Deshaun Watson
While the cost to acquire Deshaun Watson will be high, the production he brings is immense
Want more NFL news and analysis?

In what seems to be a daily occurrence, we hear NFL rumors surrounding the everchanging situation between Houston Texans QB Deshaun Watson and potential trade destinations. However, recent reports suggest league insiders and NFL media are split between the Miami Dolphins and Carolina Panthers as the eventual landing spot for Deshaun Watson.

As we all know, there is a Texas-sized line drawn in the sand, and neither camp seems willing to budge. While Deshaun Watson is adamant he will sit out the 2021 season if not traded, the Texans seem just as dug in on not waiting to ship off an MVP-level talent. After all, both sides did agree to a four-year, $156 million contract barely even a year ago.

What no one seems to be confident on, though, is what the outcome will be once the dust settles — not even those who are the most plugged into the inner workings of the NFL.

According to PFN NFL Insider Tony Pauline, media members and league insiders are leaning in different directions on what jersey Deshaun Watson will be wearing in 2021.

Pauline is hearing that NFL media members believe that Texans QB Deshaun Watson will end up with the Miami Dolphins. However, NFL league insiders continue to tell him the Carolina Panthers want Deshaun Watson badly and are willing to pay the most to get him.

There is no reason to believe anything is “imminent,” according to Pauline

Tony Pauline does not believe anything will happen soon regarding any Deshaun Watson movement.

“While there are rumors abound, there’s no reason to believe anything is imminent. Both sides are entrenched as of now; Watson wants out of Houston but the Texans are hellbent on keeping the quarterback. It may come down to whoever blinks first.”

Given the large-scale implications of a Deshaun Watson trade, it should come as no surprise this process will be drawn out. The recent allegations levied against Watson in recent days are also adding to complications.

“Now, the big noise I have heard over the past 24 hours comes from the Carolina Panthers. I spoke with someone last night, and we spoke about Deshaun Watson. This is a person in the know, and they told me that the Panthers will do anything they can to acquire Watson, and they will pay any price to acquire Deshaun Watson.”

Panthers owner David Tepper’s willingness to make big moves is cited as one reason Carolina needs to be viewed as a serious contender. When trying to land his future head coach, Tepper made Matt Rhule an “offer he couldn’t refuse.” Could this be the same mindset the Panthers have towards Deshaun Watson?

While likely to be aggressive, the Panthers will not go overboard on their approach and hamper their future.

“I was told that they will pay any price, according to Pauline, that doesn’t mean they are going to give away the next six first-round picks. So, you can read into it what you want, but don’t go overly crazy with it.”

As late as yesterday, March 17, Pauline said people in the league were telling him the Panthers are willing to pay the most to acquire Watson.

GM Chris Grier and HC Brian Flores have put the Miami Dolphins in an incredible spot for the future. In almost one year, they managed to rebuild not only the roster but the culture. Also, the Dolphins have room to maneuver around the salary cap and have multiple first-round picks in 2021.

The draft picks are something few teams can match if the Dolphins decide to pursue Deshaun Watson seriously. Some media members believe it will happen.

Entering the draft with the third overall pick from the Laremy Tunsil trade with Houston and their original 18th pick, the Dolphins have the base for a massive package.

No matter how much fans love Tua Tagovailoa, if the Dolphins want Watson as their QB, they will get him. A point that Armando Salguero of the Herald brings up as well on the podcast, telling his audience “the Miami Dolphins want Deshaun Watson. Sorry, Tua Army. But they do.”

While the cost to acquire Deshaun Watson will be high, the production he brings is immense

Whether or not the Dolphins, Panthers, or another team like the Denver Broncos can complete a trade for Deshaun Watson, there is no denying the incredible talent Watson brings.

Since 2018, Watson has thrown for 12,840 yards (sixth) and 85 touchdowns (seventh), despite taking more hits than any QB since entering the league. He is also a massive threat on the ground, helping to open up any offense. His 1,408 rushing yards (third) and 15 touchdowns (fourth) only add to what will assuredly be an enormous return to a rebuilding Houston Texans team.

In this article:Deshaun Watson, Featured