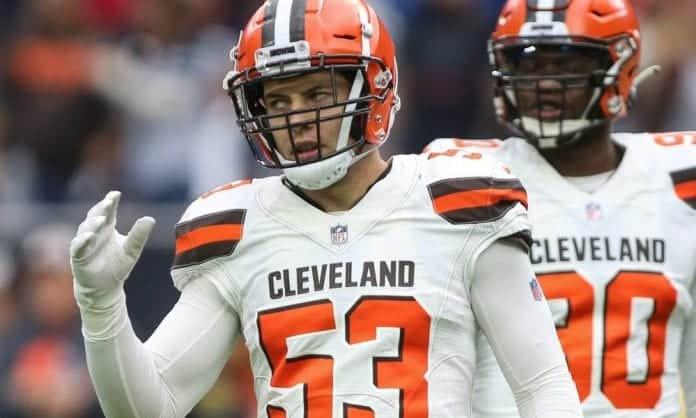 With news that Cleveland Browns linebacker Joe Schobert has yet to be contacted by the team for a new deal, Pro Football Network's NFL Insider Benjamin Allbright is reporting that the Denver Broncos are interested in signing the talented player.

It was a difficult week for the Cleveland Browns. They lost to the Arizona Cardinals by double digits and are now hanging on to their playoff hopes by a thread. On top of the rumored disagreements over head coach Freddie Kitchens, we have now learned that the team might also let one of their best defensive players – Joe Schobert – walk in free agency. Where might he end up? According to Pro Football Network’s NFL Insider Benjamin Allbright, one team (among many) that will be interested in pursuing Schobert is the Denver Broncos.

“If Cleveland lets Joe Schobert walk, which it looks like they will considering they have not even offered him, Denver would be intrigued,” said Allbright.

It has been reported that Schobert has not heard from the Cleveland front office in months about an extension. At the beginning of the season, when it was discussed briefly, he said it was evident the franchise was not serious about re-signing him at that time.

It is difficult to believe that Schobert has yet to receive an offer considering his production this season. He leads the Browns with 116 total tackles, second in the AFC and tenth in the NFL. He has also added a career-high four interceptions.

Schobert hasn’t been shy about his desire to remain a Cleveland Brown. According to his teammates, he is a pillar in the community and a leader in the locker room. When asked this season about his contract and where he stands with the Browns, Schobert had this to say.

“My No. 1 priority is to play the season out and do the best of my abilities and control what I can control,’’ he said to Mary Kay Cabot of Cleveland.com. “I can’t really control what’s going on, what’s being said upstairs to my agent and them. I trust my agent. He’s going to do what’s best for me. I trust the Browns are going to do what’s best for the organization. In my perfect world, yeah, I’d be in Cleveland.”

The Denver Broncos could be a landing spot

There would likely be a number of teams interested in acquiring someone of Schobert’s caliber if he does, in fact, enter free agency. One team for sure though, as Allbright reported, would be the Denver Broncos.

The Broncos talent at the linebacker position the past several years has been impressive. Veteran Von Miller continues to play at an elite level, even if his numbers are down in 2019. And despite rumblings from local media that Miller may want out, Allbright says that is not the case.

They have also been getting good play from Alexander Johnson and Todd Davis. You cannot forget Bradley Chubb, who played only four games this season before going down with an ACL injury. Chubb was coming off a record-setting rookie campaign where he had a Broncos record 12 sacks for a first-year player.

However, Davis is coming up on the last year of his deal and Miller will be 31 during the 2020 season. With early indications that the overall linebacker talent coming into the 2020 NFL Draft is less than spectacular, Denver could look to make a splash with Schobert. At only 26 years old, Schobert could provide a long term plan to have alongside Chubb upon his return.

The price for Schobert

Schobert was a fourth-round pick by the Browns in 2016, taken one spot after the Broncos selected safety Justin Simmons (who we mentioned as a candidate to likely receive the franchise tag). He is currently still on his rookie contract and is making two million dollars this season. It is a small price for the return he has given them.

If Schobert does hit the open market, he will likely be making double digits in his next contract. Every top ten linebacker in the NFL is currently making over 11 million dollars per year. Things became even more promising for Schubert this past week when the Carolina Panthers reached a four-year, $54 million extension with former first-round linebacker Shaq Thompson, including $28 million guaranteed.

When asked about Thompson’s extension, Schobert couldn’t hide his enthusiasm.

“My agent texted me after that contract came out,’’ Schobert said. “Obviously playing as a linebacker in the NFL you like to see stuff like that especially when you’re in that similar situation. But it’s a different scenario, different teams.’’

We will continue to monitor the situation and update as more news becomes available. For more, make sure to follow Ben on Twitter: @AllbrightNFL along with Pro Football Network: @PFN365.