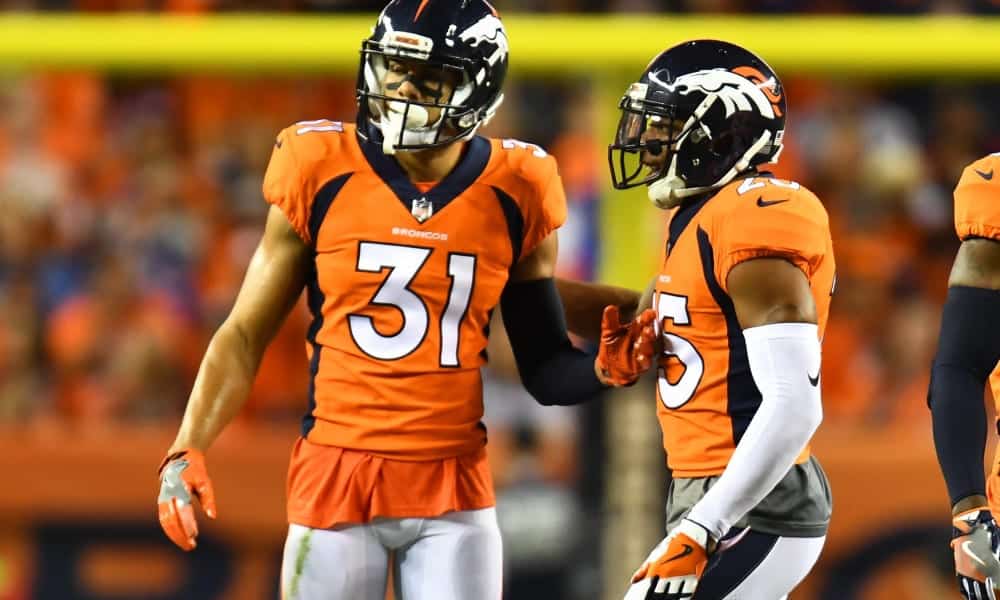 Under first year head coach Vic Fangio, the Denver Broncos will finish with a losing record and will have a top 15 pick in the 2020 NFL Draft. However, there have been quite a few positive developments that offer promise for the future, including the potential of quarterback Drew Lock. As they continue their rebuild in a quest to annually compete for a division title and deep playoff run, the Broncos early free agency strategy is starting to come into focus. This includes what they plan to do with cornerback Chris Harris Jr. and safety Justin Simmons.

Sources have told Pro Football Network Insider Ben Allbright that the current plan is for the Broncos to let Harris Jr. test the market and have his price tag be set by other teams. From there, they will decide whether to match or let him sign with another team.

Sources have also told Allbright that Simmons could get the franchise tag if they can’t work out a long-term deal. There is some framework in place, but there is work that needs to be done. Prior to the 2019 season, the Broncos reached out to his agent with a deal but it was a low offer. Simmons declined, choosing to bet on himself. That chance has paid off – literally – this season.

In 2011, Harris Jr. signed with the Broncos as an undrafted free agent. Since that time, he has made incredible strides and quickly became one of the top cornerbacks in the NFL. He was rewarded in 2014 when the Broncos exercised his option and again in 2018, where he made $8.5 million on the year.

Of course, that level of play is hard to sustain over a long period of time. While Harris Jr. has struggled at times this season, some may point to that he’s learning a new system. Others will also note that he may not be fully recovered from the broken fibula that he sustained in Week 14 of the 2019 season.

Regardless of what the underlying issues are, Harris Jr. seems headed for the free agent market in what is shaping up to be a deep cornerback class with himself, Jimmy Smith, Logan Ryan, Bradley Roby, Marcus Peters and others leading the way. The top cornerbacks are expected to receive lucrative deals, and if teams get into a bidding war for Harris Jr., that could spell bad news for the Broncos if they hope to re-sign him.

Although fans may be highly critical of Harris Jr. this season, receivers throughout the NFL still view him as a tough matchup. Recently, the official Broncos website highlighted Harris Jr. and how he works to perfect his craft. The article included commentary from the likes of T.Y. Hilton, Amari Cooper, Danny Amendola, and others.

“You can tell he watches film,” Colts receiver T.Y. Hilton says. “He’s always there, he’s going to be in your face and it’s going to be a long battle that’s very challenging. … He’s pretty smart, so he pretty much knows when you line up in the slot what routes you like to run, he likes to get up in your face.”

For whatever team gets Harris Jr. – the Broncos or someone else – they’ll be getting someone who puts in the work off the field as he strives to remain one of the best cornerbacks in the league. Based on his work ethic and the comments of others on his team and throughout the league, there’s a good chance Harris Jr. has a bounce-back year in 2020.

Will Justin Simmons get the franchise tag?

The Broncos’ nomination for the 2019 Walter Payton NFL Man of the Year award, Simmons is emerging as a star on and off the field. Through his work in the community, Simmons has contributed more than 3,500 minutes with 20 different local organizations in 2019, working in with various organizations that are related to youth development, hunger relief, health & wellness, youth football, and civic engagement.

On the field in 2019, his resume has been just as impressive. Drafted in 2016, he received occasional snaps as a backup, recording one sack, two interceptions, and 19 tackles. In 2017, he was named a starter and since then, he has continuously improved and hasn’t looked back.

However, it wasn’t until this season where he truly broke out. The safety has four interceptions, the most on the team. He has broken up 14 passes, a career-high. Add 84 total tackles to that stat line and you have a player who has emerged in this new defensive scheme under Fangio.

“Justin’s been a ball-hawk, been able to get the rock for us,” Chris Harris Jr. said to the official Broncos website. “A solid tackler, been able to play the center field as one of the best in the league, playing from sideline to sideline.”

Now, Simmons is looking to secure a long-term deal in Denver. If they can’t work something out, expect the Broncos to apply the franchise tag.

We will continue to monitor the situation and update as more news becomes available. For more, make sure to follow Ben on Twitter: @AllbrightNFL, along with Pro Football Network: @PFN365.