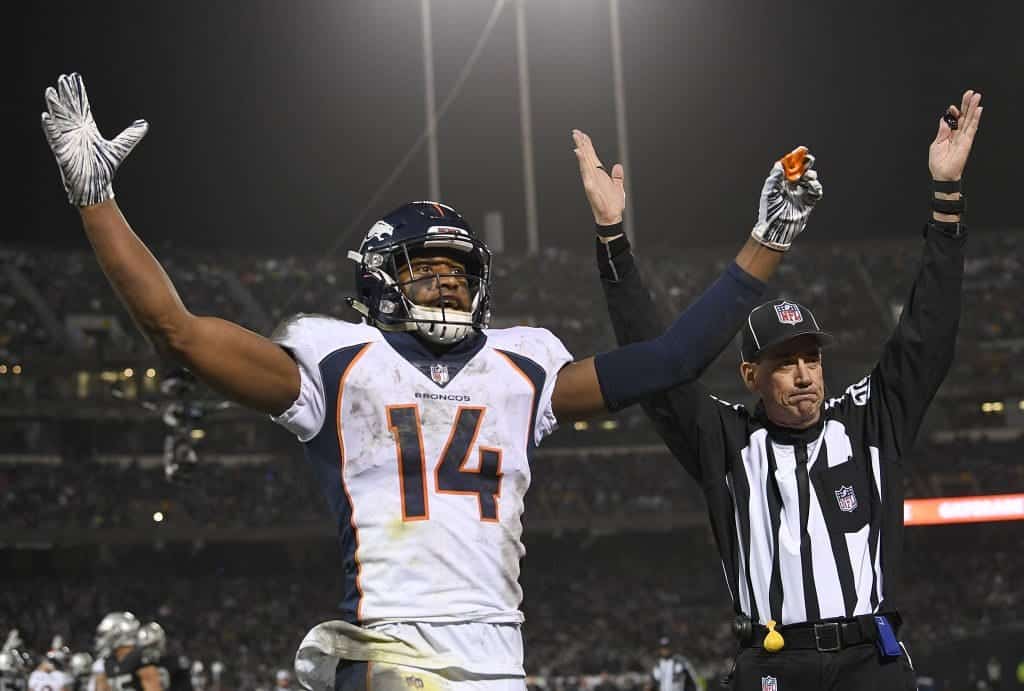 (Photo by Thearon W. Henderson/Getty Images)
What's in this article? Click to show
Denver’s first half
The passing attack
The run game

The Denver Broncos and head coach Vic Fangio didn’t get the season started the way they would have liked. The team ultimately fell to the Oakland Raiders 24-16; however, it was the offense that gave Denver its biggest cause for concern. What led to the offense’s struggles and can Fangio and staff mend these issues for Week 2 and beyond?

The Broncos had three offensive drives in the first half, ending in 2 punts and a missed field goal opportunity. The team started the year with a 3-and-out, needing an answer after Derek Carr and the Raiders drove down for a touchdown on their opening drive.

While Denver’s offense was struggling to stay on the field, the Raiders were taking advantage of the Broncos’ woes, striking twice to go up 14 at the half. If the Broncos want to be more competitive this season, they will have to get better early in games, both on offense and defense.

While the passing attack had its struggles, it proved to be the better option for the Broncos against the Raiders. One of my breakout candidates for the year, Courtland Sutton, started his season off with a bang, grabbing seven balls for 120 yards. I expect 2019 to be a transition year, with Sutton becoming the No.1 WR for Denver. Emmanuel Sanders also made a promising return from injury, finishing the game with five catches for 86 yards and one touchdown, a very encouraging sign for Sanders and his future.

Denver’s passing game didn’t really get off the ground until the second half. Joe Flacco gained a little more confidence in the second half and found his rhythm. In the first half, Flacco kept passes short and safe looking for some easy completions to get the offense rolling, however, in the second half, he started to open the offense up, delivering more balls down the field. This seemed to spark the offense as they collected 16 points on three long drives in the half.

A big issue that Denver will have to fix is preventing sacks. The Broncos had multiple drives that were halted by sacks, either taking the team out of field goal range or forcing the team to kick a long field goal. On a drive early in the second quarter, for instance, Flacco was sacked for a 10-yard loss. This took the team from the Oakland 33 yard line back to the 43, which forced the team to punt and meant losing out on an opportunity to score three points and gain some momentum. This wasn’t the only example of sacks stalling out drives, and it should be a priority for this offense if they hope to become a more consistent scoring threat.

The run game was the most disappointing facet of the offense. Denver had a strong run game in 2018. In his rookie season, Phillip Lindsay busted out of the gates with a 1,000-yard rushing campaign. Against the Raiders Monday night, Lindsay was unable to get anything going. Lindsay ran 11 times for just 43 yards. Hoping to build off last season, this was not the start he was looking for. Eventually, Royce Freeman was able to find more success as he carried the ball ten times for 56 yards and busted off a large 26 yard gain.

Denver will be leaning heavily on their run game this season. Getting Lindsay going will be crucial for Denver as Flacco is at his best with a strong run game and play-action offense. With the Chicago Bears coming to town this Sunday, things will not get any easier. The run game should return to form. Hopefully, this was just a rough game for Denver.

If this offense can build upon the drives they had in the second half Monday night and prevent some costly sacks; they will no doubt be in a better situation. It will take time for this offense to gel, but the pieces are all there for a team ready to score points.
Daniel is a writer for PFN covering the AFC West. He can be found on twitter at @DraftWildcard.