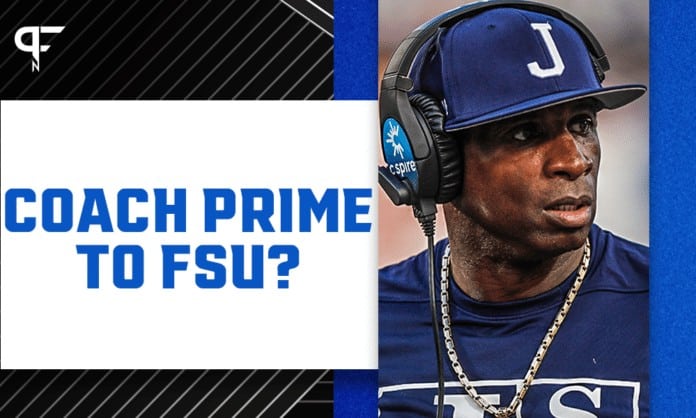 Sources: Deion Sanders could be Florida State’s next head coach

Could Deion Sanders become the next head coach at Florida State? PFN's Tony Pauline says the rumor is very real and not new.

By Cam Mellor
September 18, 2021
What's in this article? Click to show
Deion Sanders’ potential road to Florida State
What it would take to get Sanders
Would Sanders make a good coach at Florida State?
“Neon” to FSU isn’t new

The Florida State Seminoles are in desperate need of change. As reality continues to shrink around them, it seems current head coach Mike Norvell isn’t the change FSU needs. Until something does change, you can sure bet a name commonly circulated around Florida State’s head coaching seat will, of course, be Deion Sanders.

The Week 3 slate of college football witnessed the Seminoles kick off their game against Wake Forest as 4.5-point underdogs. It wasn’t long ago that the Seminoles would easily spot their opponents a three-possession lead in those odds.

It’s been seemingly a decade-long process for FSU to fall into obscurity and feels even longer since they won the 2013 BCS Championship. So, how’d they get to where they are now?

The Seminoles are still just eight years removed from that 2013 National Championship. Yet, they’re making history in the wrong ways in the post-Jimbo Fisher and Bobby Bowden era.

Bowden stepped down as head coach in 2009 after finishing his illustrious career as major college football’s all-time leader in wins. Bowden coached the Seminoles from 1976, winning 304 games, including 2 national championships. He relinquished control to his head-coach-in-waiting, Jimbo Fisher.

Fisher famously left for Texas A&M in 2017 when reporters spotted a discarded Christmas tree on his curb ahead of Christmas Day. Fisher finished his tenure as head coach with an 83-23 record, a BCS Championship, three ACC Championships, and four AP Top 10 finishes.

Since Fisher’s departure, FSU has hired Willie Taggart and Mike Norvell to long, large contracts. However, they brought little success. Taggart won just nine games in two seasons before being ousted in 2019. Norvell has won just 3 of 11 games to start his tenure.

And it gets worse for FSU and Norvell. According to Pro Football Network Chief NFL Draft Insider Tony Pauline, Norvell’s lack of success coincides with his unfavorable presence in Tallahassee. Speaking on Between the Hashes, Pauline noted powerful Seminole influencers opinions on Norvell:

“I’m told that Mike Norvell is not well-liked throughout all of Florida State with those who are influential,” Pauline said.

Note: To watch the entire episode of Between the Hashes, tune in to the video player above. You can also listen on your favorite podcast platform, including Apple Podcasts and Spotify. The conversation around Sanders begins just after the 33 minute mark.

What it would take to get Sanders

Just because he seems not in good standing with FSU influencers, it would certainly be difficult to remove Norvell. But don’t rule out the boosters coming in to help.

“Norvell signed a six-year deal two years ago, it’s not looking good at Florida State,” Pauline said. “If he doesn’t turn it around, I can see the boosters coming in to help with the buyout for Norvell.”

Norvell’s contract is $26.5 million over six years. Even with that amount of money as a potential buyout, the reasons are stacking up against him.

Norvell lost the team’s first-ever game to an FCS opponent against Jacksonville State last week. FSU is also in jeopardy of starting a season 0-3 for the first time since 1970. It’s gotten so bad, apparently, that even winning out may not be enough to save his job.

“I asked, ‘What happens if Mike Norvell goes undefeated the rest of the season?'” Pauline continued. “My source told me, there’s still a very good chance they bring Sanders in. But Deion Sanders coming to Florida State wasn’t just talked about this past Sunday night after Florida State lost to Jacksonville State.

“It’s been something that’s been talked about and I’ve heard about since we got into Spring Football earlier this year. Deion Sanders to Florida State is very real.”

Would Sanders make a good coach at Florida State?

That’s arguably the biggest question and deterrent as to why it hasn’t already happened. Sanders has some experience, coaching in the high school ranks for stints since 2012. Jackson State announced him as the head coach in 2020. Sanders has led the Tigers to a 6-3 record so far in two seasons.

“I’m told that they like Deion Sanders because obviously he’s got the personality,” Pauline said. “They think he’d be a great recruiter. They like his coaching ability or his coaching potential. I mean, for what it’s worth, if you ever watch the NFL Combine coverage on NFL Network, Sanders was great when he would break down the defensive backs.”

Sanders’ time at Florida State as a student-athlete

Sanders is also an alum of Florida State. He famously played football, baseball, and track for the Seminoles in the late 1980s. Sanders was a two-time consensus All-American at cornerback and finished with 14 career interceptions.

Sanders was drafted fifth overall in the 1989 NFL Draft and went on to have a Hall of Fame career in the NFL.

So, what would the drawback be for hiring Sanders as the next FSU head coach?

The blueprint has been laid for a coach getting into the major college football ranks for the first time. After three decades in the NFL, current Arizona State head coach Herm Edwards famously returned to the sidelines for the Sun Devils.

Edwards, who had no previous experience coaching college football, brought with him a star-studded cast of assistants. That blueprint should certainly be a path towards getting Sanders back to Tallahassee.

As “too good to be true” as it may seem for Florida State fans, just how real could it be to bring a University hero as the next head coach? As far as Pauline is concerned, it’s very real. And it didn’t just begin after losing to Jacksonville State.

Sanders will be on the sidelines against UL Monroe on Saturday night. Tensions will only continue to grow if Norvell keeps falling and Sanders keeps gaining success with the Tigers.

And unfortunately for FSU fans, both of those situations seem very likely.

“Things at Florida State are not well.”