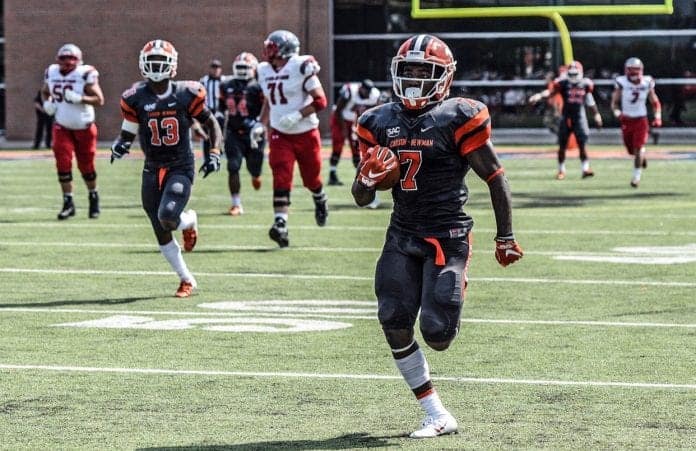 Carson-Newman defensive back Darius Williams built to defy the odds

The rapidly ascending small school standout will have an opportunity to showcase his talents in front of NFL brass at the 2020 East-West Shrine Bowl.

If you look hard enough, you’re likely to find a plethora of NFL talent toiling in the depths of Division II football. Though some eventually get discovered, most of these players tend to get overlooked for a multitude of reasons, slipping through the cracks of their small NFL window. Their dreams all too often left unfulfilled. This is the story of Carson-Newman defensive back Darius Williams, one of an exclusive fraternity of Division II players that will be afforded the opportunity to showcase his talents in front of NFL brass at the 2020 East-West Shrine Bowl.

Darius Williams’ love for the game began at the early age of eleven.

Well before he evolved into a known commodity among NFL circles, he starred for the Lakewood Junior Spartans in St. Petersburg, Florida. The young standout wore many hats, playing nearly every position on the football field: defensive line, linebacker, cornerback, safety, running back and wide receiver.

Prior to his sophomore year of high school, Williams transferred to Northside Christian School, where he was coached by former Tampa Bay Buccaneers fullback Mike Alstott.

The versatile athlete eventually found a permanent home at defensive back, with the occasional moonlighting at linebacker. He was named a Blue-Grey All-American and Pinellas County All-Star, amassing the most tackles for a defensive back over a two-year span (112).

Despite consistent production and prestigious accolades during his three-year stint at Northside Christian School, Williams received minimal interest from Division I schools.

“Coming out of high school,” Williams recalled in his interview, “I wasn’t as big of a prospect as other players. I had offers from Missouri, Wake Forest, Colgate, FAU, schools like that. They never pulled the trigger on me, never really gave me the official offer, and I was left with three Division II schools that I had to make a decision from: West Florida, Florida Tech, and Carson-Newman.”

Drawn to the illustrious facility and attentiveness of the coaching staff, Williams committed to Carson-Newman University.

New beginnings often present their own unique set of challenges, however, and it didn’t take long for Williams to identify his biggest hurdle.

“I felt like physically I was ready to play college football,” Williams said. “But honestly, mentally I don’t think I was there, learning the playbook and everything.”

While challenges of establishing yourself on a larger platform can understandably appear daunting, it also has it’s benefits. Playing behind All-American safety Jerry Miclisse, Williams was afforded the opportunity to learn the finer nuances of the position and adjust to the speed of the college game.

As a freshman, Williams appeared in nine games for the Eagles, including one start. He accumulated 11 tackles (one for loss), one fumble recovery, and a touchdown.

Williams was well aware of the logjam of talent at the safety position going into his second season. Despite what was at stake, his mindset remained every offseason. He approached the months leading up to his sophomore campaign with a familiar goal on his mind: Work hard to be the best player he can be.

Williams’ dedication and diligence to his craft over those long months would pay off handsomly; the ascending defensive back emerged from spring practices as a starting safety.

In his first full season as a starter, Williams compiled 48 tackles, 3.5 tackles for loss, 5 interceptions and 3 pass breakups, on his way to becoming Carson-Newman’s 122nd All-American.

Coming off an All-American season in which he started all 11 games at safety, the game was finally beginning to slow down for the 5-foot-10, 195-pound swiss army knife. He’d now grown into a leadership role, shouldering many responsibilities, perhaps none more important than prioritizing communication on the backend.

“The most important thing from my sophomore year to junior year,” Williams explained, “was not only knowing what I’m doing in my position, but also knowing what my teammates are doing on a play, so I can try to figure out how to make a play.”

Williams finished his junior year with 55 tackles, 3 tackles for loss, 1 interception, and 1 pass breakup. His season highlights included a 56-yard interception return against Wingate and a career-high 13 tackle effort against Virginia Union.

Returning for one final go-around, Williams now had a different goal in mind: Improve his stats in each category from the year before.

Now a bonafide star in the South Atlantic Conference, the opportunity to take his talents to the next level was becoming more realistic with each practice. Widely recognized as an indispensable weapon in the secondary, Williams’ versatility could ultimately be what lands him a highly coveted roster spot at the next level.

In an encore performance, Williams truly saved his best for last. In just nine games, he has accounted for 65 tackles, 7.5 for loss, 1 sack, 2 interceptions, 1 pass breakup, and 2 forced fumbles.

Though he always remained focused on realizing his childhood dream of playing at the next level, he took the field for his final season with an even greater sense of urgency:

“After my junior year, a couple people were talking to me about the NFL,” Williams said. “Just coming from a D-2 school, you never really have the [same] opportunity as a bigger, Division I player. Just hearing those things is kind of a positive for me; it makes me want to play even harder, makes me want to work even harder. Trying to go to the NFL has been a dream of mine ever since I was little, and hearing those things going into my senior year made me want to work even harder in the offseason.”

Earlier this month, Williams received an invitation in the mail that he’d been waiting on. An invitation that might mean more to him than possibly any other player in the country.

He’d be selected to participate in the 2020 East-West Shrine Game, one of the premier college showcase games — held in none other than his hometown of St. Petersburg, Florida.

“It’s just so crazy,” Williams said. “Just to get the invite and be around people from Florida, Tulane, and Indiana — schools like that. Being a D-2 guy, getting a chance to be around those guys, it’s really cool to me. It’s a blessing to get the invite; I’m really excited about it.”

Williams will have ample opportunities to prove to coaches, player personnel and scouts that he is worthy of being one of the chosen ones drafted to an NFL team with a strong showing in the week-long interview at Tropicana Field.

With the versatility to line up as the deep safety, play in the box, kick inside and cover in the slot — or even line up on the perimeter and play some cornerback, teams are likely to be enticed with Darius Williams’ many defensive back hats. While he may not have the prototypical size for the next level, he more than makes up for it with innate instincts, ball skills, football intelligence, and a hard-nosed mentality that is unparalleled.

With a build and skill set similar to recent draftees Desmond King and Budda Baker, both integral pieces to their respective defenses, Williams has a hunch on his best fit.

“I feel like I would thrive more maybe at the nickel position,” Williams said. “Just because I can blitz off the edge, cover the slot, and play in the box.”

When it comes to NFL comparisons, there are several players with a comparable skill set to Williams that would fit the bill. Williams, however, has already given it some thought.

“At safety, I would probably say Jamal Adams or D.J. Swearinger,” Williams said. “I feel like I play similar to those guys, just because they’re really reckless playing safety, giving their body up and always making plays. The most important thing about them: They’re always having fun. Whenever they make a play, they’ll celebrate. Having fun is just a key part for me playing football. Nickel, I’d probably say Quandre Diggs. He’s a versatile nickel-safety, and I feel like that’s what I am, too.”

Coming from a small high school and tiny Division II program, casual fans may mistake defensive back Darius Williams as merely a small fish in a big pond. But given his collegiate production, NFL comparisons, and what he’s had to overcome just to get this far, it would be wise not to overlook this small school diamond in the rough.