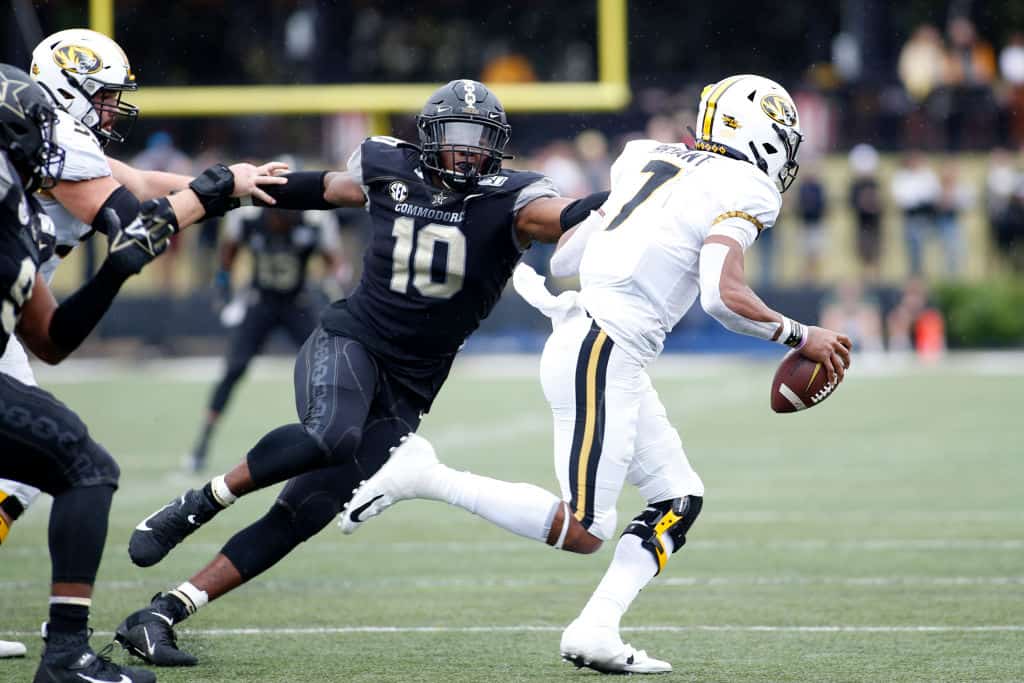 The NFL’s sub-package revolution has impacted not only the second and third levels but also the defensive line. Sometimes different alignments need to be used up front to allow for more combinations on the back end. Thus, defensive linemen who can produce in a variety of alignments are growing more valuable. Consequently, it’s no surprise that Vanderbilt edge rusher Dayo Odeyingbo is quickly rising the NFL Draft board. What is his range, and what is his ceiling?

Positives: Explosive defensive line prospect with outstanding physical skills and a large upside. Plays with consistent knee bend, fundamentally sound, and very effective with his hands. Fires off the snap with a terrific first step and rushes the edge with speed. Sets the edge and occupies blockers. Intense. Easily gets down the line of scrimmage and out into space to make plays, chases the action hard, and is rarely off his feet. Remains disciplined with assignments and does more than pin his ears back and rush up the field.

Negatives: Out-positioned from the action by a single blocker. Must improve his playing strength. Suffered a significant injury prior to the Senior Bowl and may not be ready for the season.

Analysis: I believed Odeyingbo was one of the most underrated defensive linemen in this year’s draft prior to his injury in January, and he’s a three-down defender with great upside. He’ll only get better as he physically matures, but now has the additional hurdle of returning from injury. While I initially graded him as a top-75 selection, Odeyingbo could fall through the draft and end up a Day 3 steal.

Among its SEC counterparts, Vanderbilt isn’t often known for its NFL talent production. However, the program has quietly sent several high-caliber defensive prospects to the NFL over the past half-decade. Standouts like Zach Cunningham, Oren Burks, and Joejuan Williams all went in the top three rounds. Vanderbilt edge rusher Dayo Odeyingbo has a chance to follow their lead in the 2021 NFL Draft.

Once a four-star prospect out of Irving, Texas, Odeyingbo has always had a degree of NFL potential. He received offers from schools such as Baylor, Mississippi State, and Texas A&M as a senior in 2017 but opted to sign with the Vanderbilt Commodores instead. Head coach Derek Mason reached his first bowl game the previous season, and Odeyingbo aimed to help the Vanderbilt program build itself into a respectable SEC entity.

Odeyingbo saw playing time as a true freshman, appearing in all twelve games on the season. He logged 17 total tackles, 2.0 tackles for loss, a half-sack, and an interception, which he earned against Alabama A&M.

In 2018, Odeyingbo’s role developed, and he became a primary contributor on the defensive line, starting ten of 12 possible games. Over that stretch, Odeyingbo saw increased production, accumulating 28 total tackles, 4.5 tackles for loss, another half-sack, a pass deflection, and a forced fumble.

Odeyingbo flashed his upside in his first two seasons, but 2019 was the year that the Vanderbilt edge rusher first became a regular presence in the opposing backfield. Odeyingbo started 11 of 12 possible games, amassing 45 total tackles, 12.0 tackles for loss, and 1.5 sacks. It was an impressive jump for the junior. However, Odeyingbo still didn’t have enough draft notoriety, so he returned for his final season.

Odeyingbo needed to improve his draft stock in his final season, and he accomplished that despite uncertain circumstances. Odeyingbo played and started in eight games, racking up 32 total tackles, 8.0 tackles for loss, 5.5 sacks, and a pass deflection. He earned All-SEC honors for the first time in his career, earning a spot on the second team.

After the conclusion of the 2020 season, Odeyingbo chose to forgo the NCAA’s extra season of eligibility. The senior officially threw his hat into the ring for the 2021 NFL Draft.

You have your traditional edge rushers, your 3-4 outside linebackers, and then you have Dayo Odeyingbo. The Vanderbilt EDGE is clearly a different breed, evidenced most directly by his physical traits. Standing at 6-foot-6, 275 pounds, Odeyingbo has the size to line up anywhere on the line, and that’s exactly what he did at Vanderbilt. Although he was primarily an edge rusher, Odeyingbo also played at the three-tech spot, the one-tech spot, and the nose position and had quality reps at each.

Odeyingbo’s size stands out even before the snap, as he compliments his lean, stocky frame with arms over 35 inches long. But at the snap, Odeyingbo also displays superb athleticism for his size. He brings a ton of juice off the line, and he also has good lateral twitch, which he uses to get linemen off-balance in a number of different alignments.

On top of his burst and energy, Odeyingbo also flashes surprising cornering ability off the edge. His bend isn’t quite top-tier, but he still offers enough balance and flexibility to take tight corners while accelerating.

When he adequately combines his length with his explosiveness, Odeyingbo is a dangerous player. As a passer rusher, his length allows him to convert his burst into power, and he also has the power and grip strength to wrench linemen aside when he has good leverage. In run defense, Odeyingbo’s length allows him to set the edge, and when he disengages, he has enough long-striding speed and urgency to make plays in pursuit.

What are the possible concerns with Odeyingbo?

Dayo Odeyingbo is an athletic specimen, but more than anything, he’s raw. The Vanderbilt edge defender has almost all the tools. He just needs to learn how to use them more efficiently on a consistent basis.

Odeyingbo has the explosiveness, length, and fast, powerful hands to be a threat, but he can be more consistent packaging all those traits together at once. He also shows flashes of hand technique usage and counter moves on the edge, but again, he can be more consistent and add more to his arsenal. Nevertheless, the presence of the moves he uses currently makes clear that he has the capacity to develop more.

Additionally, Odeyingbo sometimes plays a bit too tall, which is expected for someone of his build. Better leverage and precision can take Odeyingbo’s game to the next level. With NFL coaching, that should be fairly attainable.

Dayo Odeyingbo may need some time to develop at the NFL level before being a consistent starter. But the Vanderbilt EDGE has the skill set to be an incredibly versatile defensive lineman. His explosiveness, length, and motor allowed him to produce all across the line with the Commodores, and he offers that same mix-and-match potential for multifaceted defensive schemes at the NFL level.

Odeyingbo could be a 4-3 edge with his athleticism and length, but his versatility and pass rushing upside might be better utilized in a 3-4 scheme. There, he can line up at nose, end, and five-technique based on situational factors. On Day 2 or early Day 3, he profiles well with teams like the Lions, Titans, Bengals, and Bears. However, his wide-ranging ability should make him coveted across the board.

In an NFL that prioritizes versatility, Dayo Odeyingbo is one of the most enticing draft prospects this year. While he still has further development to undergo, the senior captain has a ton of potential. If utilized the right way, he could become a game-changing weapon on the defensive line.