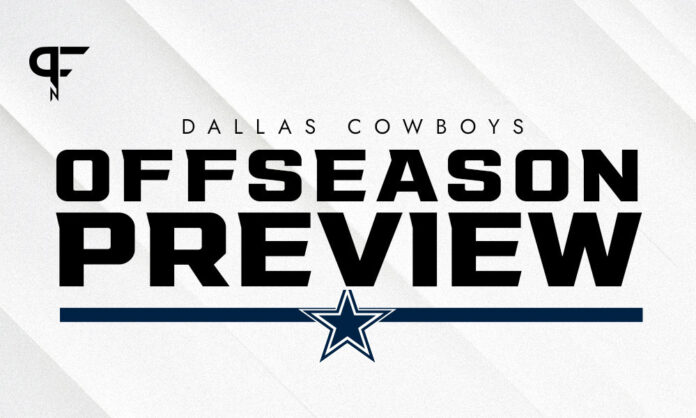 A first look at the Dallas Cowboys' 2023 offseason, with a rundown of their free agents, cut candidates, cap space, and team needs.

The 2022 season was quite the roller coaster for the Dallas Cowboys. Sometimes the offense was great and the defense was bad. Sometimes the opposite was true. Sometimes Dak Prescott looked like a top-five passer. And then, sometimes, he forgot the color of his own team’s jerseys.

They might not always be good, but the Cowboys are always interesting. And that won’t change this offseason, what with their long list of free agents, short list of cut candidates, and offensive-focused list of team needs.

Dallas Cowboys Offseason Preview: A Decision at Running Back

Running back isn’t the biggest need, but it’s the most significant. That’s because Tony Pollard is set to become one of the highest-paid players at his position — and the Cowboys already have one of those in Ezekiel Elliott.

But there’s a strong case to be made that Pollard is the better of the two. He led Cowboys running backs in rushing yards (1,007) and yards per carry (5.2) and was second on the team in yards from scrimmage (1,378). Plus, he’s younger than Elliott (Pollard won’t be 26 until April) and, with just 510 carries, has a lot less wear and tear.

In an ideal world, the Cowboys would keep both. But that’s a challenge given their salary cap situation and what Pollard knows he could get in free agency. Spotrac estimates his market value is $8.4 million AAV — which would give Dallas two of the league’s eight highest-paid running backs.

According to Spotrac, the Cowboys, as of early January, had $6.5 million in 2023 salary cap space, 13th lowest in the NFL. That figure includes $9 million in dead cap and $5.2 million in rollover space. It is based on an estimated $225 million NFL salary cap in 2023.

The following Cowboys players are set to hit free agency. Restricted free agents are noted with the abbreviation RFA and exclusive rights free agents by ERFA.

Overview: If it seems like we’ve been talking about Dalton Schultz’s free agency for the better part of two years, you’re right. The Cowboys didn’t extend him ahead of or during his contract year and then slapped the franchise tag on him last winter. A second tagged year seems unlikely — particularly since Schultz’s numbers were down across the board in 2022.

Overview: The Cooper Rush sugar rush in Dallas was as glorious as it was fleeting. He more than did his part as Prescott’s backup — directing the Cowboys to a 4-1 record with eight touchdowns and four interceptions. The best-case scenario for Rush in 2023 is convincing a team to bring him in with a chance to compete for the starting role.