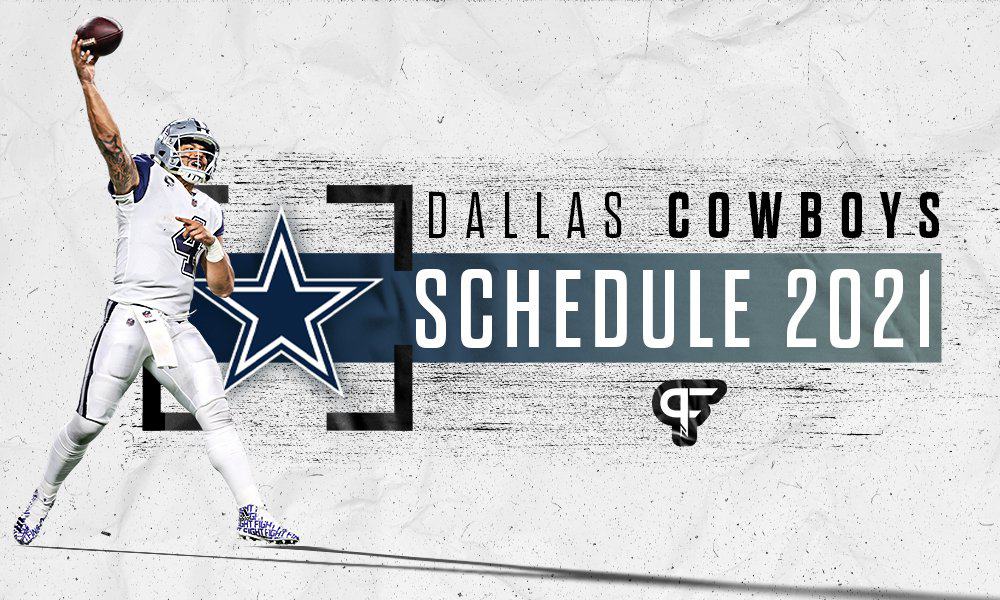 What is the Dallas Cowboys’ 2021 NFL schedule, how many times will we see them in primetime games, and who are the toughest and easiest opponents on their schedule?

How many primetime games do the Cowboys play in 2021?

The Cowboys are set to play five primetime games. They will be against the Buccaneers in Week 1, the Eagles in Week 3, the Vikings in Week 8, the Saints in Week 13, and Washington in Week 16.

When is the Cowboys’ bye week?

The Cowboys’ bye week is in Week 7.

The Cowboys’ 2021 schedule is intriguing because they are one team whose strength of schedule does not change at all whether it is based on 2020 win totals or Vegas 2021 projected win totals. Either way, their schedule ranks as the second easiest in the league heading into next season.

The Cowboys have just two NFL teams on their 2021 schedule that are projected to win 10 or more games. However, both of those games are extremely tough in the Tampa Bay Buccaneers and Kansas City Chiefs.

Having to go on the road and play the two teams that competed in the previous Super Bowl is never ideal. Especially when both of those teams have offenses that can dominate struggling defenses. The Cowboys will need their defense to play at their very best if they are to have a chance of containing either Tom Brady or Patrick Mahomes.

With the NFL schedule master smiling on the Cowboys in 2021, Dallas needs to take full advantage. Not a single team on their home schedule is projected to win more than eight games this season. The road schedule somewhat makes up for the easy home schedule, but playing against their own division certainly helps lower the level of difficulty for Dallas.

What the Cowboys do not have on their schedule is any games against teams projected to win six games or fewer. The lowest projected win total on their schedule belongs to the Eagles at 6.5. The Cowboys and Eagles have split their head-to-head matchups the last two seasons. However, with Jalen Hurts under center, the Cowboys should feel confident of a potential season sweep.

The next lowest projected win total on the Cowboys’ schedule is the New York Giants. The Giants themselves need to improve in 2021 or serious questions will be answered.

New York’s Week 17 victory over Dallas last season was their first against the Cowboys since 2016. If Dak Prescott is fully healthy for the Cowboys, they should have a good opportunity to take one or both games against the Giants this season.

The way the Cowboys’ schedule in the 2021 NFL season breaks down it leaves them very little room for error at home. With a weak schedule on paper at home and a tough one on the road, if the Cowboys cannot win five or six of their home fixtures, they could struggle to make an impact in the NFC.

Their road schedule sees them play a number of teams expected to be in contention for the playoffs. With Prescott back under center, the Cowboys should have a chance to make it to 10 wins. The issue is on the defensive side of the ball. Can they keep teams under 30 points on a consistent basis?