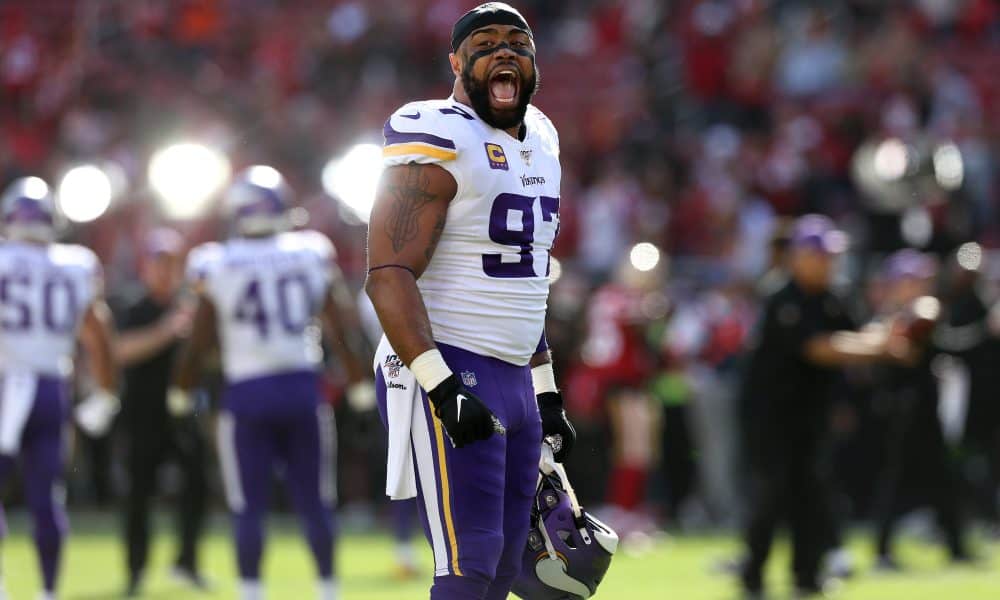 Photo Credit: Cary Edmondson-USA TODAY Sports
What's in this article? Click to show
Cowboys sign another mercenary
Griffen can defend the run at a higher level than Quinn
Lawrence is a technical mastermind

My oh my how things can change in an instant. Just one week ago, Cowboys fans would have seen a bleak list of pass rushers headlining their 2020 campaign. But just days later, Demarcus Lawrence is no longer the only player on the Cowboys top edge rushers of 2020, because they signed Everson Griffen as well. Both Griffen and Lawrence are two names on Williamson’s top 25 list that provide hope.

That’s what Griffen is. Let’s be honest here. The man went unsigned until the threat of an actual training camp presented itself. Quinn, who rushed off the right side for the Cowboys in 2019 and ended up as the 15th-best rusher on Matt Williamson’s list, hadn’t had a 10-sack season since 2014.

That changed in 2019 when Quinn notched 11.5 sacks in just 14 games for the Cowboys after serving a two-game suspension for testing positive for probenecid, which is a known masking agent for performance-enhancing drugs. Quinn reportedly took medication for seizures that had traces of probenecid in it.

Quinn was a mercenary, and the contract he received by the Chicago Bears after one year in Dallas is proof of that. In one season with the Cowboys, he made $5.3 million, which took his career earnings to $38.2 million in his career through nine seasons. In the next five years with the Bears, he’ll make $69.6 million. Why wouldn’t you take your talents to Dallas for a season if it means earning double what you have in your career in half the time?

And the kicker with Griffen is he’s making around the same money Quinn did in Dallas with a markedly more impressive resume since 2014. Now, he is three years older than Quinn, which will stunt his future earning potential in a way it didn’t with Quinn, but the Cowboys are getting a better overall player than they did in Quinn.

As Williamson stated in his article

“Besides Calais Campbell, Griffin is the oldest player on this list, which is somewhat worrisome when considering how his offseason has gone. But this is a refined pass-rusher with a nasty spin move and a great feel for when to dip inside after setting up his opponent in previous snaps. With their poor pass-rush, the Seattle Seahawks should get Griffin locked up as soon as possible.”

The Seahawks undoubtedly would have been better off with a talent like Griffen on the roster. However, why waste such a talented pass rusher with no compliment in Seattle when he can line up opposite “Tank” Lawrence in Dallas?

The Cowboys signing of Griffen was no accident either. New senior defensive assistant George Edwards was Griffen’s defensive coordinator from 2014-2019 with the Vikings. Griffen is using his spin moves on proven veterans, not hitting only on rookies or low-tiered left tackles. No, he’s hitting the spin on the Terron Armstead, Tyron Smith, and David Bakhtiari’s of the world.

Griffen back on track after previous struggles

2018 was rock bottom for Griffen, who, after multiple incidents in September of that year, spent months in a sober house to address issues based upon a lifetime of unresolved personal struggles. Griffen was voted a team captain in every season since 2015 as a Viking, and from 2011 through 2017 had only ever missed two games to injury, proving his physical durability is unquestionable.

Griffen can defend the run at a higher level than Quinn

That right there is what tips the proverbial scales in the direction of Griffen being an overall upgrade from Quinn. Griffen is a physical freak, and it shows when he is aligned across from another freak in Tyron Smith, like in the example above. Griffen lacks the ideal length of an edge rusher with arms shorter than 33 inches, but he makes up for it with a ridiculous mass and speed combination. The 270-plus pound defensive end ran a 4.65 40-yard dash at the combine in 2010 at 6-foot-4.

The Cowboys’ addition of a known commodity in Griffen is massive given the unknown of Randy Gregory, Aldon Smith, and Bradlee Anae. With Tyrone Crawford and Dorance Armstrong also in the mix, this gives Cowboys fans a feeling of relief, believing the defensive line is no longer an issue on that side of the ball. The Cowboys top edge rushers of 2020 look a lot different now.

Anybody that cites last seasons sack totals as a reason to justify calling “Tank” overpaid need not be in your life. Cut them out entirely, because Lawrence is an absolute baller. Williamson having him at 13 might seem low for his third-highest average annually valued contract, but with a recent influx of truly special talents at the position, it’s tough to argue the placement.

After battling injuries early in his career, Lawrence’s 2017 and 2018 campaigns showed what was undoubtedly a top-10 edge rusher at the time. When we discuss the added bonus of run defense, one might still argue he cracks those rankings, but a lack of production after a year of unsynchronized pass rushes by teammates, and a litany of double teams hurts his spot in the rankings.

Lawrence was double-teamed on a quarter of snaps last season, yet still was able to boast the third-highest win rate as a pass rusher behind Quinn and T.J Watt (more on that later.) Winning off the edge has never been his strength. That’s not the kind of athlete he is. What he is is a stone-cold, unmitigated, tactical technician.

Lawrence is a technical mastermind

“Some looked at Lawrence’s 2019 season (only five sacks) as a small step back from the year before. The tape, however, doesn’t show that at all. Lawrence is just a high-quality all-around edge rusher that causes problems week after week. And he can beat his opponent in many different ways.”

Only Lawrence and Jacksonville Jaguar (for now) Yannick Ngakoue can be considered the Euro Cross Chop masters. For all my basketball fans out there that’ll yell, “it’s not a true Euro step because he isn’t crossing over his feet” don’t!

The situation is 4th-and-10 late in the Cowboys Week 15 matchup against the Rams. They’re currently up 31-7 late in the third quarter. Lawrence does a good job of setting up the outside speed rush immediately off the snap. This gets young right tackle Bobby Evans extending that right leg out in his 45-degree set to attempt to stay in a good half-man relationship with Lawrence. However, Lawrence creates an immediate conflict when he plants off his outside foot to appear as though he’s about to slant across Evans’ face.

When he does this, it forces the hand (literally) of the tackle, who attempts to strike to Lawrence’s chest with his outside hand. Lawrence begins to bring his right arm up and over to wipe away the hangs of Evans, and he supplements that with his left arm clubbing across, so he flattens out down the line. To do this, he must be able to bring that right legs up and outside of the tackles bubble, and for a split second, he has both feet off the ground, giving this particular move somewhat of an aerial attitude.

Lawrence is one of the best against the run

He’s disciplined, strong, and explosive against the run. Lawrence is one of the nastier defenders in the league in terms of attitude, and that attitude shows in his dedication to being a well-rounded player. Here, he’s able to get into Cody Ford’s chest and bow him back off the snap immediately, a physical strength unmatched by most, but his hands and awareness are what helps the most.

In this split zone look, he’s able to cross the face of Ford because he knows that Singletary is going to follow the tight end back across the formation for the inside zone look. He’s able to beat Ford quickly enough to affect the ball darned near at the mesh point to finish the tackle-for-loss. He’s able to club through with the right arm and use his momentum to win through the inside shoulder to get free.

However, it’s not all flash with Lawrence. He sets a nasty edge and has the ability to stand strong against the run consistently. With a plethora of pass-rushing options up and down the defensive line on third downs for the Cowboys in 2020, expect those sack numbers to get back up into the double digits.

TJ Watt: What could have been?

That’s it. Nothing else follows. Just couldn’t react to Matt Williamson’s edge rankings without acknowledging the Cowboys willingly passed on his fourth-ranked pass rusher for Taco Charlton. Imagine what the Cowboys top edge rushers of 2020 would look like if they had drafted Watt? The wounds may never heal.