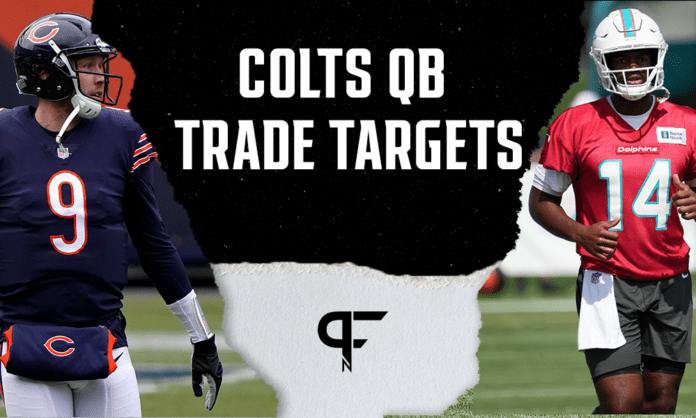 There are a few QB trade targets that deserve consideration for the Colts after news of Carson Wentz's surgery. Will they pull the trigger?

The Indianapolis Colts have had a stroke of unlucky QB injuries. Carson Wentz went down with an injury to his foot that he’ll have surgery on, highlighting the possibility they enter the QB trade market to tread water while Wentz heals. This particular piece isn’t about whether they should trade for a veteran QB, but who could be a possible trade target and who’s available as free agents.

There is no shortage of possible trade targets for Indianapolis, but only a few QBs make sense for the team. They won’t look to move on from Wentz, so it may behoove the Colts to look for a one-year rental contract to trade for. However, those who cover the Colts, like Sports Illustrated’s Zach Hicks, believe this team should ride with second-year quarterback Jacob Eason.

Let’s get this one out of the way. This would easily be the most shocking of all the potential QB trade targets.

Garoppolo might actually be a great fit for the Colts’ offense. He wouldn’t have to push the ball downfield too often, as the Colts have one of the more efficient quick passing attacks. It would be similar to what he’s done in San Francisco but packaged a bit differently.

His contract is easy to rip up after the season as well. His dead cap hit for 2022 is $1.4 million, which is easy to part with. When healthy, Garoppolo has played like a mid-tier quarterback who can keep the bus between the lines. It just doesn’t make sense to give up the assets to acquire him.

Well, we should probably address the elephant in the room now. Foles looks like the QB3 in Chicago, making him a prime trade candidate for the Colts to ride things out while Wentz heals.

However (big however), given part of Wentz’s mental struggles is because there’s a Foles statue outside of Lincoln Financial Field, there isn’t a snowball’s chance in Death Valley that the Colts would make this QB a trade target.

Foles hasn’t rekindled the magic he found in the 2017 NFL Playoffs, but he could be an unflappable backup for a team looking to upgrade the spot. I can’t imagine it’s in Indy.

This QB trade target would make a ton of sense if the Colts were actually willing to trade for a veteran backup. He’s with the Dolphins now after spending the past four seasons with the Colts. Brissett was almost perfectly average in Indianapolis, and he shouldn’t have been asked to start in nearly 30 games.

Still, this Colts roster is good. Brissett didn’t turn the ball over at a high rate during his time with Indy. He also adds value as a runner, although he has some ball-security issues as a runner and in the pocket.

After struggling mightily in 2017 following an injury to Andrew Luck, Brissett looked better in 2019. If Wentz’s recovery time hangs on the lower end of his 5-12 week recovery schedule, this could be the cheapest option.

“Minshew Mania” could be back in action as a QB trade target. After all, he’s destined to be the backup for Trevor Lawrence. He has a bit of a cult following, but there’s a reason the Jaguars were the worst team in the NFL last season, and it wasn’t simply because they were tanking.

Minshew won’t go out and lose games for the Colts, but his physical profile is limited enough to stunt his ability to win games. Minshew, despite the lack of downfield passing attempts, still had a positive CPOE. In fact, he was one of the top 10 most accurate quarterbacks in the league in 2020.

Despite that, he’s one of the QB trade targets that could bring more distractions than necessary, given his following. If he were to play well in relief of Wentz, the noise from outside the Colts organization would be loud.

Mariota secured a no-trade clause in his contract negotiation. It would be surprising to see him go from Las Vegas to Indianapolis. However, if he wants to prove he can still start in this league, he’d jump at the opportunity.

Mariota played well in relief of Derek Carr last year, but it was only one game. He pushed the ball downfield against the Chargers and flashed his ability as a rusher, taking 9 rushes for 88 yards and a touchdown.

Unfortunately, Mariota just hasn’t been the quarterback we once believed coming out of Oregon. He never realized his upside. Instead, the NFL got a good athlete who struggles to stay healthy and is unable to elevate those around him. Regardless, Mariota could do enough with the Colts’ offensive line and weapons to keep them in games as a trade target.

If the Colts want to bring some competition for the beginning of the season, a few veterans in the free market could fit the bill.

Listen, he’s been to and should have won an AFC Championship Game. He’s certainly not a great quarterback, as his employment status suggests. He could provide competition with Eason in hopes of raising his game.

Moore is the quintessential backup quarterback. Last season, he played in relief of an injured Patrick Mahomes. Moore posted a QBR of almost 60 and completed nearly 65% of his passes. Things may not go as well in Indy, but he does get to work behind an excellent offensive line.

How does the Colts’ schedule coincide with Wentz’s recovery timeline?

Considering the 5-12 week recovery timeline, the Week 14 bye does not help mitigate any missed time. Based on current estimates, he could be ready for the season opener or miss the first seven games.