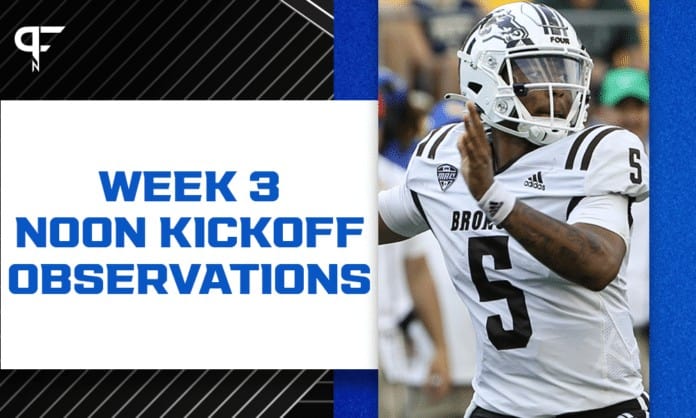 College Football Week 3: Observations and news from the noon slate

The college football Week 3 noon slate of games was full of NFL Draft prospects. Here are some observations from the games.

Week 3 on the college football schedule has given us a few surprises in the early going, as well as some terrific performances from NFL prospects. Here are a few observations from the noon games.

Over the summer, I mentioned how much some scouts liked Western Michigan quarterback Kaleb Eleby when I stamped him as a third-round prospect.  Eleby proved to be worth every bit a Day 2 selection today as he led WMU to a 44-41 upset victory over Pittsburgh. His numbers for the day included 23-of-35 passing for 336 yards, 3 touchdowns, and no interceptions. Will Eleby enter the NFL Draft? I’m told he’s definitely thinking about it.

Entering the draft was something Dillon Gabriel was considering, but that decision has become more unclear. Gabriel fractured his clavicle during Friday’s contest and is now out indefinitely.

I usually loathe when good college tackles are moved inside to guard — see my comments on Thayer Munford of Ohio State during this week’s edition of the Between the Hashes podcast. That being the case, Indiana’s Matt Bedford has really shown me something today.

I graded the junior as a third-round OT prospect coming into the season, but he looked terrific at guard against Cincinnati. Bedford has displayed his usual power, yet at the same time, he was very nimble and effective blocking in motion and getting to the second level.

Contrary to Bedford, Miami Hurricane offensive tackle Zion Nelson was inconsistent against Michigan State. At times, Nelson held the point and controlled opponents in pass protection. Yet, he also had some really bad snaps, resulting in sacks.

I graded Nelson highly off the 2019 film, but he’s not improved much since. In fact, his game has regressed in certain areas. Despite receiving a second-round grade from scouts I’ve spoken with, I stamp him as a fifth-round prospect. Word leaking out of Miami is Nelson will consider entering the draft, which will be a big mistake unless he quickly turns it around.

After not earning a mention from scouts before the season, Cincinnati running back Jerome Ford is turning heads within the community. He is a lot like the other ball carriers that came from the UC system — an inside grinder who picks up a lot of yardage off initial contact. Ford did a good job getting the Bearcat offense moving today and finished the day with 2 TDs. The Alabama transfer could go from a draft non-entity to a late-round pick.

Coastal receiver Jaivon Heiligh continues his tear this season. He finished the day with 4 receptions for 91 yards and 1 TD. In the prior two games, he combined for 12 receptions, 255 yards, and 2 scores. Heiligh should slide into the late rounds if he tests well before the draft.

Nose tackle Jerrod Clark had just 3 tackles but did a terrific job controlling the line of scrimmage.

In my opinion, Buffalo linebacker Kadofi Wright is ridiculously underrated. He ended the day with 6 tackles, including 2 for loss. Wright made several big plays to shut down Coastal Carolina drives. He’ll be a steal as a UDFA.