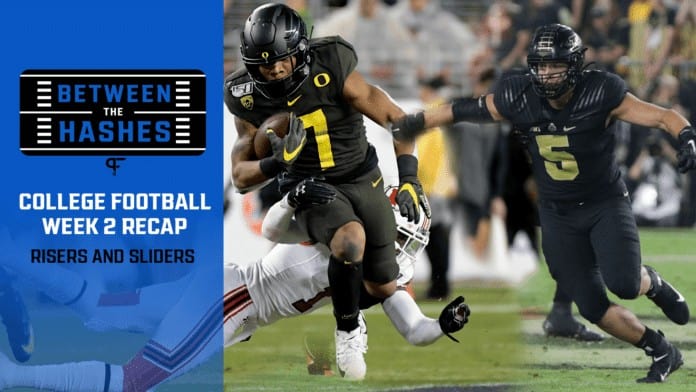 Week 2 of the season is here, and Between the Hashes has you covered with all the latest NFL, NFL Draft, and college football news.

The college football Week 3 slate is set to be an outstanding mix of out-of-conference matchups across the country. While the college football world still deals with the news of Clay Helton’s firing at USC and the heating seat for Mike Norvell at Florida State, the games for this weekend are reaching a fever pitch.

From Auburn vs. Penn State and Cincinnati vs. Indiana, they still pale in comparison to the marquee matchup between Alabama and Florida. A bevy of games await us to watch in between and outside of those three, but those three contests will certainly draw the viewers.

Note: To watch this episode of Between the Hashes, tune in to the video player above. You can also listen on your favorite podcast platform, including Apple Podcasts and Spotify.

Eyes from all over the nation will be on Alabama freshman QB Bryce Young and his first real test of the season against the Gators. Florida will debut their two-quarterback system in Emory Jones and Anthony Richardson to the nation.

This is all without discussing their potential next-level players that will dot the field. For 2022 NFL Draft purposes, look no further than the matchup between Alabama WR John Metchie III and Florida CB Kaiir Elam.

Elam has proven to have elite ball skills and terrific coverage ability. Metchie is finally “the man” at Alabama after playing with a quartet of current NFL WRs (Henry Ruggs, Jerry Jeudy, DeVonta Smith, and Jaylen Waddle).

When these two players match up, it’s must-see television.

Deion Sanders: The talk of Tallahassee

The Florida State Seminoles are officially 0-2. Say what you will for a “moral victory” over Notre Dame — a loss is still a loss. Let it be known, that overtime loss to Notre Dame looks even worse now that the Fighting Irish barely squeaked by a Toledo team last week.

Florida State signed head coach Mike Norvell to a six-year contract, but the talk of the town is he isn’t well-liked among regents, boosters, and several other high-ups in Tallahassee. A former player, however, is on the opposite list.

Between the Hashes co-host and Chief NFL Draft Analyst Tony Pauline is hearing that there is actual motion behind getting former FSU player, NFL Hall of Famer, and current Jackson State University head coach Deion Sanders as the Seminoles’ next head coach. Pauline even mentioned this was a real possibility after last season.

“I even asked, what would [Mike] Norvell have to do in order to stay in Tallahassee? And the answer I got was ‘even if he went undefeated, it’d be tough to see him staying’.”

There is little to suspect Norvell makes it to the end of his six-year contract. It will be telling if he even makes it through six games this season.