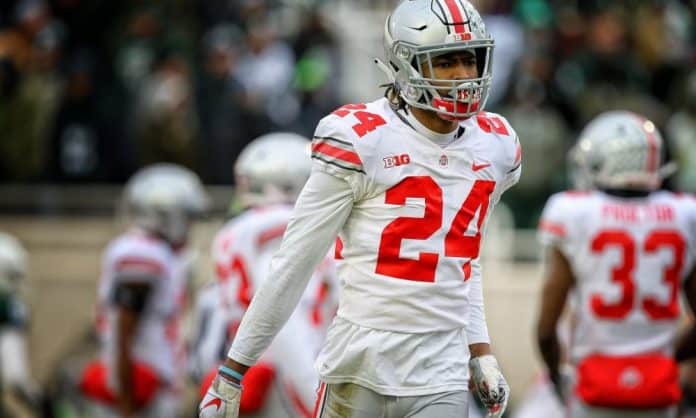 Looking ahead to the 2021 draft, PFN's Cory Kinnan gives his review on the players' Matt Valdovinos selected for the Cleveland Browns in the first three rounds.

By Cory Kinnan
August 14, 2020
What's in this article? Click to show
Browns add a versatile defensive back with 16th overall pick
A review of Browns’ second-round selection in this mock draft
Looking at the third-round picks of the Browns
Final review of Valdovinos’ early 2021 three-round mock draft from the Browns perspective

The College football season hangs in the balance, as two Power Five conferences have already canceled their seasons. Mock drafts remain a fun exercise, especially amidst all of the chaos currently surrounding the season. Earlier this week, our very own Matt Valdovinos dropped a 2021 NFL three-round mock draft in which we will review the selections made for the Cleveland Browns. The Browns made the concerted effort to get defensive early and often in this three-round mock draft.

Browns add a versatile defensive back with 16th overall pick

With the 16th overall pick in the first round of Valdovinos’ three-round mock, the Browns were given Ohio State cornerback Shaun Wade. A player who could have been a first-round pick a year ago, Wade looks like he may have bypassed the 2020 NFL Draft for no reason as a final college season does not seem likely for him.

Jeremiah Bogan from With the First Pick is a big fan of Wade’s game, but having predominantly played in the nickel role for the Buckeyes, more tape outside of the numbers is needed.

He said: “Wade’s experience playing in the slot 90% of his career so far will pay huge dividends in him turning into a cornerback who follows a team’s best receiver. He has all the traits you want; it’s just a matter of getting more tape of him playing on the outside. Shaun Wade could be one of the best chess pieces in all of football, but he also has the chance to be an elite cornerback, which makes him a big-time player to watch.”

A top option at the cornerback position in a deep 2021 class, Wade makes sense at this draft slot and for the Browns (even if it does not seem like a fit on the surface). Second-year player Greedy Williams did not exactly meet expectations in his first season. If he struggles again in 2020, the Browns could look to upgrade the second most vital position in the sport of football; at the end of the day, teams can never have enough cornerbacks.

What other routes could the Browns have taken in the first round of 3 round mock?

While linebacker is more than likely going to be a top priority for the Browns to address, in a review of this mock, the top-three in the class in Micah Parsons, Dylan Moses, and Nick Bolton were already off the board. There are two other positions the Browns could look to address given a lack of depth entering 2021: defensive tackle and wide receiver.

Still, on the board at the defensive tackle position, Alabama’s Christian Barmore or USC’s Jay Tufele would have been two reliable options. Given 2020 third-rounder Jordan Elliott and Andrew Billings (who opted out of the season) are likely the only defensive tackles under contract beyond 2020; defensive tackle will be a high priority for the Browns.

Given the amount of money invested in their wide receiver room, the Browns may move on from Jarvis Landry after this season and look to progress with a younger and cheaper option. Upon review of this early 2021 three-round mock draft, wide receivers had flown off the board with names like Purdue’s Rondale Moore and Alabama’s Jaylen Waddle already gone.

However, names like LSU’s Ja’Marr Chase and Minnesota’s Rashod Bateman still lingered. If I had been tasked with taking on the selection of the Browns in this three-round mock, I more than likely would have opted for Minnesota wide receiver Bateman.

A review of Browns’ second-round selection in this mock draft

In the second round of Valdovinos’ three-round mock draft, the Browns did address the interior of their lacking defensive line with the selection of the athletic UCLA defensive tackle Osa Odighizuwa with the 48th overall pick. Upon review of this draft selection, there is little opposition to increasing the depth of a shallow defensive line group, and one that will likely get slimmer after the 2020 season.

Going one pick after Odighizuwa landed in Cleveland was the versatile Notre Dame defender Jeremiah Owusu-Koramoah. Given the versatility defensive coordinator Joe Woods loves to deploy, especially in nickel and dime packages, a player like Owusu-Koramoah would be an ideal fit in pass-heavy situations.

The Browns are also lacking depth off the edge behind the two starters in Myles Garrett and Olivier Vernon. Vernon is also on the last year of his deal, making pass rusher a massive hole on the roster as well. Temple-to-Miami transfer Quincy Roche would have been an excellent fit for the Browns with the 48th pick in this early three-round mock draft as well.

Looking at the third-round picks of the Browns

The Browns then entered the third and final round of this mock draft with two picks to wrap things up. With the 80th pick, Valdovinos opted to select Washington edge rusher Joe Tryon, then finished the mock by giving the Browns Auburn wide receiver, Seth Williams.

Other names to consider in the third round for Browns

Given the talent on the board and the positions of priority on the Browns’ roster, there is little opposition to either of these selections. However, one player not selected in this mock who is likely to make an excellent interior offensive lineman at the next level is Northwestern’s, Rashawn Slater.

Right now, Wyatt Teller is penciled in as the starting right guard for the Browns after Drew Forbes opted out of the season. Should he fail to pick up where he left off at the end of the 2019 season and struggle in Kevin Stefanski’s offensive system, adding, the agile Slater would be a win in Cleveland.

Given the most significant needs on the roster for the Browns is their defensive line, both inside and out, wide receiver, linebacker, and offensive guard, Valdovinos did an excellent job of filling those voids with the four picks here. There was just one major disagreement, a cornerback may not be a big enough priority to take in the first round, and the Browns could have landed a high profile wide receiver or defensive tackle instead.

However, as previously mentioned, cornerback is the second-most vital position on the football field, and there is no such thing as having too many defensive backs. Upon review, the Browns and their fans would be highly excited about landing the names presented in this early 2021 three-round mock draft.