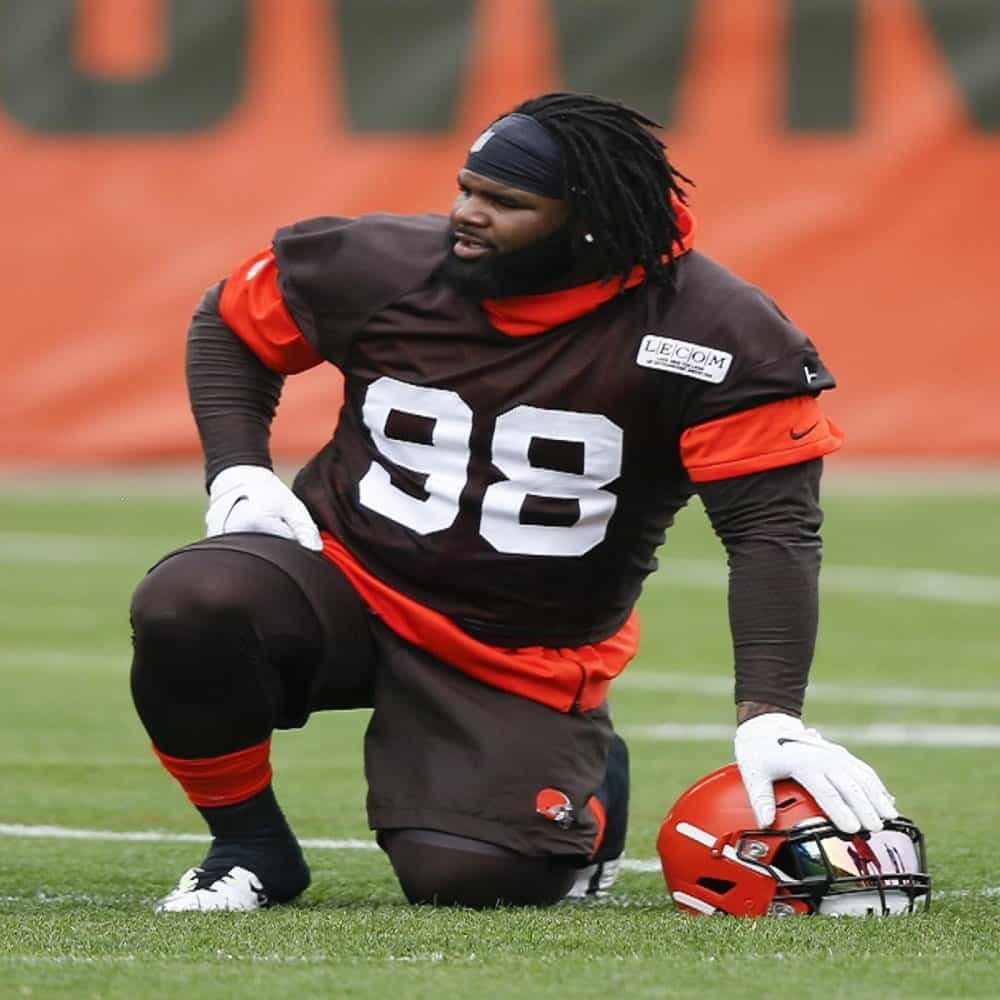 The Cleveland Browns built an offensive superteam this offseason, but we cannot forget that they also added significant players to their defense.

With the king of defense Myles Garrett leading the charge, the Browns defense will be crucial to the team’s success.

As we continue the explore the top ten Browns players heading into 2019, we take a look at another defensive player. Next up is No.9: Sheldon Richardson

Sheldon Richardson was drafted 13th overall by the New York Jets in 2013 and spent four seasons with the Jets. Richardson was the NFL Defensive Rookie of the Year in 2013, registering 77 tackles and 3.5 sacks.

Richardson made his lone Pro Bowl appearance in 2014 when he had 66 tackles, 11 tackles for a loss and a career-high eight sacks in 16 starts. With his stock at its peak, Richardson started to face questions about his motivation and had some off-field issues.

In 2015, the former Missouri Tiger served a four-game suspension to begin the season after testing positive for marijuana. The following season in 2016, he was suspended for a game because of an arrest related to reckless driving.

The Jets trade Richardson to the Seattle Seahawks

Frustrated with their former first-round pick and wanting to move on, the Jets traded Richardson to the Seattle Seahawks right before the beginning of the 2017 season.

With the Seahawks, Richardson saw his production dive, and it appeared like the career of the former Defensive Rookie of the Year was heading in the wrong direction.

The Seahawks acquired Richardson to be a vital cog in the middle of their defense. He played and started in all but one game, but had career-lows in sacks (one) and quarterback hits (seven).

The one-year rental did not work for either side.

Chasing a Ring in Minnesota

The Minnesota Vikings were able to convince Richardson that a one-year, $8 million deal would be worth his time. He presumably left big-money deals elsewhere in search of a championship in Minnesota. The Vikings finished the 2018 season with a mediocre 8-7-1 record.

With the Vikings, Richardson appeared in all 16 of the team’s games. He recorded 49 total tackles (six for a loss), 16 quarterback hits, which tied for 10th in the league among defensive tackles, and 4.5 sacks. He graded out as the 47th ranked interior defender in the league, according to Pro Football Focus.

Although the championship quest failed, Richardson did prove in Minnesota that he can still be a force in the middle of a defense. He signed a one-year prove-it deal and it paid off as he revisited free agency in 2019.

The Cleveland Browns started their free agency spending splurge by beefing up their interior defensive line, signing the 28-year-old Sheldon Richardson to a three-year, $39 million contract, with $21.5 million guaranteed.

Richardson is joining his fourth NFL team and has started all 32 games the last two seasons and 87 of 89 games in his career.

Sheldon Richardson believes he finally found his home in Cleveland:

“I do things here and there that might not show up on the stat sheet, but I definitely feel like I’m still one of the elite D-linemen in the league,” Richardson said. “I just haven’t had a chance to find a home yet, and I think I found it here.”

The Browns did have tons of cap space to make a move, and this was an obvious choice to go after Richardson, ranked as the No. 10 overall free agent by NFL.com.

Richardson is a three-technique interior lineman who is a solid run-stuffer and uses his 300-pound frame to create a push up the middle. The Browns were in desperate need to replace 2018 starter Trevon Coley, who shouldn’t be starting on a defensive line in the NFL.

The Browns were horrible versus the run last season, giving up 135.2 yards per game, which finished 28th in the league last season. They also allowed the second-most rushing touchdowns in the league with 20. Additionally, they ranked 30th in yards surrendered (393) and 21st in points (24.5) — according to NFL.com.

Richardson will line up in the trenches next to Larry Ogunjobi, who broke out last season with 5.5 sacks and 15 quarterback hits. This pairing should be able to provide an inside pass rush and be a solid run-stuffing duo.

The signing of Richardson and trading for defensive end Olivier Vernon makes the defensive line one of the strengths of the 2019 Cleveland Browns. New defensive coordinator Steve Wilks will have tons to work with on the Browns defensive line. Most impressively will be Myles Garrett who led the team in sacks last season with 13.5. These additions, along with the growth of Garrett, should propel the Browns to accumulate more than the total 37 sacks last season, which finished in the bottom half of the league.

The Cleveland Browns required help desperately on the defensive line as they headed into the 2019 season. With the acquisitions of Sheldon Richardson and Olivier Vernon, they will impact the Browns defense to the level of a playoff contender. Richardson will provide the interior push which will help stuff the run and contribute to more rushing lanes for Garrett and Vernon, making the Browns defense a force to be reckoned with in 2019.