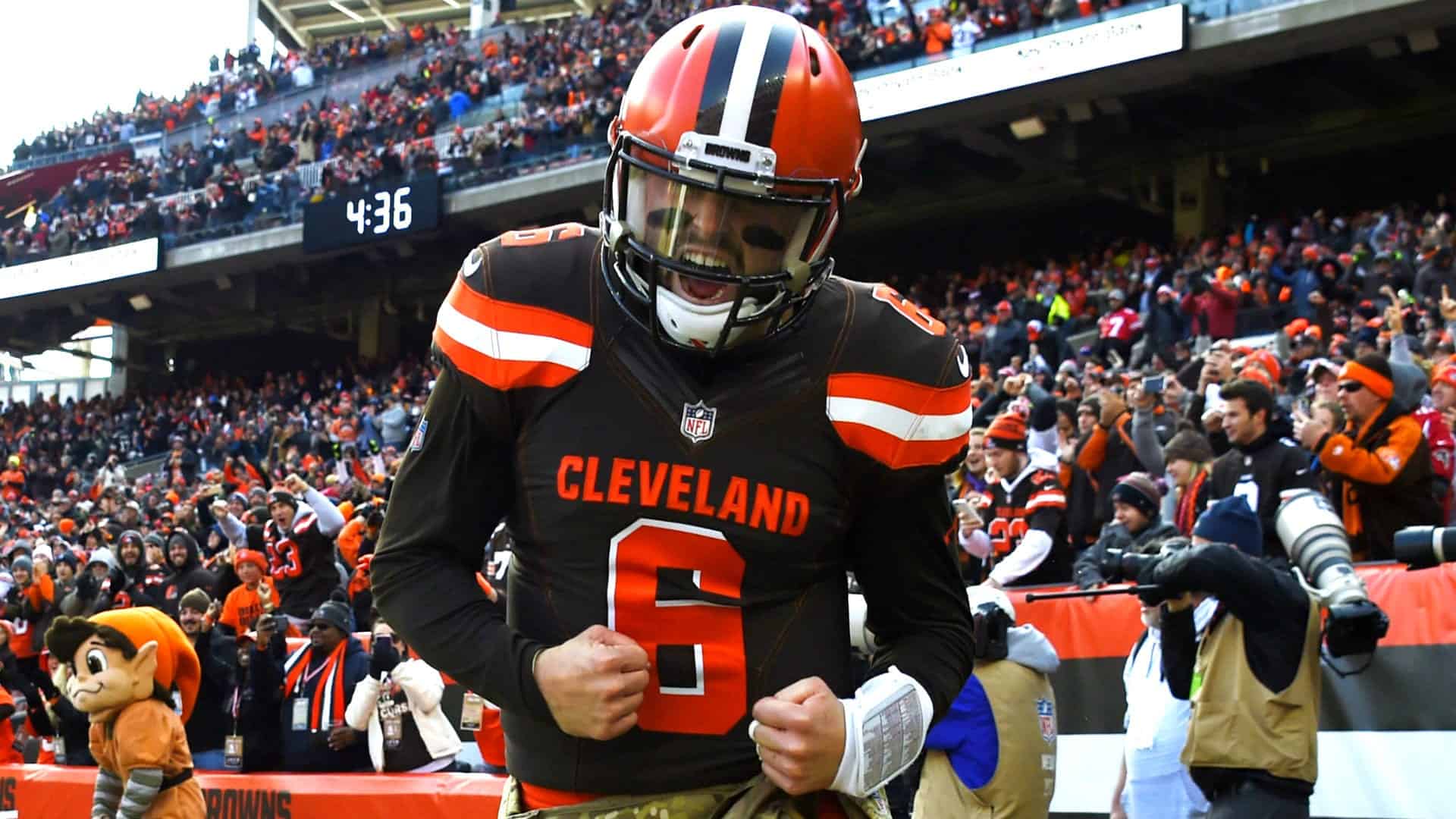 Photo Credit: Sporting News
What's in this article? Click to show
With the NFL schedules being released late Wednesday, Las Vegas has set an over/under for each team. The most beloved and hyped Cleveland Browns are sitting high at 9.5.
Odell Beckham Jr.
Kareem Hunt
Olivier Vernon
Sheldon Richardson
Final Verdict

With the NFL schedules being released late Wednesday, Las Vegas has set an over/under for each team. The most beloved and hyped Cleveland Browns are sitting high at 9.5.

From the over/under sets we can determine that the Cleveland Browns are projected to win the AFC North. The next team in the division is the circus show of the Pittsburgh Steelers with nine. In Cleveland, celebrations and parades won’t be going on for each win as the new additions now make wins an expectation.

The Browns have picked up several great players. We will be looking at Odell Beckham Jr., Kareem Hunt, Oliver Vernon, and Sheldon Richardson.

Odell Beckham Jr. is obviously a great addition as he will complete the receiving core in Cleveland. He will be reunited and play side-by-side with his friend and elite slot receiver, Jarvis Landry. Beckham Jr. will add a variety of traits and talents to this soon to be powerful offense.

First of all, he has a great IQ and will be dangerous in the red zone.

The difference between a good receiver and a superstar receiver is running the route and stopping or running the route then adjusting to the coverage to find the openings. In this clip, Beckham Jr. runs a 10-yard curl and stops on the goal line.

He notices that the defender guarding him is near and so is the safety playing right over him. Beckham Jr. breaks the original route and runs the red line where he goes behind the coverage. He finds the opening in the back of the endzone.

In this clip, Beckham Jr. runs a bend route and catches it for about a 15-yard gain. He opens up space through great route running.

Beckham Jr. acts like he is running a streak and waits to breaks the cornerback’s cushion. Once he notices the corner open up his hips, Beckham Jr. uses his eyes to act like he is about to break downfield and takes a hard cut with his left foot. The hard cut causes the defender to lose him with Beckham Jr. turning to the corner’s blindspot.

This causes a wide open gap and easy catch. Not only was the route perfect, but his speed will be dangerous and can be used in the deep game.

In the above clip, Beckham Jr. uses his speed to restack the corner so that he is right on top of him and the corner cannot catch up. His one-of-a-kind hands and speed allows him to break free from coverage and create this big play.

Beckham Jr. will create several options in the passing game with Landry, but the run game will have some firepower too.

As long as Kareem Hunt keeps himself out of trouble, he can return to form as a top-5 running back in the league. He is one of the few backs in the NFL that is a true dual-threat RB similar to Le’Veon Bell.

First of all, he is strong and fast. In this clip, it’s a simple power run to the right. Hunt notices the gap is in between the tackle and tight end so he jump-cuts and turns on the jets so he can break through the initial defenders. He breaks to the sideline and uses his power as he shrugs off a defender too. His run game is good, but Hunt can and will be used as a receiver too.

In this play, Hunt is running a wheel route where Mahomes rolls right. Mahomes throws on the run to Hunt in stride. Hunt’s speed and willingness to alter his route makes him a stronger receiver than most running backs.

Although the offense is the most beloved part about the Browns, the defense had some big additions too.

According to Pro Football Focus, Olivier Vernon was 15th out of 186 edge defenders in overall grades. He was also 7th for pass rush grades too.

His run defense is not as strong but still lands him in the top 25% in the NFL.

Despite not making the tackle, Vernon makes the perfect play in this clip. Vernon was playing right end with a run going to the left side of the field. Vernon’s capability to cap off the outside gap and shove the left tackle almost into the running back causes the back to cut inside to all the defenders. Vernon does his job to force the back inside and not allow any yards.

In this clip, Vernon fights through the left tackle with an initial bull rush to a rip move then chased down the quarterback. Again, although he does not make the tackle, he makes a huge play by crashing the pocket, forcing the quarterback to scramble for a few yards. His hustle and determination are amazing as he never gives up until the quarterback slides.

Richardson is not the elite defensive lineman like he was for the New York Jets a few years ago, but he is still a big addition to this defensive front. He will be a strong wreck force in the A and B gaps. Richardson will shut down some run plays like he does in the clip below.

Richardson is able to break through a double team and decides to teach the running back a lesson for running his way by lifting and tossing him backward.

Overall, the Browns can easily win the AFC North with around 10 wins. The additions will help the run and pass game as well as create mismatches in the trenches. The one thing that may hold the Browns back is the defensive backs.

Denzel Ward was one of the best rookie defenders in the league last year, but Jabrill Peppers was the swiss army knife of the defense and the Browns had to trade him in order to pick up Beckham Jr. Everything else looks like it is nearly ready for a Super Bowl run.