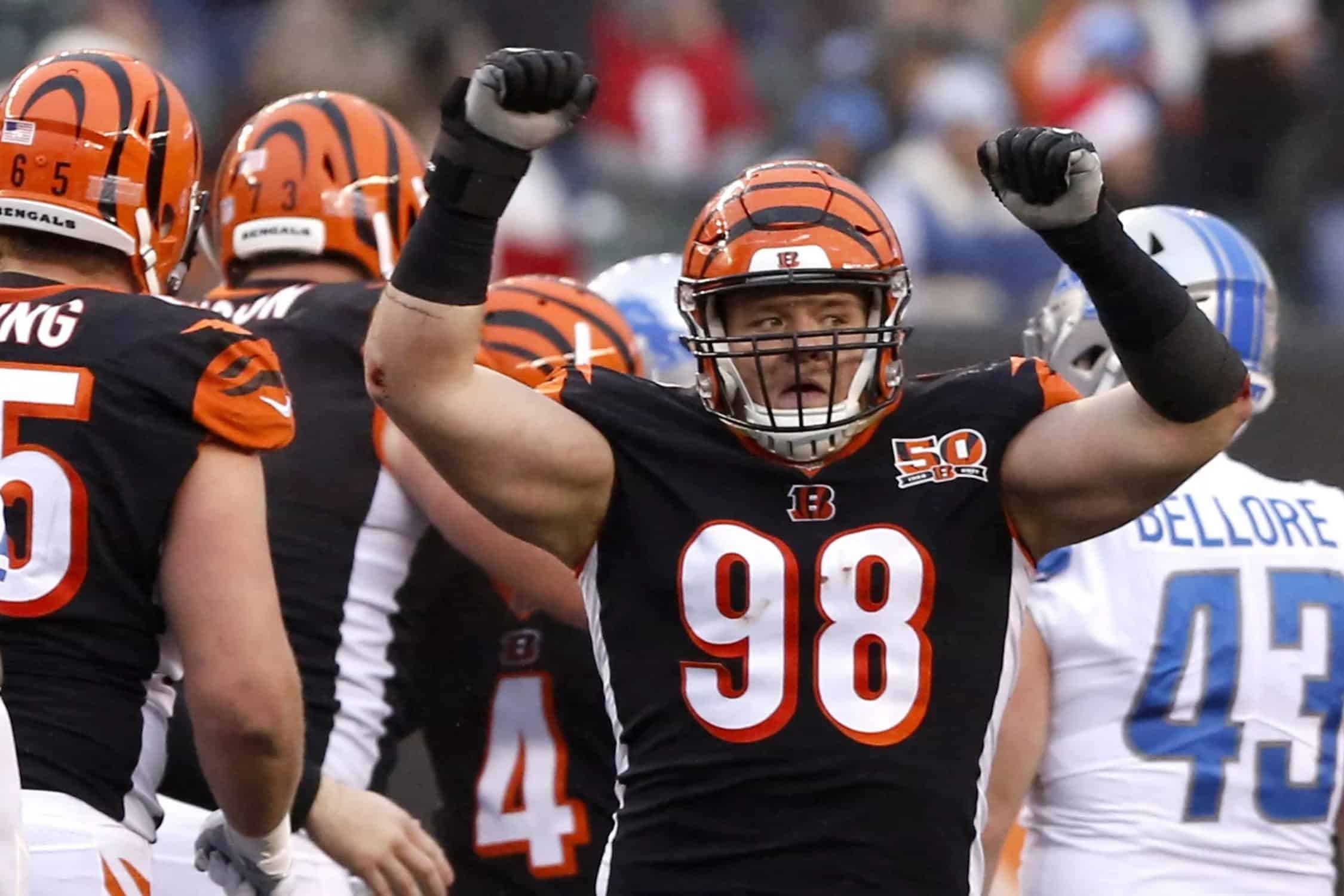 When you think of muscled men grappling it out for ultimate supremacy, you may think NFL training camp, or maybe even World Wrestling Entertainment. It’s in that spirit that we look at some key position battles set to take place during the Cincinnati Bengals 2019 training camp. That’s right…It’s time for the Cincinnati Bengals position battle pay-per-view!

This one looked good on paper when the PPV card was put together (a.k.a. when the Bengals traded up to draft Finley). After a poor showing by Finley in minicamp, it looks more like a good old-fashioned squash match. Despite his collegiate accomplishments (three-year starter at N.C. State, 2018 First Team All-ACC, William V. Campbell Trophy finalist, awarded to the top scholar-athlete in the country), Finley is no match for Dalton’s experience. A 2019 promotional video recently released by the Bengals prominently features Dalton, so it looks like at least for 2019, Dalton is the team’s unquestioned quarterback.

Wait just a minute…is that outside interference from undrafted free agent Jake Dolegala? Although the Central Connecticut State product looked like a camp arm signing, his minicamp performance says otherwise. Dolegala capped off a strong week of practice with three touchdown passes during the 11-on-11 sessions in last week’s practices. He seems to be carving out a practice squad role for 2019, with a potential mid-card match-up with Finley down the road for the right to be called Cincinnati’s future QB.

This fight started when sixth-round pick Trayveon Williams told Cincinnati’s Fox 19, “I expect to have a day one impact.” Obviously entrenched third-down back Giovani Bernard would take umbrage to this, and here we are with what amounts to a 205 Live match-up, a.k.a. the cruiserweights. The speedsters’ combined weight barely tops that of the Baltimore Ravens tub of run stop defensive tackle, Michael Pierce.

Bernard has been a reliable third-down back since he was drafted in the second round of the 2013 draft. He’s in the final year of his contract and is slated to make $4.5 million in 2019. Bernard is coming off a season where he recorded his fewest number of receptions (35) and a measly 3.8 yards-per-carry. If released, the team would only be on the hook for $750,000. Team owner Mike Brown doesn’t like dead cap money, but he also likely doesn’t enjoy paying $128,500 per reception. That’s exactly what he’ll do if Bernard has a repeat of 2018.

Meanwhile, Williams has received extra reps in minicamp with starter Joe Mixon and fellow rookie Rodney Anderson both sitting out. He made the most of those reps and flashed as a receiver. Both Bernard and Williams should put on a show during camp and pre-season as they fight for a similar role on the team. Given Bernard’s salary, Williams impressive showing thus far, and Mixon’s all-purpose ability, the Bengals may not need Bernard in 2019.

Match Result: Williams stuns the crowd with a scintillating upset win over the veteran Bernard, who becomes a cap casualty.

Trayveon Williams is a SPECIMEN at his size. Really stands out. Exudes confidence.

“I expect to have a day one impact.” #Bengals @fox19 pic.twitter.com/M0YC3qKgKf

We’ve got ourselves a classic triple threat match as the youngsters fight over the fifth and possible final wide receiver spot. A.J. Green, Tyler Boyd, John Ross, and Alex Erickson appear to have the top four spots locked up. The Bengals have a tough decision to make here with three talented players that bring different skill sets to the field.

Cody Core remains an enigma in Cincinnati. He was picked in the sixth round of the 2016 draft, envisioned as an eventual replacement for the departing Marvin Jones. It never happened as Core has just 30 receptions in three seasons. Like most Bengals, 2018 was a rough season for Core. He dropped passes in key situations during the season and dislocated his elbow in Week 17. Core has been a full participant in minicamp this offseason and will need to impress on special teams to make the team.

Josh Malone has the best draft pedigree of the three as a fourth-round pick in 2017. Despite this, he’s only started seven games and logged just seven receptions for 75 yards and a touchdown in his career. That’s a good stat line for a single game, but not all that impressive for a two-year career. He’s a deep threat but still developing as a complete receiver. Malone struggles to create separation on anything other than deep routes and needs to work on using his hands as a receiver.

Stanley Morgan Jr. is the antithesis of Core and Malone. He’s a 2018 undrafted free agent. He’s not a physical specimen like Core and Malone, standing at just 6’0” with a 4.53 40-yard dash time. What he does offer is polish at the position that the other two don’t have. Core and Malone are classic deep threats but not consistent receivers. Neither caught more than 50 balls in a season in college. Morgan Jr. leaves Nebraska as the program’s most prolific receiver, with 189 receptions for 2,747 yards and 22 TDs.

This should be a great camp battle with plenty of highlights from all three players. Taylor will have to decide what he wants from his receiving corps before making a final decision. This will come close to a time limit draw, with the decision likely coming on final cut down day.

Match result: A rare triple threat match with two winners. The Bengals keep six receivers including Morgan Jr. and Malone, with Core is the odd man out and loser of the match.

This isn’t a roster battle, as both Miller and Jerry are expected to make the team. This match-up is more like a title match, with the winner named the Bengals reigning, defending, and undisputed starter at right guard. The Bengals signed Miller in March and penciled him in at right guard. He was a four-year starter in Buffalo on a line that finished top-ten in rushing all four of those seasons.

However, as offseason OTA’s began, the team signed former New York Giants guard John Jerry. Though the move appeared to be for depth, Jerry does bring a formidable resume to the squared circle. He started 56 games in four years in New York and has fresh legs after sitting out all of 2018.

Jerry also has a foreign object tucked away in his trunks in the fact that he has a history with new head coach Zac Taylor. During last week’s minicamp, Taylor said, “I have a history of working with him in Miami, so he’s a guy that’ll jump into the mix.”

Just before the Jerry signing, Bengals 2019 first round pick Jonah Williams went down with an undisclosed injury, prompting some shuffling on the offensive line. Taylor says the two are unrelated, but it doesn’t seem coincidental. If anything, Williams’ injury reminded the team how little depth it has on the offensive line.

Match result: Miller retains the title of starting right guard, and Jerry is relegated to a valuable reserve spot on Cincinnati’s 2019 offensive line.

They’ll have to reinforce the ring for this one! We’ve got 627 pounds of girth clashing to determine who will start next to Geno Atkins. Both players offer a similar run-stuffing style that pairs nicely with Atkins pass rush and explosiveness. Glasgow was limited to just three games last year after tearing his ACL in Week 3 vs. the Carolina Panthers. He’s a try-hard overachiever expected to answer the bell and be ready to go for training camp. Billings is the incumbent starter and was serviceable in 16 starts last season. He racked up 54 total tackles, 8 for a loss, and 2.5 sacks.

Match Result: Expect a double-DQ here in quite the slobber knocker. Billings will likely begin the season as the starter as the team eases Glasgow back into full-time action after his ACL injury. They’ll likely rotate on the line throughout the season depending on scheme and game situations.

Travis Yates is a writer for PFN covering the Cincinnati Bengals. He’s also a co-host of the AFC North & Goal Podcast as a part of PFN’s Podcast Network. You can follow him @TheTravisYates on Twitter.

In this article:Andy Dalton, Featured, featured