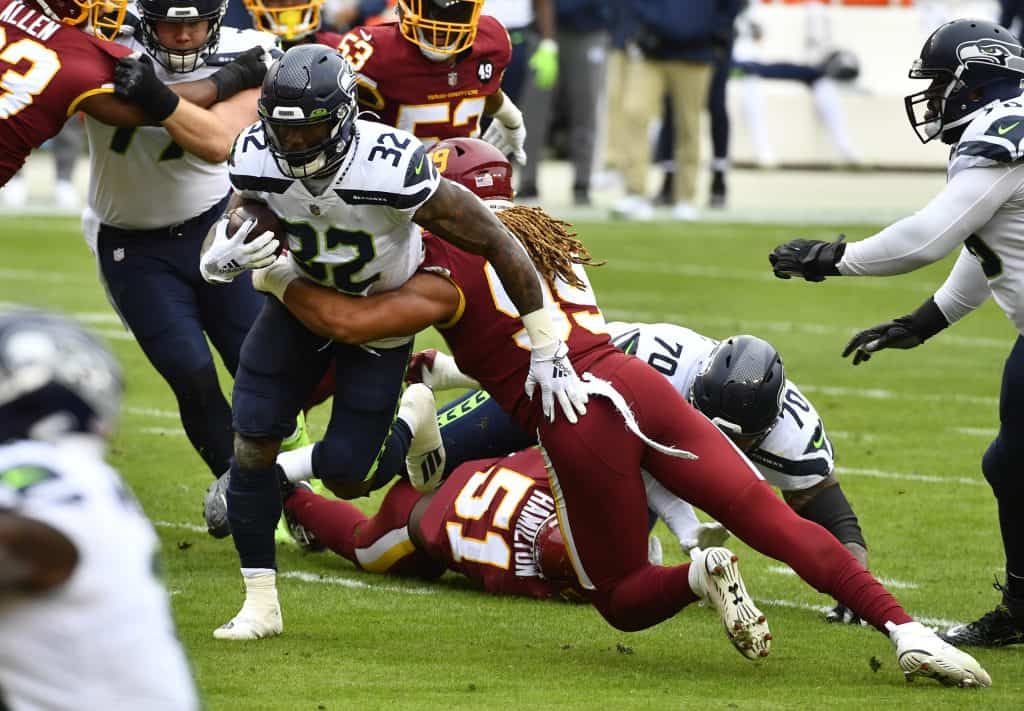 Coming off a topsy-turvy 2020 NFL season, what are the potential landing spots for Seattle Seahawks running back Chris Carson in free agency? With limited rumors surrounding the running back position, could we see Chris Carson sign today, and where are his possible destinations?

The running back landscape seems to be somewhat limited currently. Most teams are looking to bring in cheap, role-type backs as opposed to feature backs. That has led to a slow market for the running back position, but could we see that start to change?

The rumors of Chris Carson coming back to Seattle have been somewhat muted. The Seahawks are in an interesting spot with both Rashaad Penny and DeeJay Dallas on the roster. Therefore, they are unlikely to be willing to invest a large chunk of money into bringing back Carson early in free agency.

If Carson’s asking price begins to drop, the Seahawks could have interest in bringing him back. However, they may look to move on one of the backs in the lower tiers at the position.

After Frank Gore became a free agent, the Jets have seemingly been linked to every single free-agent running back. Still, the prevailing rumor right now is that the Jets will look to the draft for a running back instead of bringing in an established back.

Chris Carson would be an interesting fit in New York. We have seen how the 49ers utilize their running backs, and the Jets are likely to utilize a similar scheme. Carson can also be a solid weapon both on the ground and through the air, which would make him a good fit.

The Pittsburgh Steelers need a back to replace James Conner. The Steelers have generally been linked to a back in the draft, but they may look to bring in a veteran as well. Chris Carson would be an interesting fit for them, as we know he can put up solid numbers.

Over the last three years, Carson has consistently been above 4.5 yards per attempt on the ground. He has also scored 21 rushing touchdowns and 7 receiving touchdowns in those past three seasons. Carson could be the ideal lead back for the Steelers, with Pittsburgh looking to maximize what could be the final year of Ben Roethlisberger’s career.

The Atlanta Falcons are such an intriguing position for potential running back signings. They are set to enter the 2021 season with Ito Smith and Qadree Ollison as their lead backs. While the rumors around the running back position have been somewhat quiet, it could be an interesting destination for Chris Carson.

Arthur Smith comes to Atlanta on the heels of great offensive success with Derrick Henry. While Carson is not the same style of back as Henry, if the system is the key, Carson could find ample success in Atlanta. One slight concern for Carson could be the Falcons needing two new linemen after losing James Carpenter and Alex Mack this offseason.

We have seen a few players move between the Seahawks and 49ers, but could Carson be an option to do just that?

It seems unlikely with Jeff Wilson and Raheem Mostert both on the roster. However, the 49ers could move on from Mostert, who expects to be a free agent next offseason.

The 49ers believe in a committee style, but they have also shown a willingness to pay up for backs. On the other hand, they did that for both Jerick McKinnon and Tevin Coleman, only to see both struggle with injuries. That could count against Chris Carson this offseason.

Sources have told PFN that the Miami Dolphins are in the market for Chris Carson. The Dolphins were expected to be in the market for a running back in the 2021 NFL Draft. However, by adding Carson they would have a group of three experienced backs in Carson, Myles Gaskin, and Malcolm Brown competing for the starting role.

What is Chris Carson’s potential market value in free agency?

After making a limited impact as a rookie, Chris Carson had two big years in 2018 and 2019. He amassed a total of 2,381 rushing yards with 16 rushing touchdowns. His role in the receiving game was somewhat limited, but he added another 429 yards and 2 touchdowns.

The 2020 season saw Carson struggle with injury, missing four games. He still managed to rack up 681 rushing yards and score 5 rushing touchdowns; he also added 287 receiving yards and another 4 touchdowns.

Spotrac currently projects Chris Carson on a four-year deal worth $7.4 million per year. They compare him to Joe Mixon, Todd Gurley, Melvin Gordon, and Kareem Hunt. Those four combined have an average contract length of 2.3 years with a value of $9.1 million.

Statistically, Carson ranks slightly below that group, which is why his value projects to be slightly less. With the running back market slow to begin free agency, Chris Carson could find himself having to take a prove-it deal in 2021.