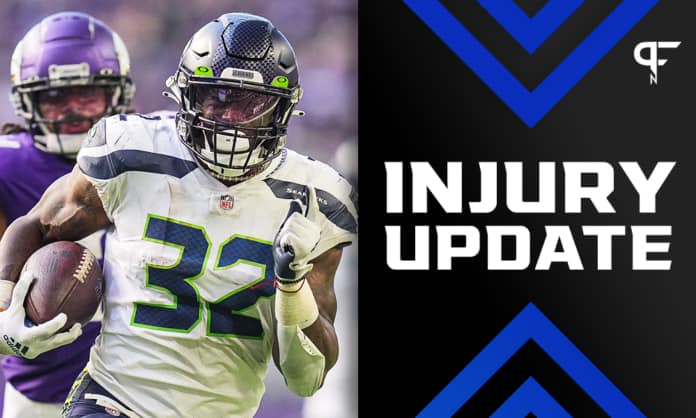 Chris Carson Injury Update: Can he or Alex Collins be a fantasy starter in Week 5?

Currently dealing with a neck injury, is Chris Carson worth starting for fantasy football on Thursday night against the Rams? Is Alex Collins?

By BJ Rudell
October 7, 2021
What's in this article? Click to show
Chris Carson’s production and injury history
Can Alex Collins step up?
Is Carson or Collins startable?

When he’s healthy, Chris Carson is a weekly fantasy football starter, but the Seattle Seahawks’ bell cow is dealing with a neck injury. Is he or Alex Collins worth starting in fantasy this Thursday?

Update 10/7/2021: Chris Carson has officially been ruled out for tonight’s contest against the Los Angeles Rams. Alex Collins will likely get the nod as the starter but split work with DeeJay Dallas and/or Travis Holmer.

Those who drafted Carson this summer at his RB16 ADP knew what they were getting into. No one questions his ability, especially in a plus offense that usually features no more than four major fantasy performers: Carson, Russell Wilson, DK Metcalf, and Tyler Lockett.

Last year, Carson was the RB14 in points per game. In 2019, he was the RB13 and the RB16 the year before that. You know what you’re getting with Carson: RB1/2 production, efficient running (4.6 career yards per carry), and enough passing-game usage to maintain a low-end RB2 floor.

However, in his first four seasons, Carson hasn’t been able to stay on the field. He missed 12 games in his rookie campaign in 2017 because of a broken ankle. In 2018, a hip injury sidelined him for two contests. Another hip issue knocked him out for 1.5 games in 2019. Last season, a foot sprain cost him four games.

So this is what you get with Carson — a rock-solid fantasy contributor with an injury history that constantly looms in the future. And based on Carson’s neck injury, the future is now. He missed practice Tuesday and Wednesday.

Can Alex Collins step up?

The 27-year-old Collins turned heads last week with a surprisingly robust 12 touches next to Carson’s 14. Collins ran well, scored, and appeared to be one of the biggest waiver adds heading into this week. A former bellcow himself, Collins is capable of taking on a full workload if needed. That’s why he was a must-add RB this week.

Is Carson or Collins startable?

As savvy fantasy managers know, an injured player who plans to “give it a go” is not a recipe for success. We managers want clear reports and easy decisions. If Carson sits, Collins should get the brunt of the backfield touches. If Carson is a full go, it’s fair to believe he’ll be the lead back again, and Collins will fill in when needed.

But given how close we are to kickoff, it’s natural to feel confused about which decision is the right one. Start Carson in fantasy if he starts? Or start Collins in fantasy if Carson sits?

Adding to the confusion is the Rams’ run defense, which is yielding the sixth-most rushing yards per carry (4.7). It sounds like we’re starting a Seattle running back, right? Not so fast.

The Rams have given up two big runs this season — one to David Montgomery (41 yards) and the other to Chase Edmonds (54 yards). If you remove those two gains as relative outliers, the Rams’ run defense is No. 9 in the league (3.9 yards per carry).

They did such an excellent job against the Buccaneers that Tom Brady was their leading rusher. Furthermore, they almost completely shut down Jonathan Taylor and Marlon Mack in Indianapolis.

So even in a perfect fantasy world where Carson or Collins was in line for 20+ touches, it would be hard to trust either as more than an RB2/3. Seahawks head coach Pete Carroll says that Carson will be a game-time decision. If Carson plays, all bets are off, as partial usage probably won’t lead to much success against Los Angeles.

It doesn’t mean you don’t start one of them. But you need to understand the risks, especially if Carson is out there Thursday night.