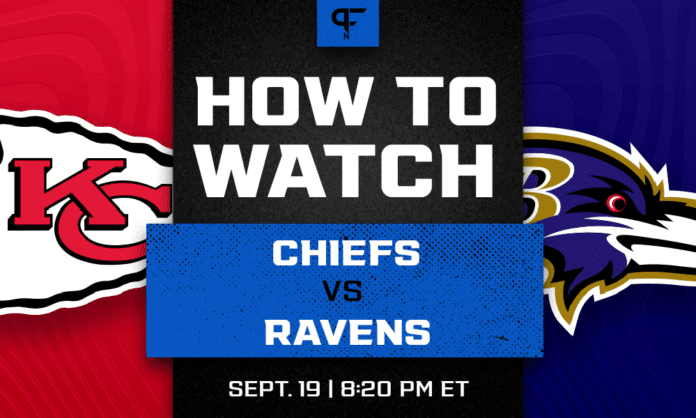 What are the Chiefs vs. Ravens odds and prediction, what channel is the game on, and how can you stream the Sunday Night Football matchup?

The Kansas City Chiefs vs. Baltimore Ravens headline the NFL Week 2 schedule, highlighted by the Sunday Night Football nod. The Chiefs needed to mount a comeback in Week 1 while the Ravens lost in a crazy ending in Las Vegas on Monday night. Let’s look at the current NFL odds, TV channel, how to live stream, and a prediction for the Chiefs vs. Ravens Sunday Night Football matchup.

When the Chiefs and Ravens battle at 8:20 PM ET on Sunday Night Football, it’ll be the 11th regular-season meeting between the two teams. The Chiefs have won the past four contests dating back to 2015; three of those games have included quarterback Patrick Mahomes under center. Kansas City outscored Baltimore by a total of 94-72 in those tilts.

The last Chiefs vs. Ravens matchup took place 12 months ago, with Kansas City winning 34-20. Mahomes threw for 385 yards and 4 touchdowns while quarterback Lamar Jackson managed just 97 yards in the air plus an additional 83 yards on 9 carries.

As with any new season, things are different than they were 12 months ago. Most notably, Baltimore’s rushing attack will look much different than it previously did following injuries to the Ravens’ top three running backs. To make matters worse, the Ravens are also without one of their top cornerbacks in Marcus Peters.

Injuries put Baltimore in the hole against a high-powered Chiefs offense that scored 33 points against a solid Browns defense in Week 1. Additionally, the secondary will be tasked with defending the duo of Tyreek Hill and Travis Kelce — the receiving duo combined for 11 receptions, 164 yards, and 1 touchdown vs. the Ravens in 2020.

The one man missing in Kansas City’s aerial attack from last year is Sammy Watkins, who now suits up for the Ravens on Sundays. In his debut for Baltimore on Monday night, he led the team with 96 receiving yards.

Will the Ravens buck the losing trend vs. Kansas City?

Baltimore essentially had a win in their pocket multiple times throughout their Week 1 matchup against the Raiders. In one of the craziest MNF games in recent memory, the Ravens went home losers after being the road favorites.

Meanwhile, Kansas City needed to mount a comeback to defeat the Browns and keep Mahomes’ September record flawless. The script has flipped, with Kansas City traveling and Baltimore sticking on the East Coast. However, the Chiefs are the favorites, and rightfully so. With a week under the offensive line’s belt and Tyrann Mathieu and Frank Clark coming back on defense, it’s Kansas City’s game to lose.

How to watch Chiefs vs. Ravens this week