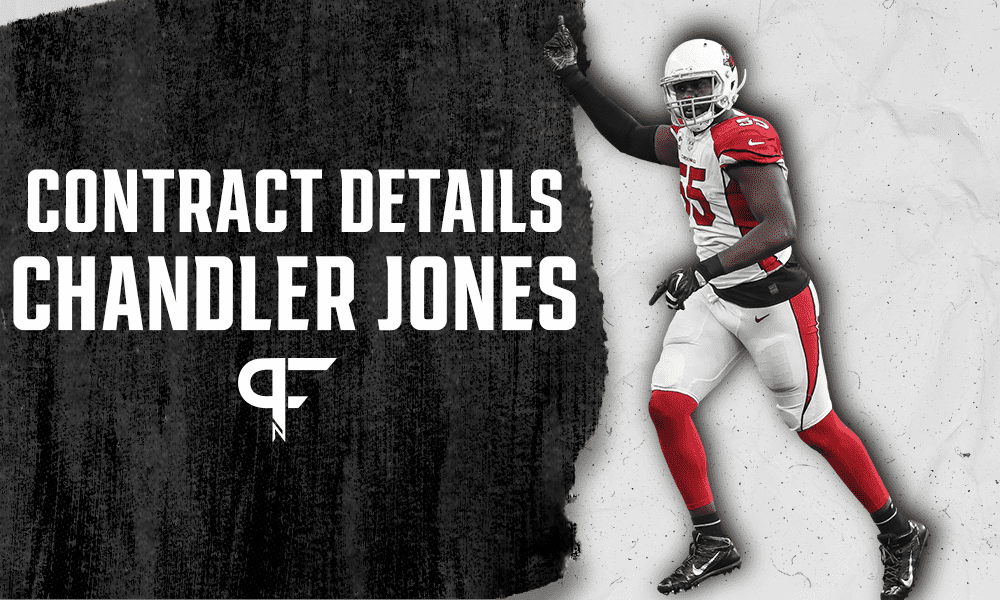 By Ben Rolfe
June 15, 2021
What's in this article? Click to show
Chandler Jones’ contract details and bonuses
What impact does Jones’ deal have on the Cardinals’ salary cap?
What options do the Cardinals have with Jones’ contract?
Want more NFL news and analysis?

Coming off the back of an injury-riddled NFL season, what is the situation with Chandler Jones’ contract in 2021? Let’s take a look at the structure of Jones’ contract, his impact on the Arizona Cardinals’ salary cap, and what options the Cardinals have with Jones.

The Cardinals restructured Jones’ contract in September 2019 by converting $7 million of base salary into a signing bonus, saving $4.67 million against the cap in 2019.

Jones has one year remaining on his contract

Since Jones signed his five-year deal in 2017, that means 2021 will be the final year of his contract. However, none of Jones’ salary for 2021 is guaranteed, meaning he could lose $15.5 million in salary if released ahead of the season.

What impact does Jones’ deal have on the Cardinals’ salary cap?

What options do the Cardinals have with Jones’ contract?

The Cardinals must have known that there would be some question marks surrounding Jones and his contract in 2021. After all, they committed to J.J. Watt for two years at $14 million per year in the offseason. That money could easily have been used to extend Jones entering the final year of his deal. Nevertheless, there are a handful of reasons why the Cardinals chose to prioritize acquiring Watt rather than extending Jones.

The Cardinals need to challenge immediately

The third season of the Kliff Kingsbury and Kyler Murray combination is likely to be crucial for several franchise members. Murray has shown flashes of brilliance, but Kingsbury has come under criticism, as has the Cardinals’ front office for hiring him out of nowhere. Thus, the Cardinals need to have some level of success in 2021.

If they do not, we could see changes at both head coach and general manager for the Cardinals. That is one reason why acquiring Watt for the 2021 season was more important than worrying about Jones’ contract.

Jones had an injury-riddled 2020 season

At age 30, the 2020 season was an inopportune time for Jones to miss his first game since 2015. Now 31, Jones would have been viewed as a risky player to extend this past offseason.

Despite registering double-digit sacks in the five previous years, Jones is now somewhat judged by that recent injury. The questions will remain: can he bounce back, and can he be relied upon for the next two or three years? Those question marks will have all played into the Cardinals’ concern when considering extending Jones’ contract in 2021.